Now, where were we? Ah yes, I remember.

It came to the first concert day, and everyone was well rested before the first performance of the tour. We’d all recovered from any travelling aches or hungers, but just to be sure we’d give the best performance we could, we spent most of that day resting in our rooms, and watching Madagascar 3 together. Brilliant movie, well I think anyways. We would’ve gone outside and done something peaceful, like the cinema; however the weather held us back.

The well-rested period had past, and we took our coach a short journey to the concert hall. We were shocked; never before had we seen such an interestingly designed venue, in an amazing Chinese style. It was really cool how the concert hall was almost identical to the theatre house, and the view of all the monuments around the square really was quite a sight. We hadn’t even seen the stage yet.

Time passes, and a sound-check later we’re resting in the changing rooms. A light snack and we were ready to perform, and I’m glad to say our first concert ever in Taiwan was great. One of the highlights was of course our version of the song ‘Moon’; in which we conquered the challenge of singing a full song in Mandarin.

It was quite a challenge to learn; Mandarin has lots of different ways to pronounce the words, so we had to watch a version sung before to get the idea. After a YouTube click, we’d get the English phonetic spelling. It would take far too long to learn from the Chinese symbols. Then comes the melody, staging, and like a good soufflé it was baked to perfection.

On stage, it was amazing to get such a huge reaction from the fans and people watching. From the very mysterious ‘ah’ opening, to Michael Ustynovych-Repa’s sweet final lines, it was a great experience. Of course, some of us had sung different language songs before in the Philippines and Japan; but this occasion was clearly very special to the Taiwanese fans. The English Translation was very interesting to hear, as well as the story behind why the moon is so special. 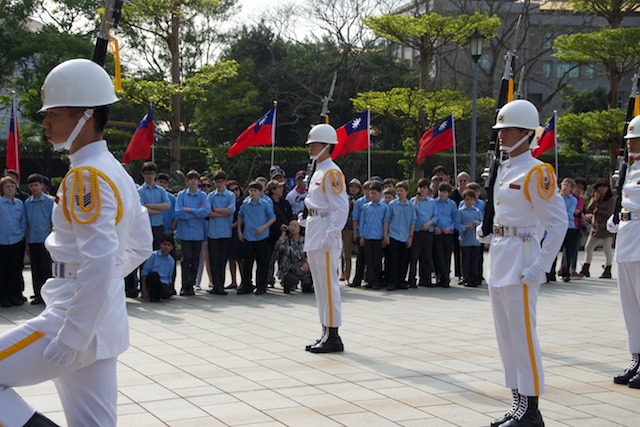 Throughout the tour, we were going to do 7 shows. The second was the day after the first on the Wednesday, same venue, and same time. It was pretty much a same day sort of thing, but on that day we saw the changing of guards in the Shrine to the Martyrs.The sun was beaming down, the birds were calling to their mum’s, and so we decided to go have a look at the beautiful Chinese monument. It was interesting; we spent most of the time arguing at how they kept their eyelids open for so long. Matthew Madine had a go, and was pretty good at it.

Well from all accounts Taiwan certainly was Terrific! I love your analogy of the perfectly cooked souffle 🙂 and glad too that you had some interesting ‘down time’. Looking forward with anticipation to the next ‘course’!

Whoever is doing the blog, well you are as good as your predecessors because you keep it simple and you tell the story from your perspective which is what we, the fans, want to hear/read. Well done and make sure you have lots of fun.

Your concerts in Asia seem to be going from strength to strength, so I think Guildford is going to be awsome. I hope also including the Moon-song!!

Thanks for your sharing, boys. I really have to say that you are awesome ! It was much more real that hear you singing rather than listening to a CD, me and the other audiences were so impressed by your performance, especially the song that you sung In Mandarin ”Moon represents my heart”. We knew that you spent lots of time practicing pronounces, and you really did a good job. It sounds just same as Taiwanese do, not hearing any strange accents, it was a perfect performance, let us know that there’s another way to interpretation this famous song. Here I would like to highlight Ben and Cassius, the two boys were so brave when facing the audiences that filled the concert hall and the one who sat next to me keep saying “He’s so cute!” while Ben speaking on stage which started with “Hello, it’s me, again”. Though it cost me NT$1200 for a seat at 2nd floor of Dadong Arts Center in Kaohsiung and NT$750 for two CDs, but it worth, a big thank to you for feasting our ears.

By the way, as a Taiwanese, I’m really glad that you like our country. Isn’t Taiwan a place that full of enthusiasm and energy? II have read the article above, and I have to say that there’s still lots of fun things and amazing scenes you haven’t experienced, so come to us next time, I believe that our country will give you much more surprises. Hope to see you singing at Taiwan again in the future, great job, boys!

Do come again soon, please！
We really enjoyed your music.

I went to the concert on April 2. Everyone did an amazing job! I can’t even tell who is the smallest or who is the most experienced! Glad to see some of the bigger ‘young men’ still stay with Libera and keep up the good works! It’s so emotional to see Libera as such a big family, no wonder your music can touch deeply in the mind! I am especially touched by the ‘Moon’ song. It took me so many years to learn Mandarin as mother language, and you guys just made it in such a moment with precise pronunciation and full of emotions. Speechless!! Libera’s concert is definitely once in a lifetime experience though I do look forward to go to your concert in the future! 😀
Also, these ‘terrific’ blogs are truly bonus for the Taiwan tour! Seems you guys had a good time in Taiwan, hopefully! It is always good to hear about the tour from your own perspective. As a loyal fan, if only you really enjoy the tour yourselves that I can truly enjoy going to your concert!! 🙂

Great performance, thanks a lot for coming to our country.

Hello Libera, I’ve seen all your video from youtube. It’s all so impressive, your voices, the arrangement and wow I even cried after seeing you. I love all your songs especially Adoramus. I thank to God to send all of you around us.
I couldn’t stop seeing George,Tom and Ben when they were singing. All of you look like angels, shining brightly with smile. I hope you visiting Indonesia and do performance here. I’m really really sure everyone would love your performance. Good luck for your next tour, may God bless you. And umm it’s a nice writing. I don’t know who’s the writer I just wanna say It’s excellent hehe.
Weny Indriana
East Java, Indonesia

You really did a GREAT JOB to the Mandarin song. Actually I enjoyed a lot in every song. So glad you came to Taiwan, especially in Hsinchu. haha. Have a wonderful tour. 🙂

Awwwwh. I’m sure I would have loved listening to you guys sing in Mandarin since I’m a non-Chinese, Chinese speaker (singer too, uhm sometimes) myself.
I do hope that you have a concert again in the Philippines. I’d like to hear you guys sing live before I go to college. God bless on your future trips and concerts!

Thank you, Libera, for the great concerts in Taiwan! Hope you all enjoyed your first trip to Taiwan, and hope to see you all again very soon. Can’t wait to read more about where you’ve been and what you’ve seen in this blog. God bless you all!

Hi guys!
Thanks for coming to Taiwan.
I know it must have taken you lots of efforts and time to practice Mandarin so well.
Both the speaking and the song “moon” are phenomenal.
And like the way how you describe what you saw in Taiwan, Its so creative and jolly.
Wish you guys enjoy your time in Taiwan, and hope we can listen to your angelic voices and “moon” again next year.

Your music saved my life.Please come back to the USA and sing with the Mormon Tabernacle Choir. Well, you dont have to, but that would be cool.

Hi everybody! I’m an italian girl from Verona and… yes, I’ve just a question… will you ever have a show in Italy? when you sing you seem just like angels and it would be wonderful if you could came here for a concert 🙂 (I’m sorry for my bad english, I’m learning 😉 ) bye guys! a kiss from Verona 🙂