Day three arrived with a mix of excitement and nerves – our first concert day. After breakfast we made our way to a nearby school. 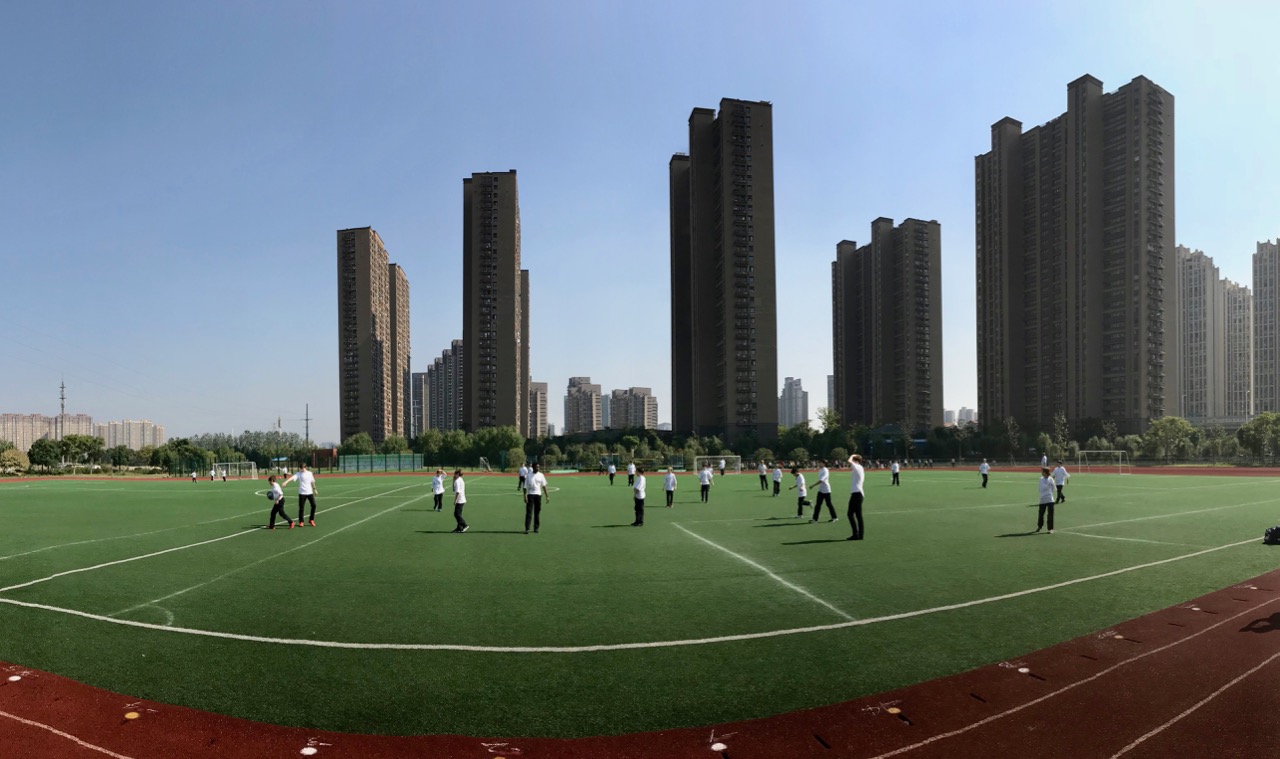 Again, we had the use of a large field and track area, plus, as it was a school day, we were all treated to a musical accompaniment over the loud loudspeakers which are all over the school and grounds – no tunes we could sing along to though. We noted that when the children came out at play time, the music was soft and pretty and soothing and gentle – none of which made any difference to our manic but silent game of football. We had a quick pit stop back at the hotel and collected our coats and blue concert bags containing our white performance shorts, socks and shoes.

Lunch was eaten in The London Bridge Coffee Restaurant which had many London bits and pieces to make us feel at home.   At the concert venue we changed into our robes and had another rehearsal. The venue was staggering, with what seemed like thousands of seats going from floor level up to the ceiling. The concert was thrilling and went extremely well. 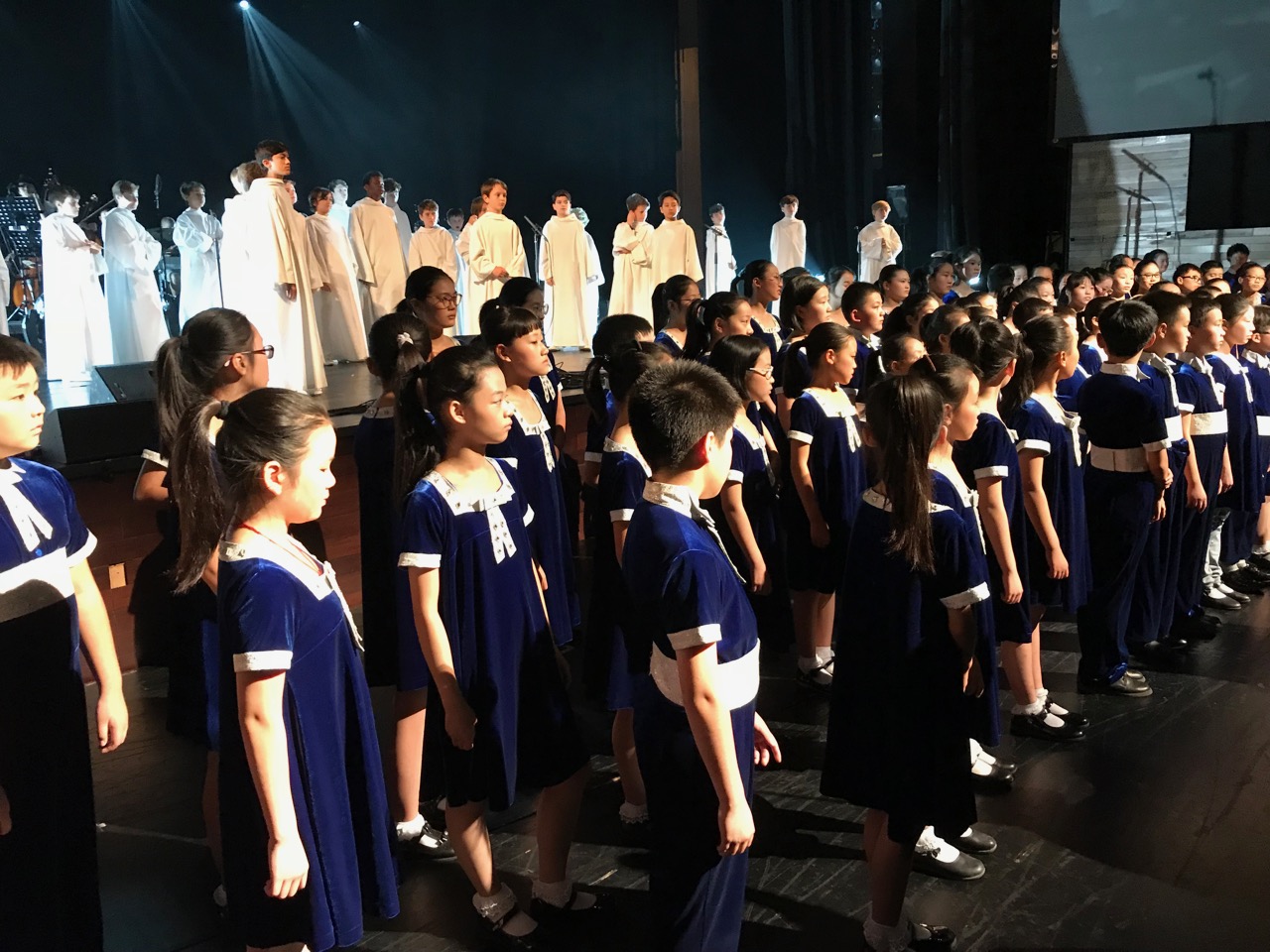 We performed Moon with the Wuxi Childrens Choir which was received very well. I’m not sure how good our Chinese pronunciation is, but I think we got away with it. It was a late finish to the concert and after hanging our robes up, we grabbed a quick supper at McDonalds – yes they have those in China too. Then straight back to the hotel and we managed to get to bed by 12:30am. Day four didn’t start too well. Unfortunately, there were gurgling noises as a number of boys went down with a stomach bug. With no time to stay in bed it was goodbye to Wuxi and on to the centre of Shanghai with sick bags at the ready. The coach took us straight to the venue where we had a sound check, at which point several alterations had to be made to the concert as seven boys were unable to perform due to illness – they were lying on the floor in the changing room, almost all of them soloists. In fact, one more went ill during the concert, so there was some surreptitious pointing to tell us to cover lines that might be missing. But the show went on, and all was very fine.

Afterwards we checked in to our hotel in Shanghai – an impressive building with sparkling golden furnishings and beautiful water features which we had time to admire in detail on account of it taking about 2 hours to get checked in. After a long day our heads finally hit the pillows at about 1am and a good sleep was had by all.

Day five dawned warm, bright and sunny. We had a bit of a lie-in which meant we recharged our batteries and were raring to go. We donned our blue shirts and grey trousers and went to explore our new surroundings. Breakfast included waffles and chocolate sauce – very popular. Healthier options were available but somehow didn’t make it onto many boys’ plates.   It was a concert day and the venue was quite a way from the hotel. Blue bags were packed – not only do they hold our concert shoes but also our reading books. Tours are always a great time for catching up on reading lists and books you always wanted to read but never had the time – or alternatively to mindlessly stab at an iPad screen which we are allowed to do on long journeys.

The concert venue was also a museum which housed an exhibition on the environment. It was cleverly laid out with many interactive exhibits – in fact, they were pretty well all interactive. I’m not sure what the tall distorting mirrors were to do with global warming, but it was amusing and terrifying to see what the rather small Romeo looked like when magnified to 8 feet high. A popular exhibit illustrated how important it is to save water. There was an underground tunnel that you had to crawl down to access glass domed vision stations. It was a little like being a deep-sea diver from long ago – when the divers would have the heavy glass helmets bolted onto their suits. If you were the boy to peer out from the glass bubble you were rewarded by an onslaught of water jets controlled by those on the side of the water pool – but without getting wet. Mostly the people firing the jets were the ones that got wet – but don’t forget, don’t drink the water.

We also enjoyed pitting our strength against an exhibit showing how cycle power compares to car power. You were given 30 seconds to generate as much power as possible by cycling as hard as you could. Such is the competitive, but nice and friendly nature of certain boys, it soon turned into a wild contest to see who could cycle the fastest and in turn generate the most power – and wear out the bike. I do not demean myself with such frivolities. 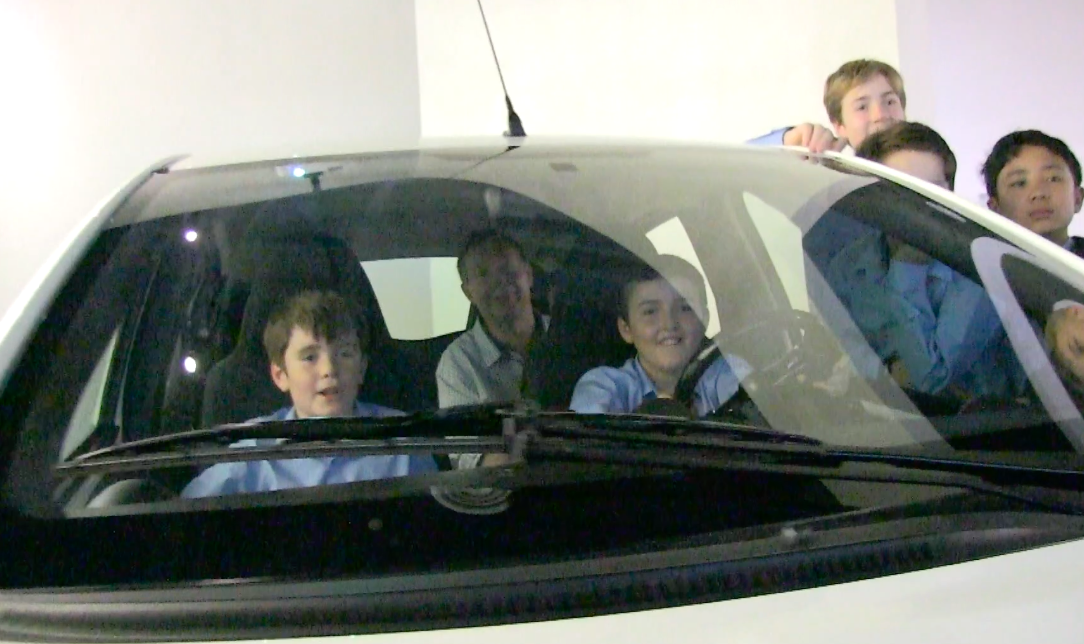 The most popular exhibit of all was a driving simulator which involved an actual car set in front of an enormous screen. The challenge was to drive across a simulated rush hour Shanghai to reach the Museum car park. Sounds simple but I can assure you that there won’t be any white robed Libera boys behind the wheel of a car for quite a few years to come. After all the fun it was time to return to the music. We had a sound check and ironed out any issues from the day before. We were almost back to our full contingent and were sounding good we thought. After a quick lunch we settled down into concert mode. We read our books and played our special brand of silent games – saving our voices before the concert.   The concert went well. It was a boisterous audience with quite a lot of families with young children. The children seemed to really enjoy the music and liked to show their appreciation by running around and even joining in with some of the Libera moves. One of them was trying to conduct us. Great fun was had by all.

Day six – another lie in, we could get used to this. Back to school after the trip and back to early morning starts – lie ins need to be savoured. No Sunday uniforms this morning, it was to be our white hooded sweatshirts and combat trousers for an informal, slightly cool, but tidy look.

We went outside to board the coach only to find that our regular mode of transport had been replaced by a fleet of shiny new spangly Volvos. They drew up to the grand hotel entrance in turn, and we swept out to our limos feeling very important. We were chauffeured around for the rest of the day in our beautiful, gleaming vehicles. First destination was a massive natural pier where we boarded a large sightseeing ship. It had a large open deck at the front where we congregated and enjoyed the sights of the city. The air was warm and the sky was clear affording us great views of the modern district of Shanghai. We enjoyed seeing the Orient Pearl Tower and the famous Shanghai Tower. 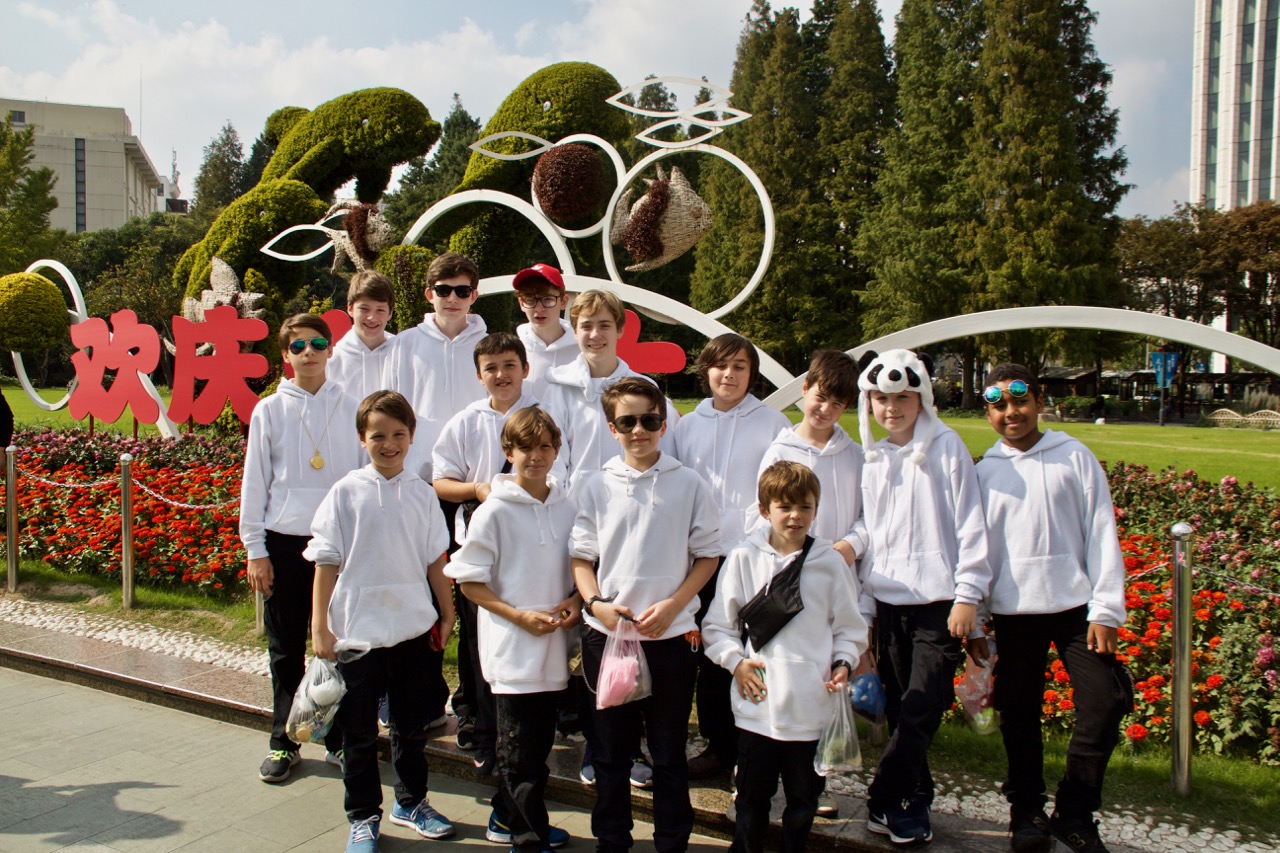 Once on dry land again we were met by our cars and transported to a stunning inner-city park. The park was not like the parks of South London; instead of horse chestnut trees, laurel bushes and dog poo, it featured bamboo and cat poo, this being because the park was inhabited by a million cats and kittens who did the usual cat stuff – purring and snuggling and looking cute – but were sadly homeless. 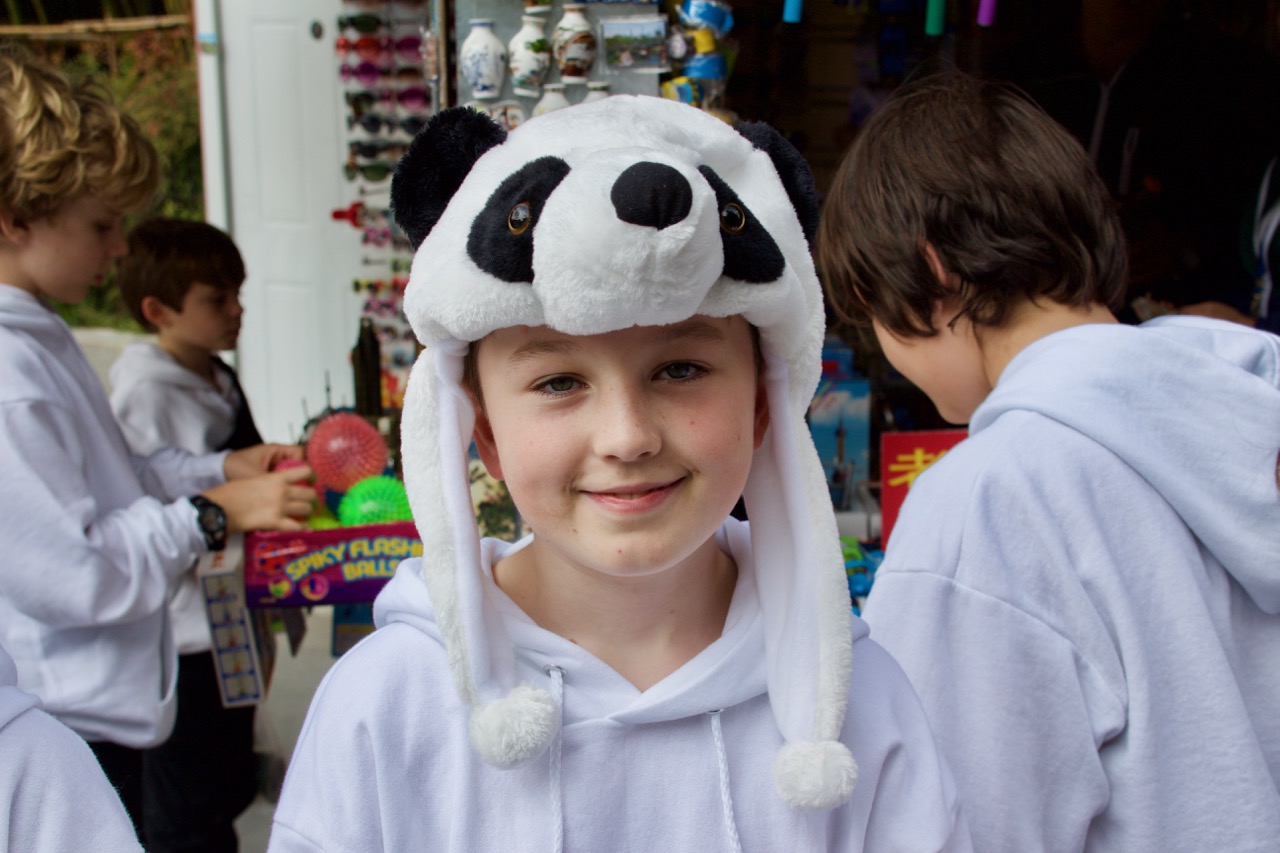 There were a number of stalls in the park which proved to be a good source of essential souvenirs including mini-Shanghai skylines and many panda-related products, starring a large panda head-dress which Joe wore for most of the week.

After a great morning we were taken back in the cars to the hotel where we changed to travel to the next concert venue which was another enormous exotic looking establishment. White robes chucked on, voices rested we were ready to sing. The concert went very well and the audience were extremely supportive. A great evening, we were feeling at home in China. We were still lucky to have the cars at our disposal and they took us on our final journey using them – destination dinner. We went to the Yasmine Steak House where burgers seemed to be the popular choice. It was a short journey back to the hotel but it had to be made by taxi as our luxurious cars had clocked off for the day. Snooze time. 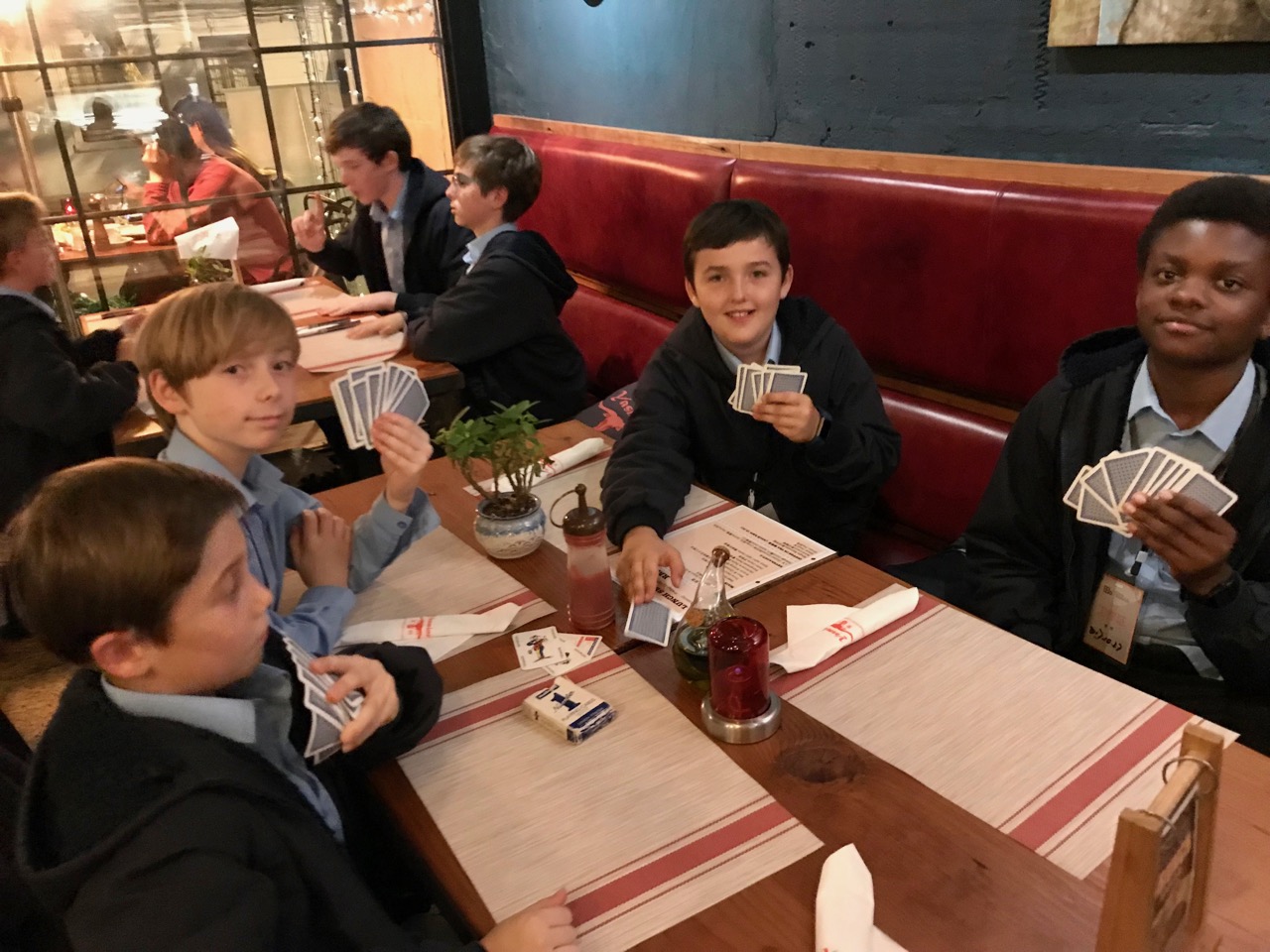 Yes indeed again! Well written British voice! Very Oxford! I like the line: “I do not demean myself with such frivolities.”

So lesson learned, do not eat at McDonalds in China.

Glad to see that those who went down with the bug made a fairly quick recovery and great to see also that the audiences for the concerts are appreciating the music. Enjoy the rest of the trip

Congratulations on your unified and creative efforts in the face of unexpected events.

It’s been three years since you’ve performed in Boston on April 1, 2015 at the Wilbur Theatre. Please return soon.

Meanwhile, best of everything to such a diverse, talented and dedicated group of the world’s best choristers.

Yes, I would certainly appreciate a return to the USA, preferably on the east coast in a venue, such as a church, that would be more economical than your last visit to Boston in 2015. Thank you for your consideration, and I will donate as funds allow. Don Carlson

It is amazing that any restaurant in China would have food that would sicken foreign visitors. They know that story would out. Looks like the boys had a great time with the exception of the illness – Poor kids.

China – Shanghai – so close to Korea, yet no visit. Two years absence, now. Has LIBERA forgotten how much Koreans like them and how disappointed they are?

Just curious: I’d love to hear Libera sing “Joy to the World” by the Three Dog Night….
“Joy to the World, all the boys and girls, Joy to the fishes in the deep blue sea…Joy to you and me!” (We used to sing this in elementary school at their age!)