We woke up on the hangover of the concert and left Fort Worth at 10:00 to go to St. Louis. I won’t go into much detail here, as it was mainly 14 hours of eating, endless rounds of Mario vs. Luigi, and some music and reading. We arrived in St. Louis at roughly midnight and went to bed instantly, for we were all really tired.

The next day, however, was a little bit more interesting! We got up fairly late, and then we spent the morning at the zoo. That was really fun. We went to the insect bit, where we saw this colony of ants trying to cut up leaves and bring them back to their homes. It’s amazing how clever and intuitive some creatures can be. Then we went to the butterfly sanctuary, where there were butterflies everywhere. It was especially cool in there because some of the butterflies were adventurous enough to land on unmapped soil, namely our hands. We also got to see a sea lion show, which was really cool. The sea lions had been trained to high-five, and jump through hoops, and the classic trick of balancing the ball on the tip of the nose. 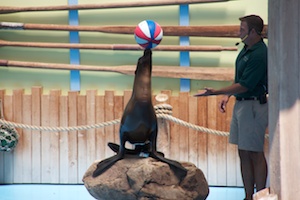 And we all thought that sea lions would feel smooth and slippery, but in fact they have short hairs, and so the feel like a straw-haired dog. That was really fun! We spent the rest of the day at the arch that towers over the dock by the Mississippi (I spelt it right!). It was amazing at first glance – we were all surprised by how 2-D it looked from the front, and we all wondered how on earth we would get to the viewing compartment at the top. Of course, we all expected there to be a lift. But, much to our surprise, there was no lift. Not even a long flight of stairs. Not even an escalator. Instead, there were eight tiny and terrifyingly flimsy pods that were supposed to contain five people at a time. 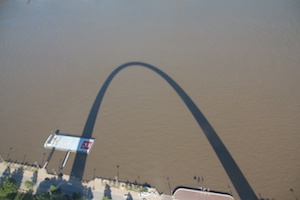 Getting to the top was so scary, as the pods kept on shaking about, and it felt like we were going to drop to our deaths any minute! It was really fun. The view from the top was spectacular, as there was the shadow of the arch looming across the landscape on either side, and we felt as if we were the eyes of a God. Getting to the ground again wasn’t as scary as getting up to the top. It was a lot faster, and therefore lots quicker. When we got to the bottom, we went to the museum that was under the arch. That was quite interesting, because it had tepees, and a lot of things about native American culture, as well as the industrial revolution. It also had some information as to how the arch was built. It’s quite scary to think that builders were just situated on top of it while it was being made! 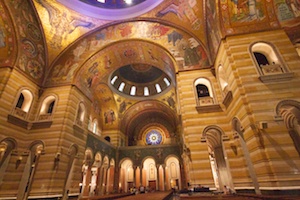 The day after our excursion to the arch, we performed at the basilica of St. Louis.Wow. What a venue! The basilica was huge, and as most of you know it’s famous for its 8-second echo. For us, this echo had a lot of advantages; we could play with the sound and the blend of the different vocal parts. To give an even more detailed example, the older boys, who have really powerful low voices, could end phrases earlier than the floaty trebles, because the sound of the lower people carries on with the echo, but blends much better as a result, rather than belting it out for as long as the more subtle parts. We also used the higher balconies for Stefan and Ralph’s “aah” parts in Mysterium at the opening of the second half. That was really clever because Ralph was on one side and Stephan was on the other, so there was an illusion that Libera was all around the audience, not just on the stage! Anyway, the feedback from the fans at the signing after the concert was very good, and after a hard day’s work I’m glad we were able to impress the fans.

The day after the concert we left for Nashville, Tennessee, the home of country music. It was really cool. We went down a typical street in Nashville the day after we arrived. There were so many music shops! And we saw a Hard Rock Café, and everyone knows how cool those places are. We also went to a hands-on science place, which was pretty awesome. There was this star walk, where inside it was pitch black, apart from stars above, around and underneath us. The platform we were walking on was transparent, so it felt like we were walking on thin air. There seemed to be no bottom to this maze, which made it all the more terrifying! The route round was twisty, and in the dark it was really confusing. And the screams from the scared people all around didn’t help much! It was so much fun.

Obviously, in public places, when we’re all dressed the same, it’s no surprise that people come up to talk to us and ask why we’re in uniform. But what did surprise me was how polite these people were. They were really nice, and everyone we have met on this tour so far has always been so welcoming. After this science trip, we went to this really cool bouncy castle place, where there were inflatable rock-climbing walls with slides on the other side, towers where to climb to the top we needed to climb up through endless webs of elastic straps! There was also an arena with lots of objects to throw and ridiculously oversized boxing gloves. Don’t worry, they were soft gloves – no bruises! It was really fun, and everyone was exhausted by the end of the day. That was a good thing, because we could crash out straight away, as we had a long day ahead of us.

On Sunday, we performed at the Brentwood United Methodist Church four times – in all 3 masses in the morning, and obviously the concert in the evening. The middle mass was really cool, because it was musically oriented, so there was a band with an electric bass, an electric acoustic guitar, two keyboards, three main singers, and a drummer who was whacking those cymbals and crash drums with all his strength. It was pretty cool. Between masses, I wrote the first part of this blog. We performed “Sanctus” and “How Can I Keep From Singing” at each of the masses, like a taster or a demo version of the concert. I noticed in the concert a few faces from the masses in the morning, which was good because we caught the gaze of a few more people on our way around the states. The concert in the evening went really really well, according to our fans. Once again, we were glad that they enjoyed the concert.

At the time of writing we are on the coach to Atlanta, so we are now leaving Tennessee sadly, and we are preparing for our first time change since our arrival in Fort Worth, although it is only an hour.

How would it be possible to be notified when Libera comes to Texas again? Maybe even San Antonio? I’ve just discovered them on http://www.GodVine.com and their video of Amazing Grace brought tears to my eyes. I would love to see them in concert!