We’ve travelled far and wide: from Canada to Japan, Korea to Ireland, America to the Philippines and even London to the Channel Islands. But today we turn a new chapter in the Libera world travel book, and set foot in a place we do not know anything of.

It’s really interesting to visit new places for the first time. Not only have you got a totally different culture, but also you’ve got new places to go, new people to see and new venues to sing at. We set off on our flight after a coach journey to the airport, and went through security, all that jazz.

After the 11-hour flight, we touched down in Hong Kong to queue up for our next flight to Taiwan. We were getting pretty excited now, but everyone was really sleepy and confused. When we descended into Taiwan, during another earache of the pressure change, things started to really get going.

A few custom and immigration checks later, we met up with our host.   He led us to our coach: which would take us on our way to our first hotel. It looked shiny, and we got a to see our first view of the streets of Taipei. It was around 8, and we were all pretty hungry seeing as nobody ate any plane food. Don’t blame us, it was really quite disgusting.

The sight of our first hotel restaurant greeted us like an oasis in a desert. We quickly scoffed our dinner and were off straight to sleep. Everyone slept like a log, until they were greeted with the sunshine that would start our first day of really experiencing Taiwan. 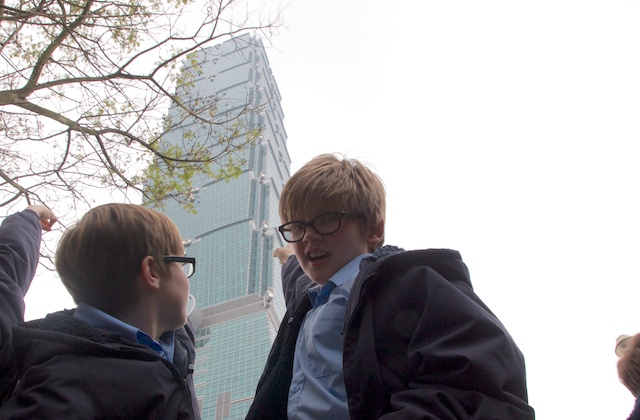 In between all the concerts, rehearsals and professional stuff we do, as always there is time for us to muck around and see stuff we would never see back in England. An obvious hit was the Taipei 101. The second tallest building in the world, but we weren’t going to dubai any time soon. Even though it was an overcast day, that didn’t stop the twenty-six of us (and our chaperones) admiring the vast construction and architecture.

We went up at first, all the way to the first deck. The view was, as you may have guessed, cloudy; but we could still admire the 360 view of the city we’d be spending some time in.

After that, we went to take a look at the in-genius design of the pendulum, or wind-damper.  The stairs then took us to the outside level, so near the top we were actually inside a cloud. It was weird to breath in the air that was so high up. After a short queue and 43 seconds later, we found ourselves back on the ground

That was just one of the things we did. There was an interesting talk about the History of Taiwan by our host In the Regent Hotel, Taipei. We ate amazing food. We even went to sleep a few times.

Stay tuned for some more inside scoop on Taiwan.

Thanks for your blog boys. It’s always great to hear from you about your experiences and view of the tour from ‘your’ side. It seems that you have really been wowing your audiences – especially with your prowess in speaking the language and your singing of The Moon Represents My Heart. No surprise!:) I’m not sure that I would make it to the top of Taipei 101! The view must have been fantastic through the cloud! lol! look forward to hearing more. God Bless 🙂

Hope you guys enjoyed your stay in Taiwan.
Thank you Libera for making this year an unforgetable and meaningful one for me and many others. Please do visit Taiwan again real soon.

Excitedly looking forward to your more news from your Taiwan tour ! Suppose that the boys had experienced kinda new joy there 🙂

Thank you, Libera, for coming to Taiwan and giving us 5 wonderful concerts! I’ve been waiting for you to come here for so many years. Needless to say, all your fans in Taiwan were very excited when your spring 2013 tour was announced at the end of last year. I went to the second concert in Taipei and really enjoyed it. It was a pity that the time for poster signing was so short and since no picture taking was allowed, I couldn’t talk to you guys to express my deepest thank to you personally. During the past years, whenever I felt frustrated or depressed, your songs were the best comfort for me. I hope all of you enjoyed your time in Taiwan, and hope we’ll see you again very soon in the near future. May God bless all of you!

Thank you, Libera, for coming to Taiwan, and giving us five great concerts! Hope you all enjoyed your time here.

Really appreciated your great concerts in Taiwan. Hope to see you soon back again!

ha ha “really quite disgusting” lol
still thank you for bringing us unforgettable memories. and I’m really happy to know you have a good time in Taiwan!