We awoke in Houston in our luxury palace which we were able to enjoy because Libera is supported by Four Seasons Hotels. We soon realised we had been spoilt by the sunshine in California.  Looking out of the window we could see the city of Houston stretch out before us.  It was raining but very warm and humid.  We were in rooms of three, which was fun – but the rooms were VAST, ENORMOUS. 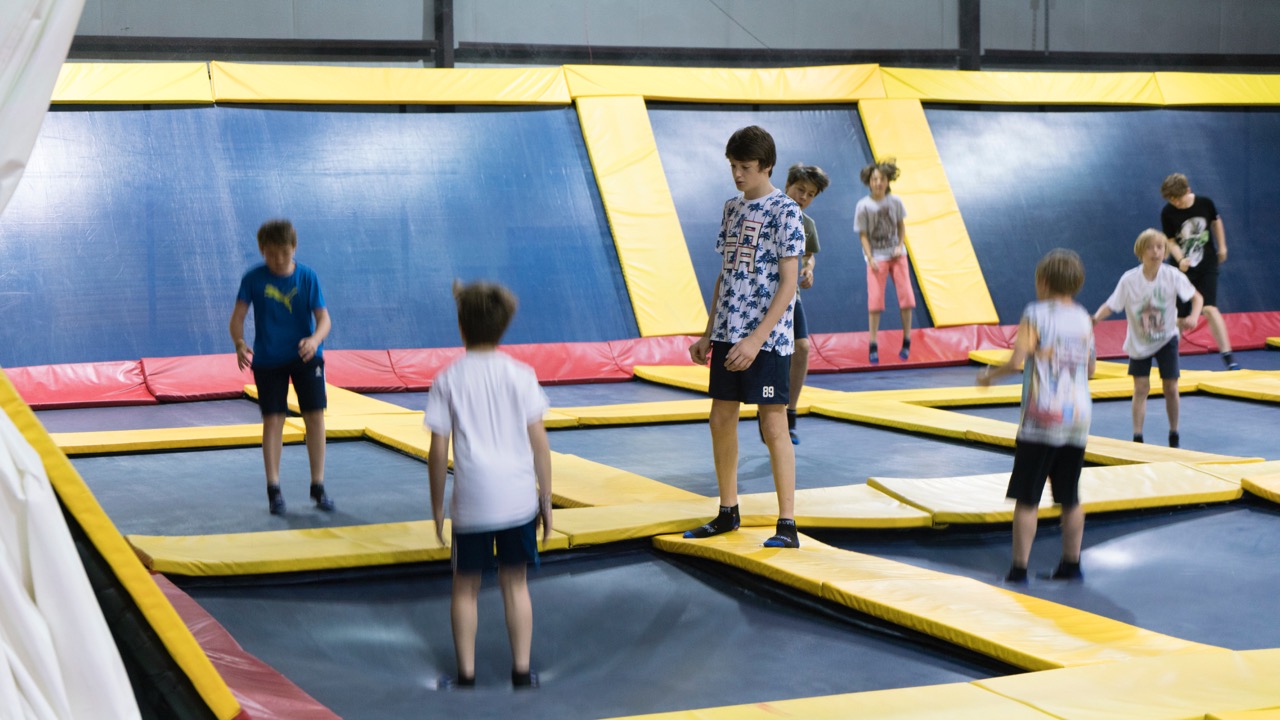 We travelled by coach to a huge trampoline park just outside of the city.  It was a vast complex filled with trampolines, obstacle course, dodgeball courts and arcade machines.  I think a lot pent up energy was spent and great fun was had by all. Activities like this are always great – it is like having a playdate with twenty-five of your friends. 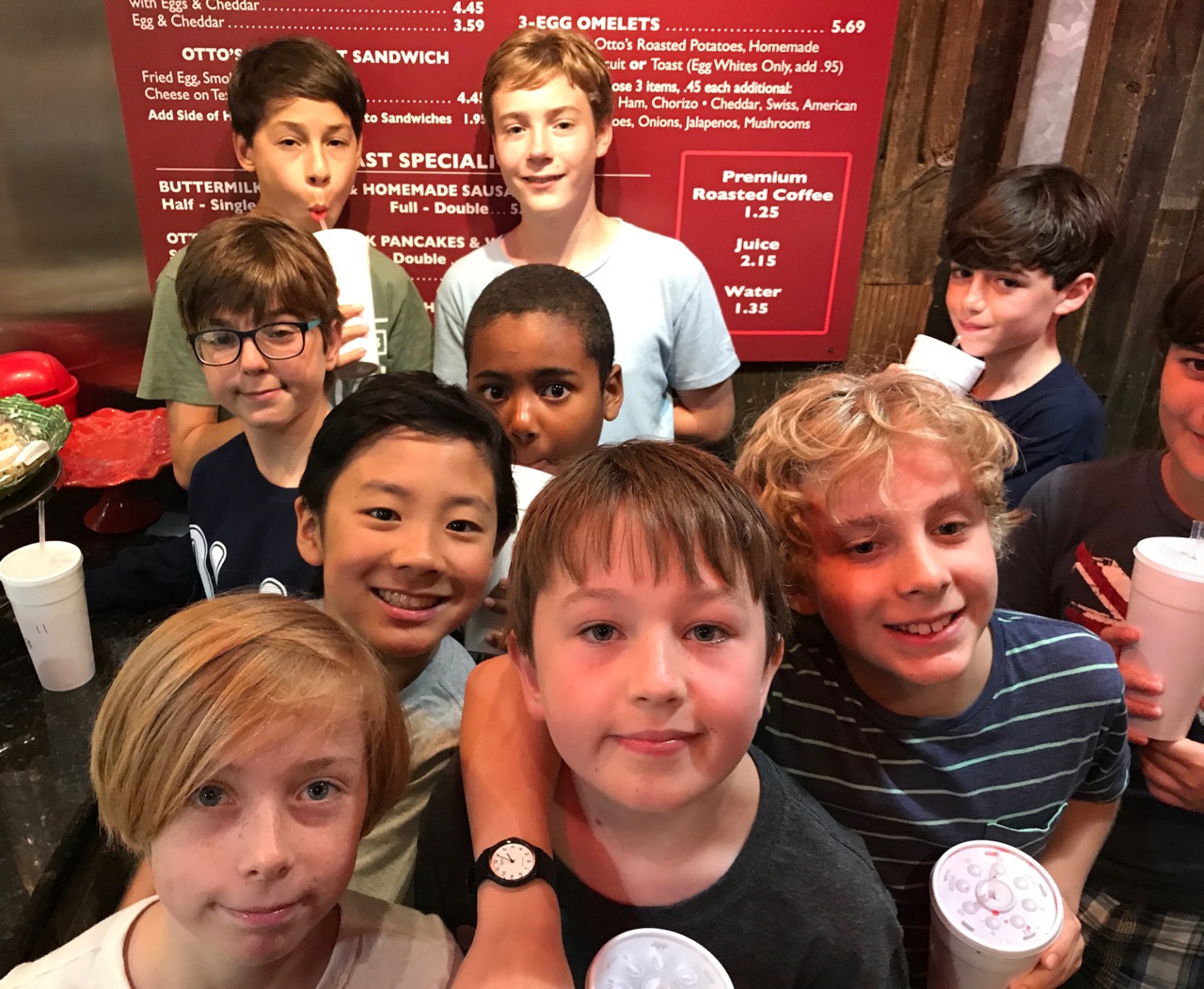 There is a great camaraderie between the boys despite the age differences. Obviously all the activity of the morning had helped us build quite an appetite so we made our way to Wendy’s for burgers.  This came as a revelation to most boys as the burgers were actually square rather than the round ones we were used to. On the way we experienced some serious Rain – wow – enormous globules of water poured down! 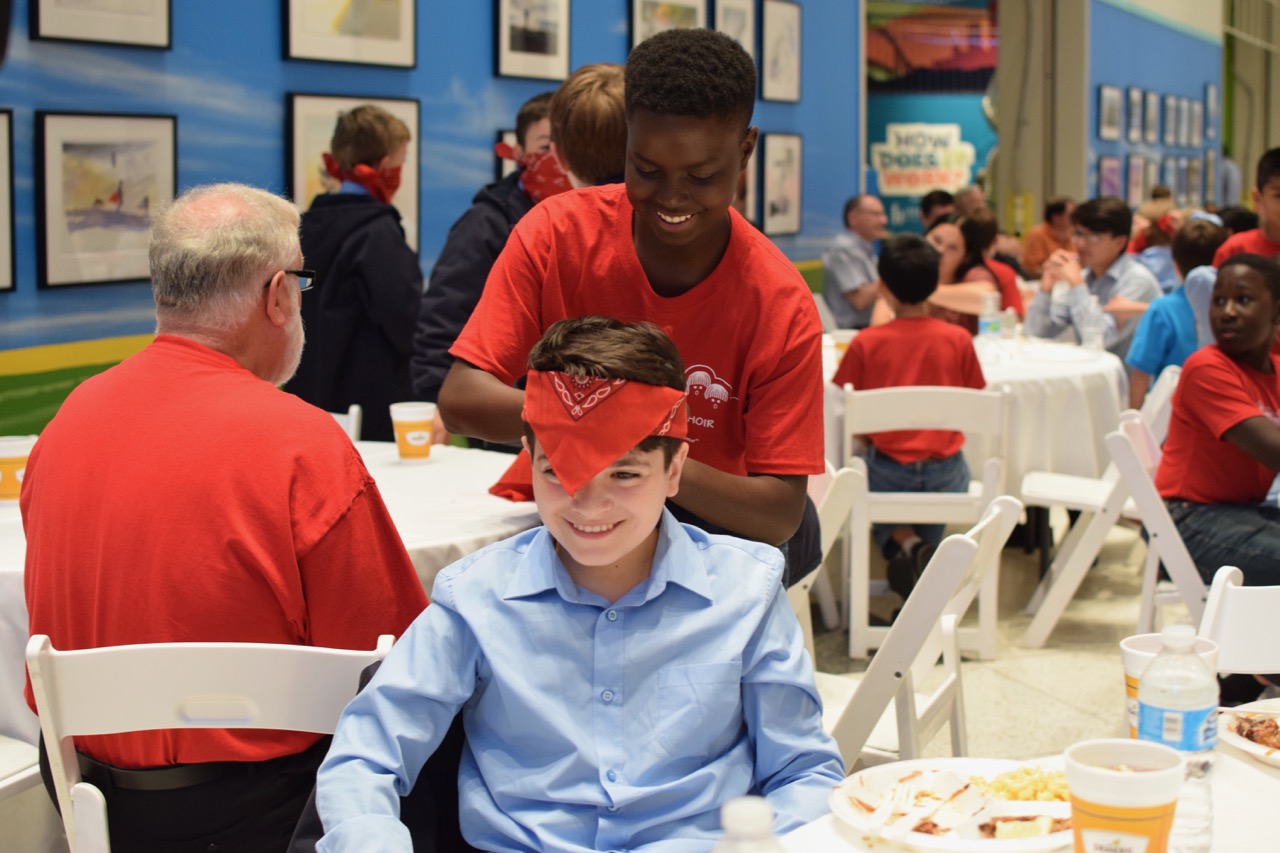 The afternoon promised to be fun. We were meeting the boys from the Fort Bend Boys Choir at the Houston Children’s Museum which stayed open especially for us.  The building was very unusual and looked like something from a Roald Dahl story book. It had huge yellow pillars on the outside and when we went in was bright and colourful.  We spent time chatting with the Fort Bend boys, they had just returned from a tour of Europe so it was great to hear what they had to say. 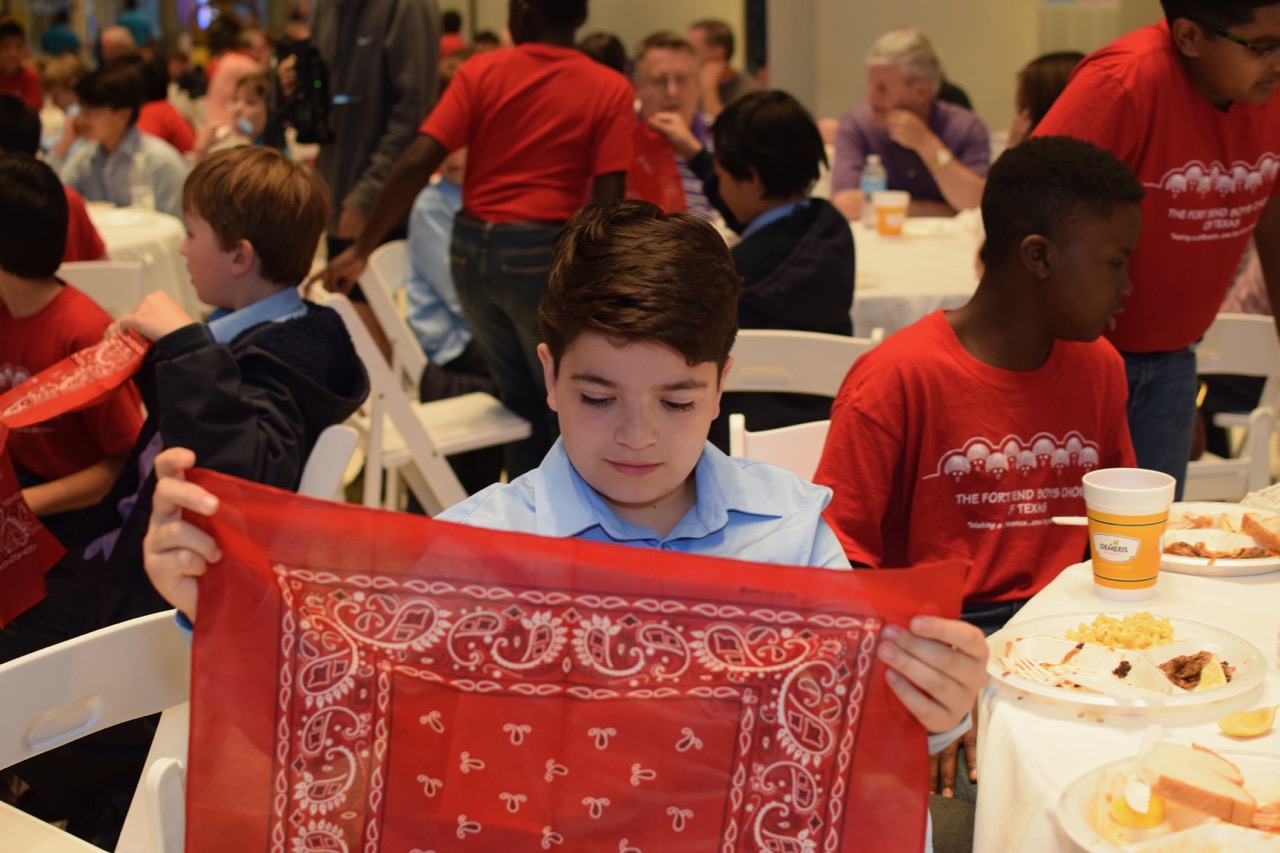 They were very friendly and it was lovely to spend some time with them. We sat at the dining tables – two Libera boys and two Fort Bend boys to a table and then Libera supporters joined us too.  It was super to see some very familiar faces amongst those dining with us and also lovely to meet with local supporters.  We spoke about many singing related matters and also the difference in language – for example crisp vs chips, biscuit vs scone and I won’t mention trousers vs pants!  We had a delicious meal of roast turkey or beef with all the trimmings, including Texan barbecue beans – yum. 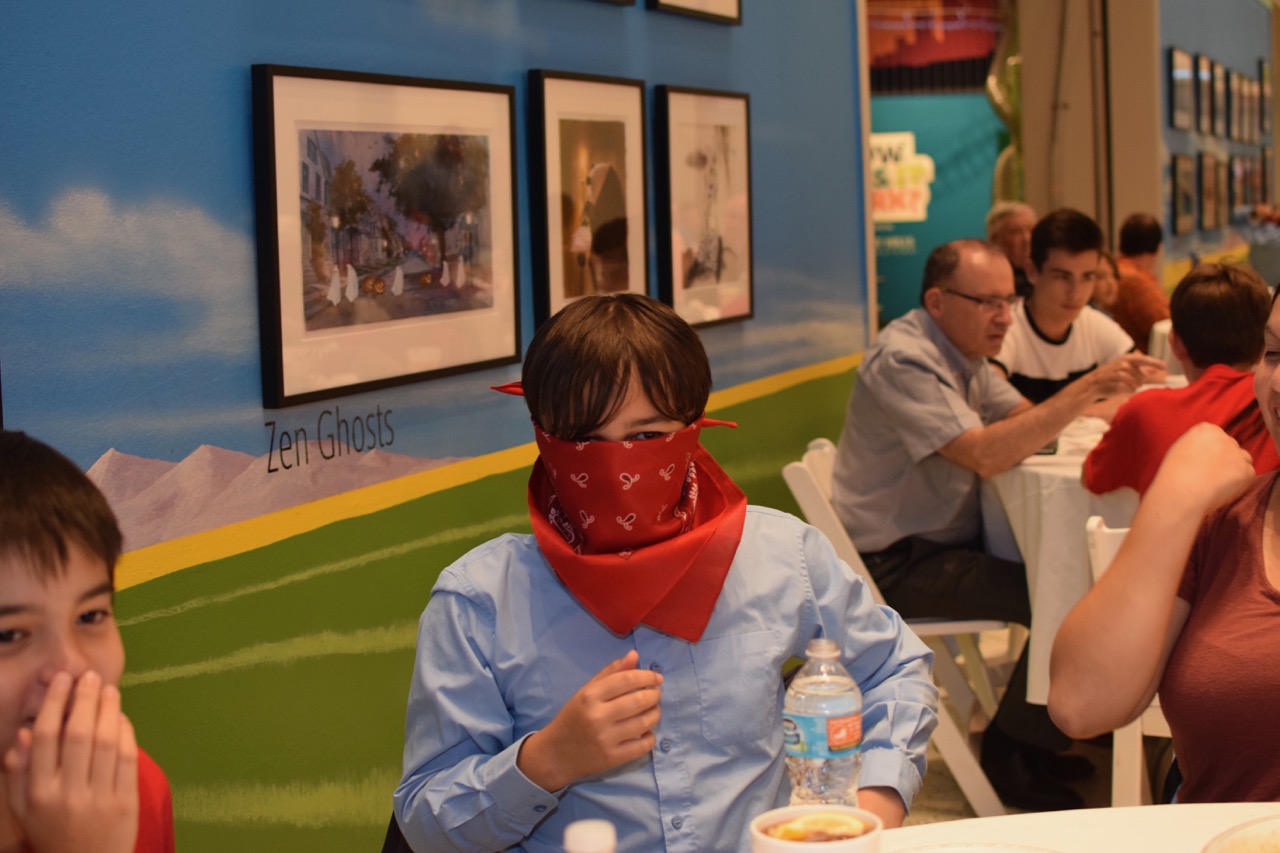 After our meal we had some time together. The Fort Bend boys had bought us all bandanas. This presented an interesting situation because most of us have never worn bandanas before, and didn’t know what to do with them – so we tried out various options as we pottered around the museum. The museum was amazing, it had everything from ‘build your own element’ to generating electricity by peddling a bicycle but the highlight was the ‘Kidtropolis’ – a city built for children. We enacted a few typical adult world scenes involving shops, post office, cash machines, bank raids and police chases. Oliver kept getting booked for speeding. Romeo stole some dogs and cats from the vets, and was arrested by Merlin. Peter made off with a chicken. After an exciting hour, it was sad to say goodbye to the kind and friendly people we had spent the afternoon with but we boarded the coach and made our way back into Houston.  Next day was concert day. 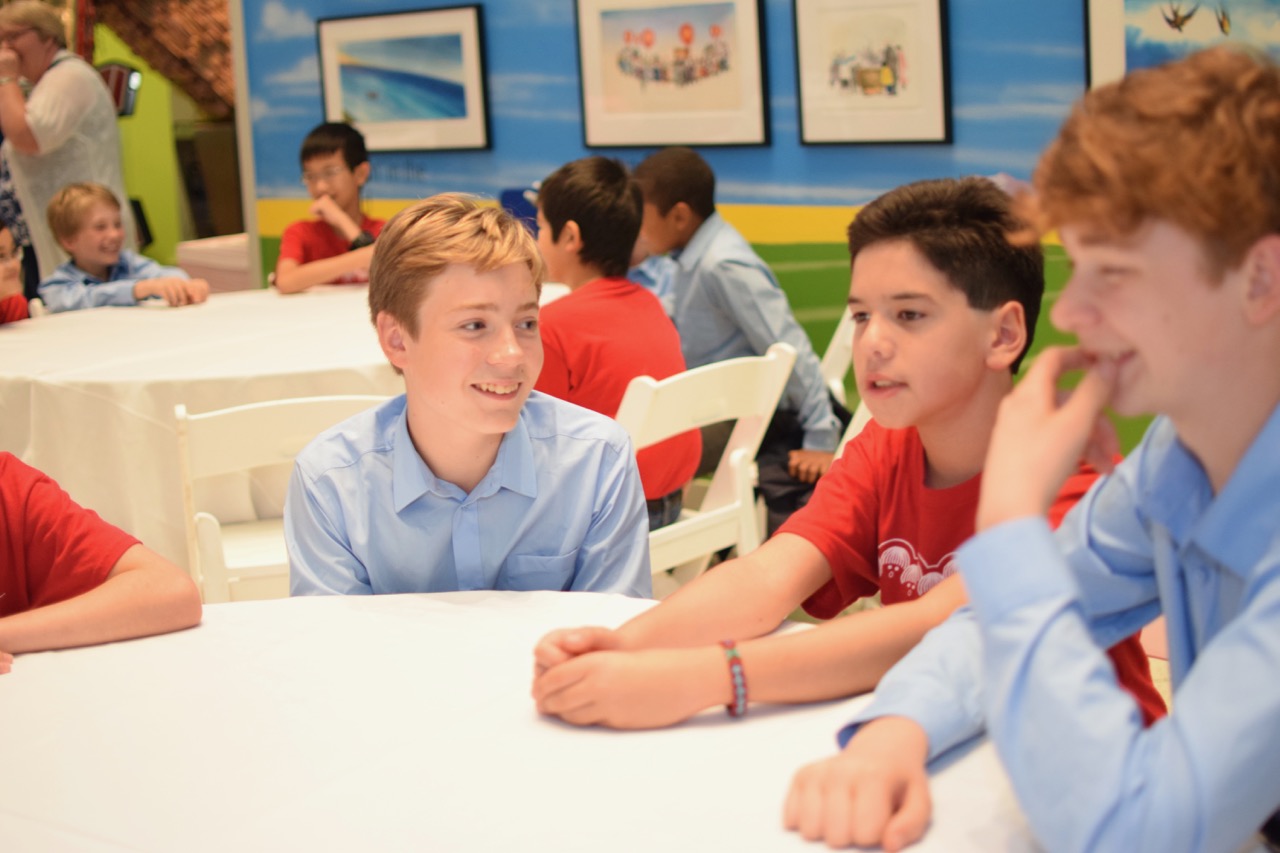 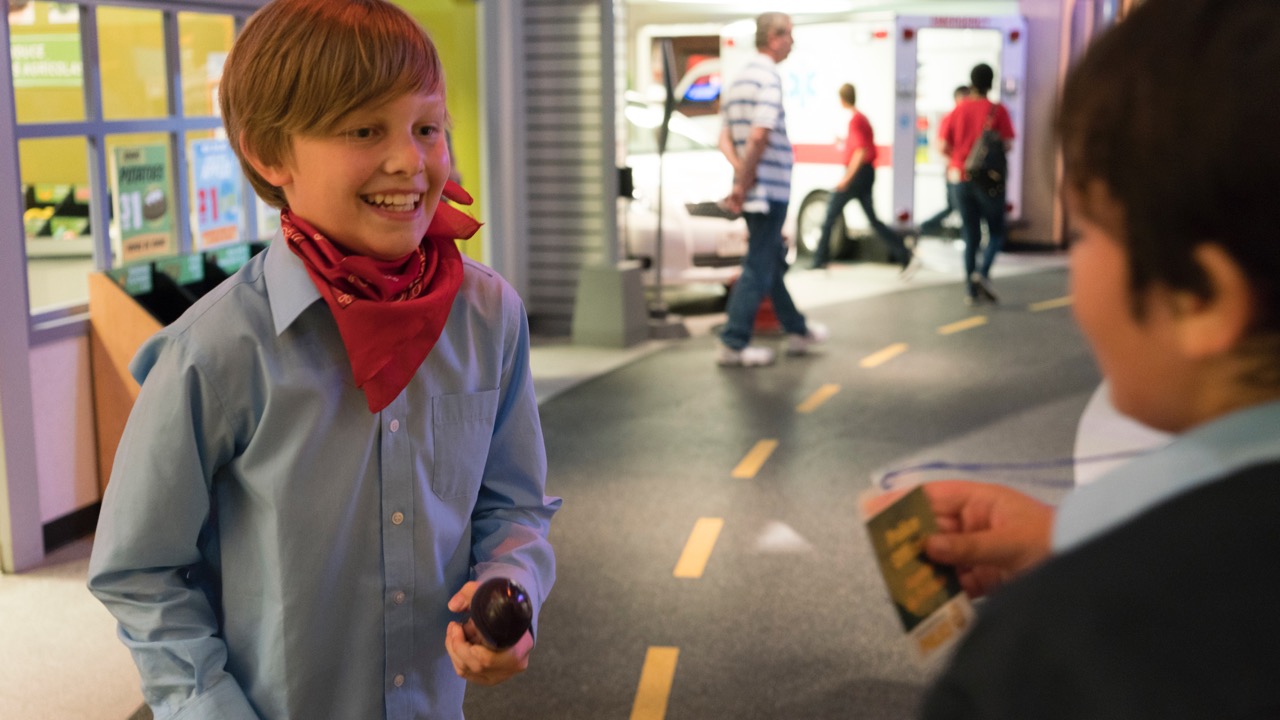 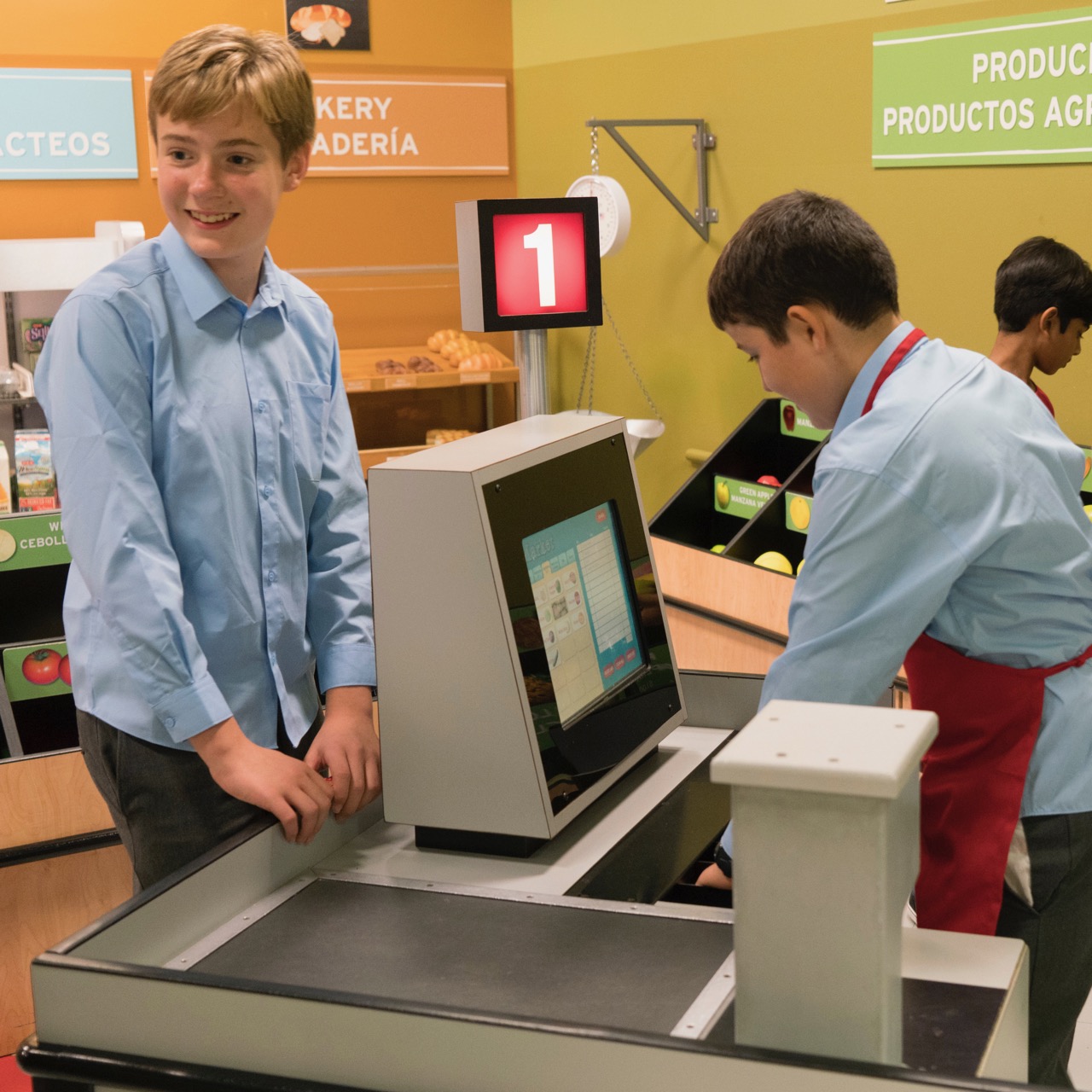 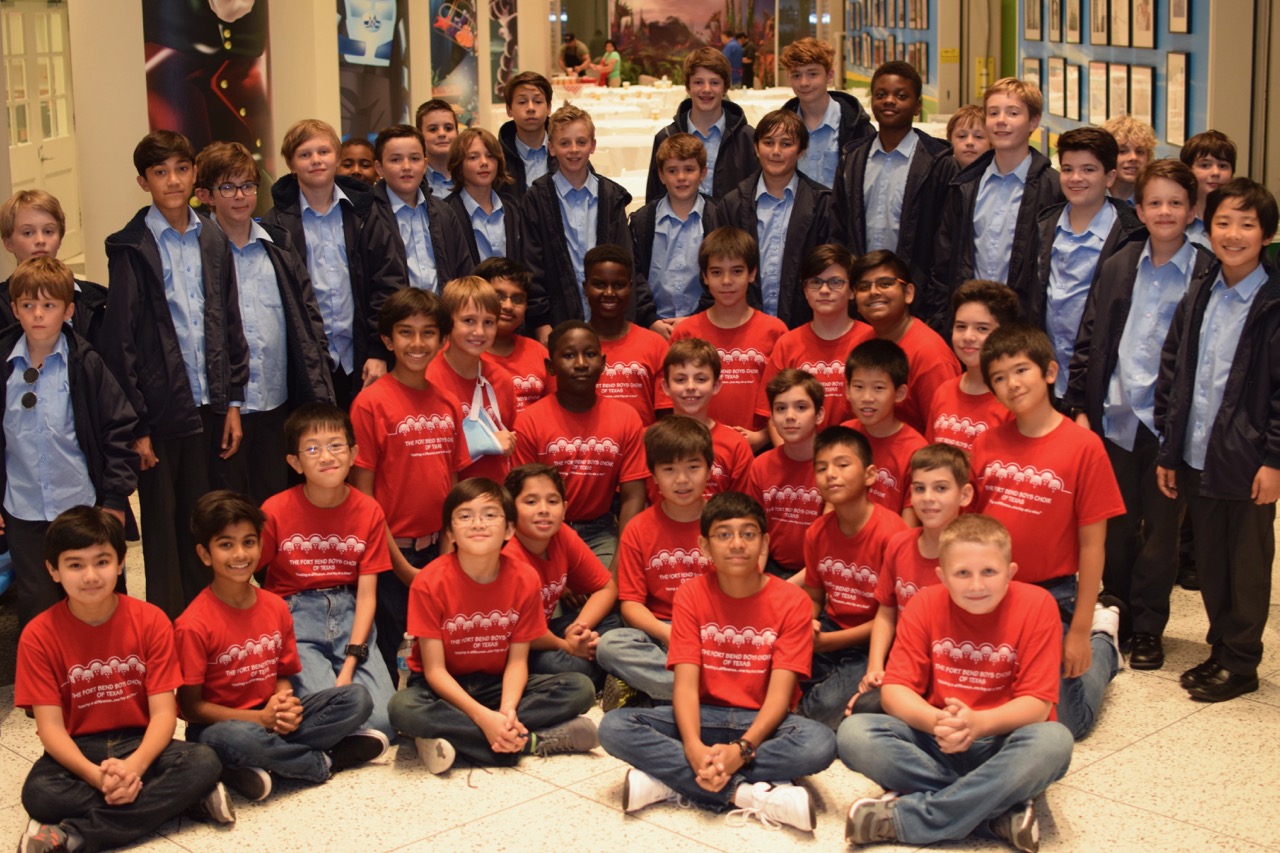 The morning dawned. Outside the weather was hot, hot, hot and the sun had come out for us. The morning passed quickly and soon it was time to leave for the concert venue.  We had the usual sound checks and it was great to see the lighting.  We are extremely lucky with all the hard work that goes on behind the scenes.  We actually have the easy job – we roll up, put our robes on and sing. 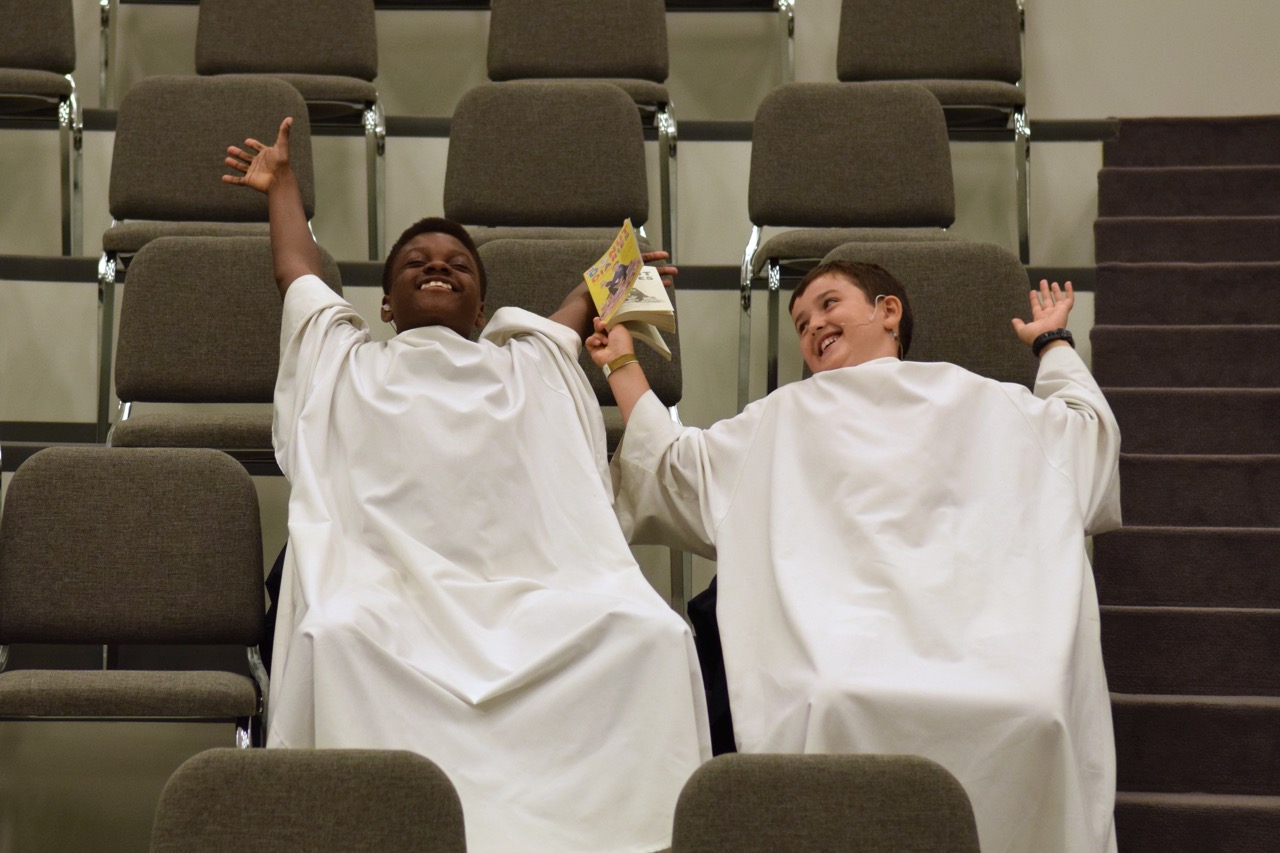 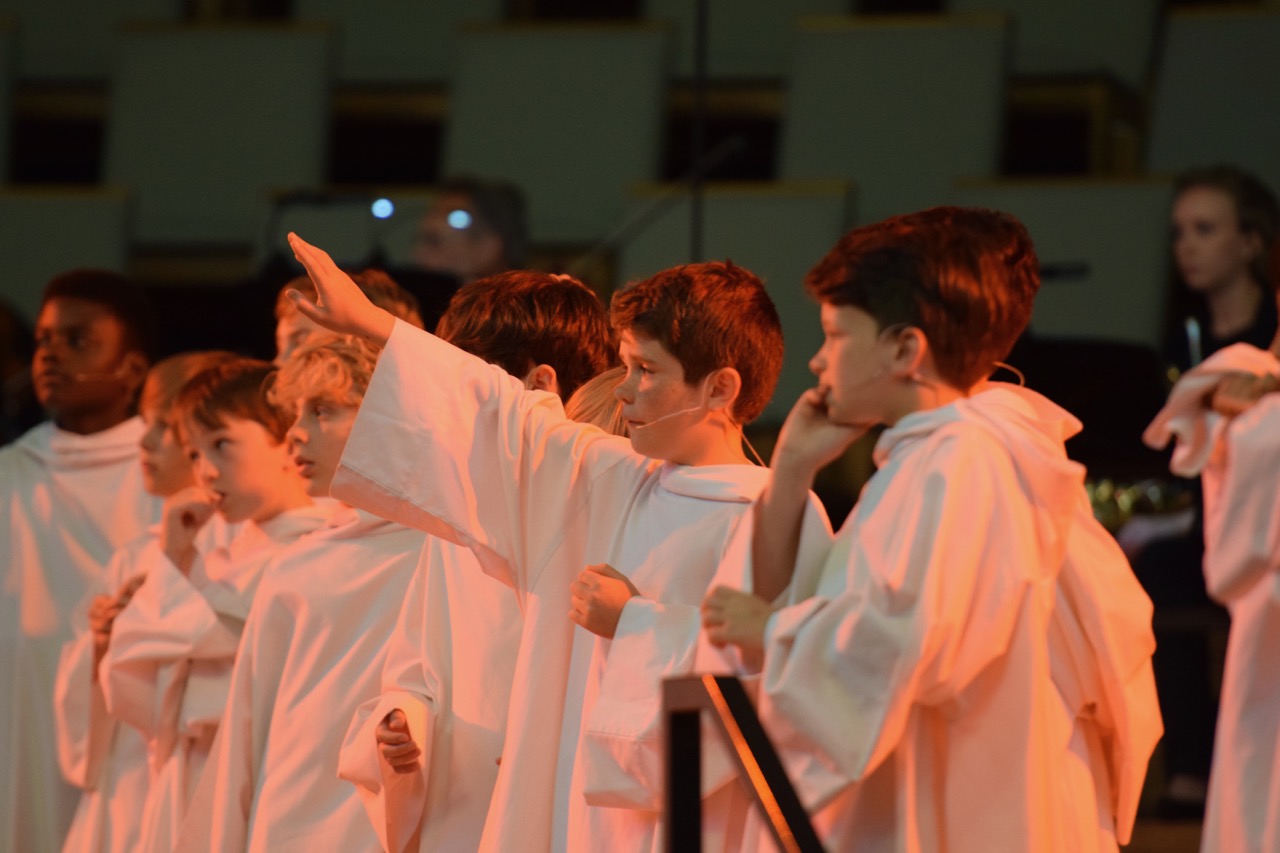 The robes are always ready, the lights are always spectacular and the sound quality always superb.  It makes me feel extremely lucky to be part of such a strong and slick team.  The concert was to be held at the Tallowood Baptist Church, a short way from our hotel.  The audience was large and so friendly and warm, it was a pleasure to sing.  After the concert we had a meet and greet and included in our new Libera souvenirs were Libera Hoodies which are a bit like the ones we wear, but with our logo on. 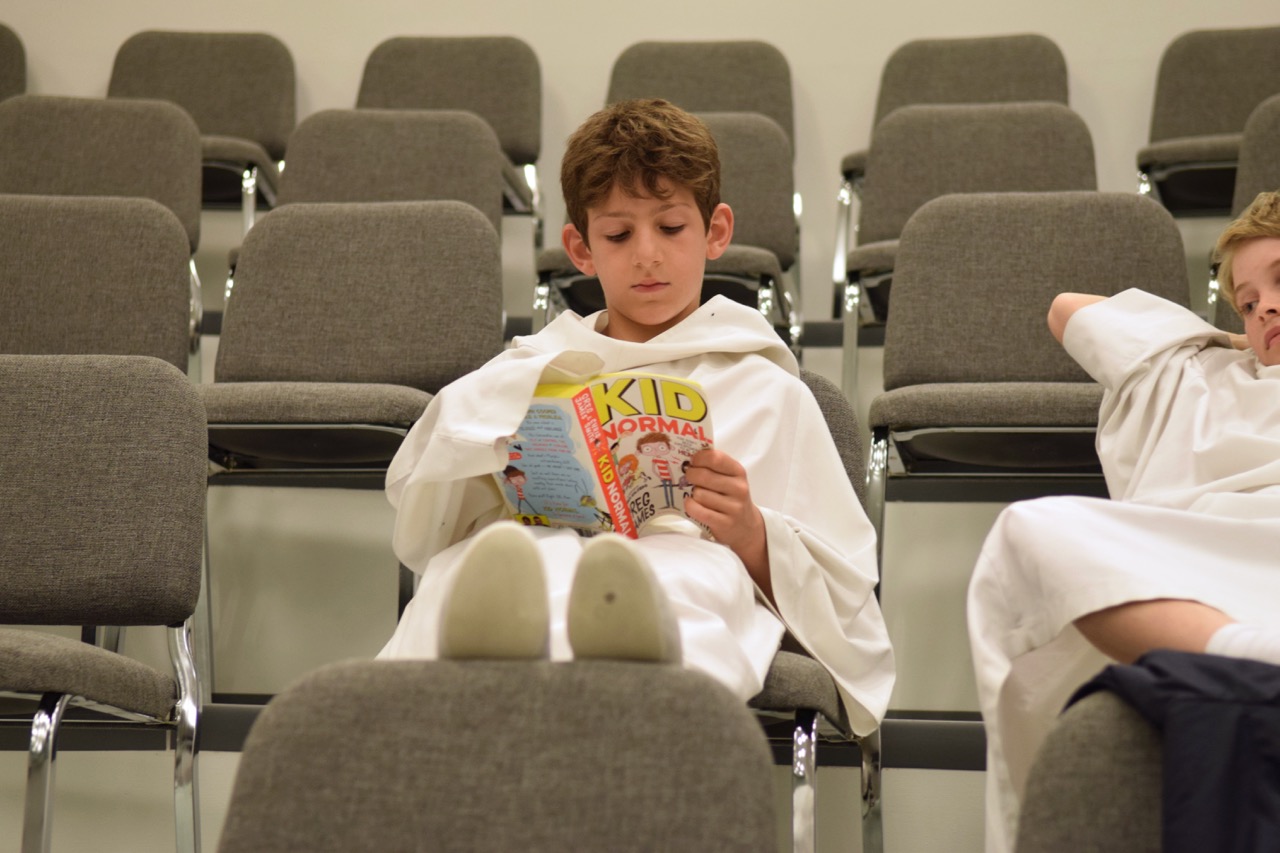 We returned to the hotel tired but satisfied by our performance.  We slept knowing that, to quote Gene Pitney, we were only ’24 hours from Tulsa’! But that’s tomorrow, and tomorrow is another day – and another Part. 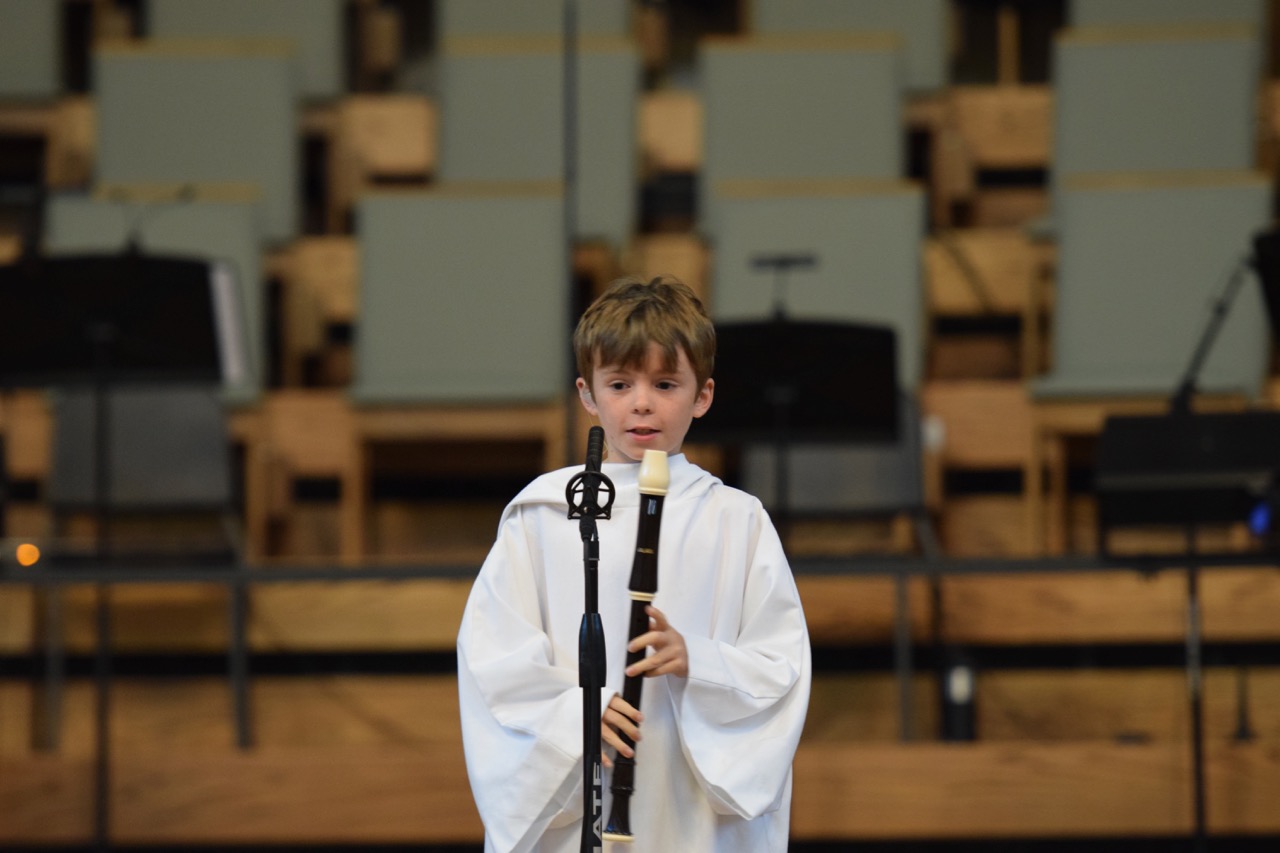 Hi I love the Music

Just bought my second Libera CD – Libera Eternal. Played it in my computer and my office mates loved it. I play it every day and it gives me a calming. The music just drives my stress away.

I hope the new hoodies will be available online soon, they look fantastic. I’m so happy you had a wonderful time in Houston even with the heat, it gets very humid this time of year. Even though I couldn’t make it there, I’m so happy that you were a joy to so many people at the church. Thank you for continuing to fill our lives with happiness.

I wish I had been able to be at the Houston Children’s Museum. I would have been able to show you how to wear the bandanas. I’m glad you had a great time. The concert the next night was excellent.
Tomm, Toronto

Next time I am in South London, I will be sure to stay clear of Oliver once he receives his driver’s license! 🤣😂

Greggor, is that his name? If I am correct, is he the one that looks like Shirley Jones could be his grandmother?

The Tesei brothers look like Freddie Highmore from the Willy Wonka remake with Johnny Depp.

I thoroughly enjoyed your concert in Houston and I’m looking forward to attending as many of your concerts as possible. I know what you mean about the hot humid weather in Houston. I hate it. Just be glad you are not in Houston now. Hurricane Harvey may go down as the most destructive in history. Not just from the wind and tornado damage but for the worst flooding I’ve ever seen in my lifetime. Right now Houston is crippled. Airports closed and transportation is at a standstill due to flooded roads deep enough to cover a semi-truck. The hurricane has been downgraded to a tropical storm that is moving very very slow and is currently bombarding Houston with torrential rain.
I hope everyone made it back home safely and I wish you all a great year.
~God Bless~

Our thoughts and prayers with you. The human spirit prevails during this hectic time. Peace be with you and, yes, I am glad the boys made it before Harvey hit. If possible liste to their music right now while dealing with this disaster for it is like praying-calm, soothing, healing and HOPEFUL. I hope you have some electricity to do this listening.

To get Viking Sea and Four Seasons as backers to the US tour is remarkable.

All our boys are enjoying reading your blog posts and especially have enjoyed this one, since they were there with you! We are having unprecedented flooding right now throughout the city and many of our boys have their homes under water! School has been cancelled for at least a week! Heard you all had some wild weather in Tulsa too! So many of the boys loved your concert too . . . we loved being with you all and getting to know you!

We enjoyed being with all y’all too. We are seeing the flooding and damage on the news bulletins and you are very much in our thoughts. Take care guys!

I enjoy reading all of your blog post (and by all of I mean it literally), but this very part is particularly joyful to read, especially the bandanas & ‘Kidtropolis’!! It’s nice to see you guys meeting with another boys choir, I’m sure all the members of the 2 had loads of fun!! I laughed out loud when I saw Mathias book’s title (KID-normal), and that picture of cute little Romeo with his recorder made me smile.

Who does these blogs? You are an excellent writer and very entertaining. My first ever Libera concert was this Tallowood Baptist in Houston, TX you just described. All the Libera boys were magnificent. The best performance of the night was Alex Gula in Wayfaring Stranger. Alex has a velvety smooth flawless voice full of emotion. His voice has matured into a spectacular instrument he has under complete control. Alex Gula’s live performance is 100% better than the CD version. Other fabulous soloists included: Rocco, Gabriel, Camden, Merlin, and Alessandro. Taichi and Leo did some great descants. They did a meet and greet after the concert. Libera boys are delightful young men. They are all so well mannered, good natured, polite and friendly. I hope someone recorded one of your America 2017 concerts on Dvd so I can buy it and watch it again and again. Thank you boys for sharing you great talent! God bless Libera and Robert Prizeman.

I think I figured it out. Gregor is the blogger!

Glad you had a great time in Houston! It is such a relief you left before Harvey arrived!