Day seven started around 08:30hrs when we rose, showered, dressed in our Sunday best and breakfasted. It was the final concert day. We reach a time when we are on tour when it seems as though it could continue for ever. Tour life becomes a routine and it seems very strange that it is only a week away from normality and that it would be back to school and homework before we knew it. We boarded the coach – back to slumming it, no chauffeurs today!  Our destination was an Art and Cultural exchange meeting with a Chinese choir from a local school. When we arrived we couldn’t believe the size of the school – it was sprawling and quite huge. The choir was enormous in number too and was made up of both boys and girls ranging in ages from around 6 to about 12 years old.

Many of them could speak English which was extremely impressive considering our Mandarin skills are limited to 2 verses and a chorus of ‘The Moon Represents My Heart’ – the song we sing in Chinese.

A number of tables had been set up in one of the school’s halls. At each table a group of children taught us new skills such as Chinese calligraphy, Chinese tassel making, a tea ceremony and making pandas from modelling clay. It was quite fascinating and the children were extremely talented. We left with many mini-pandas and assorted craftwork. 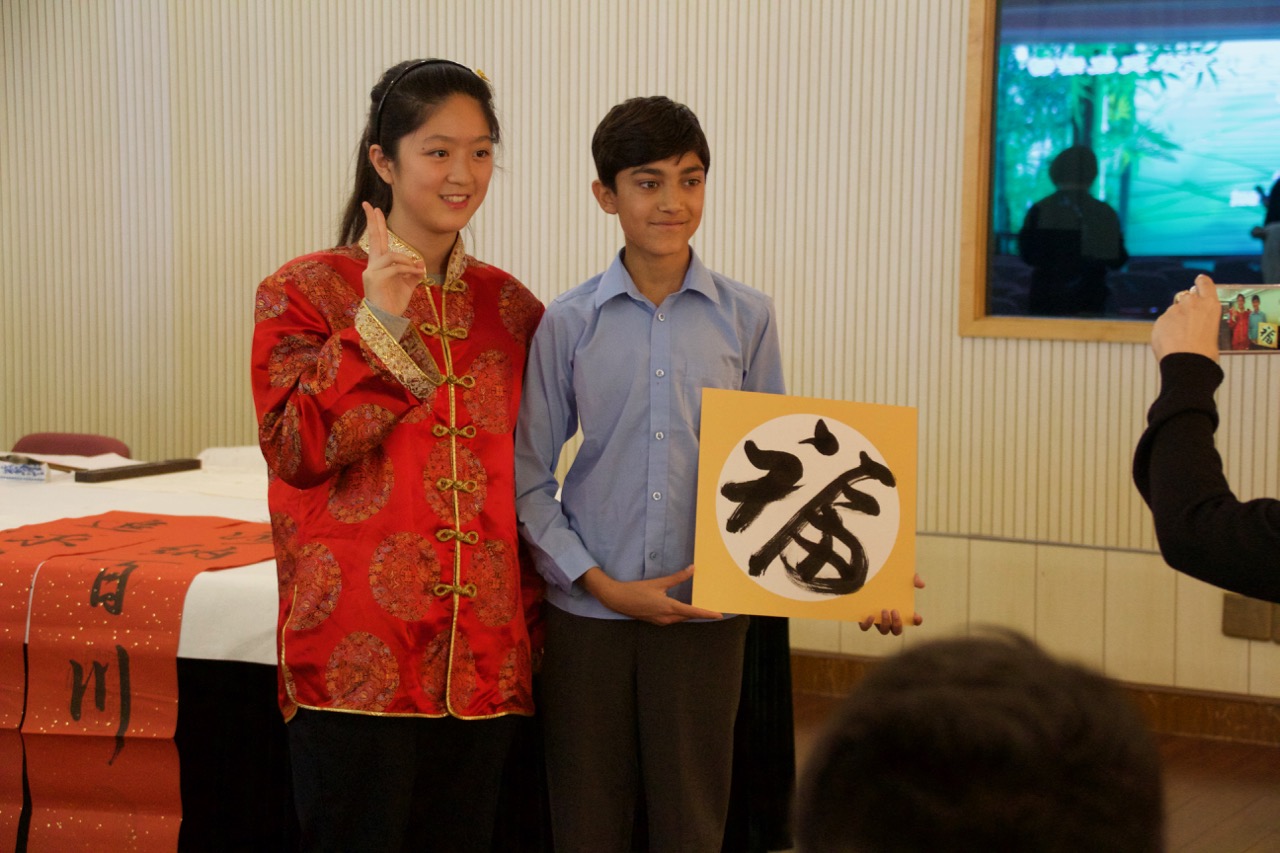 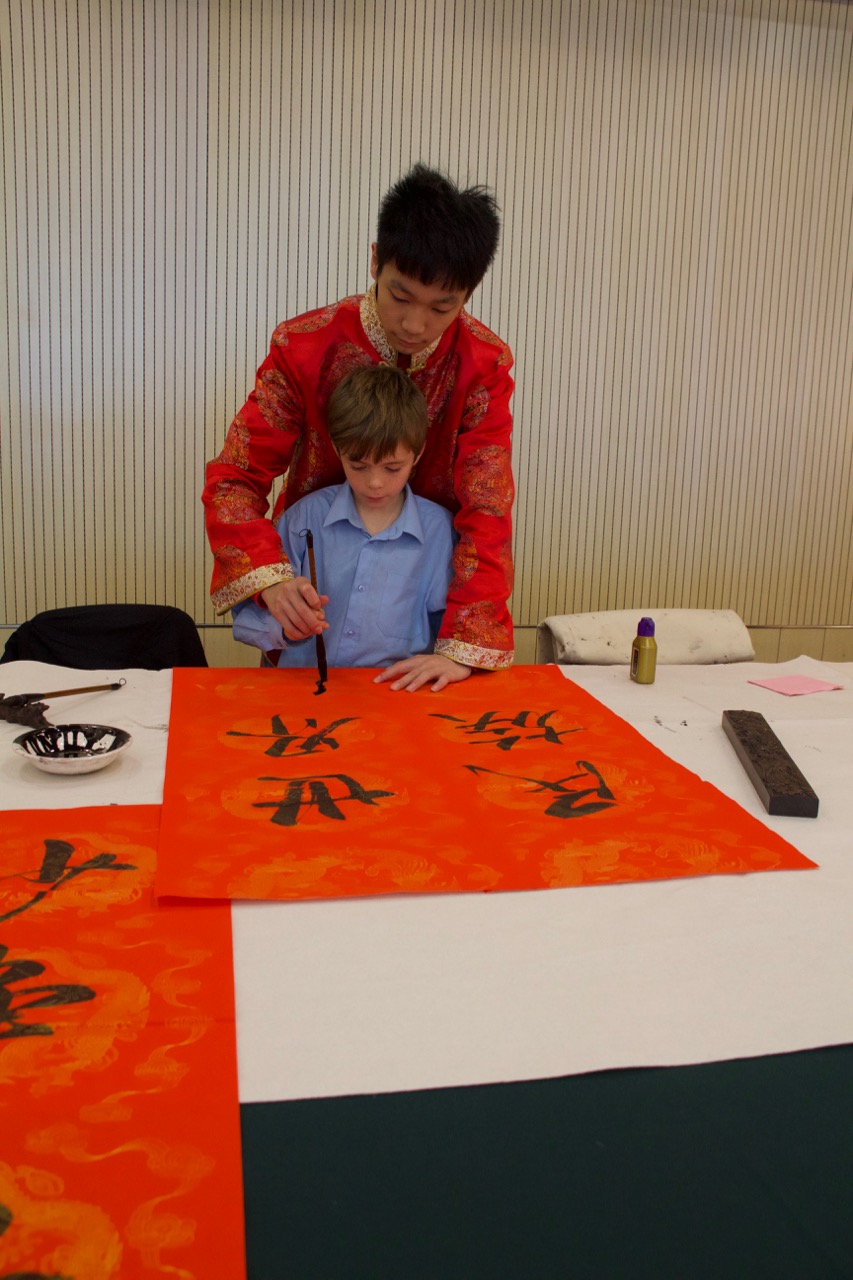 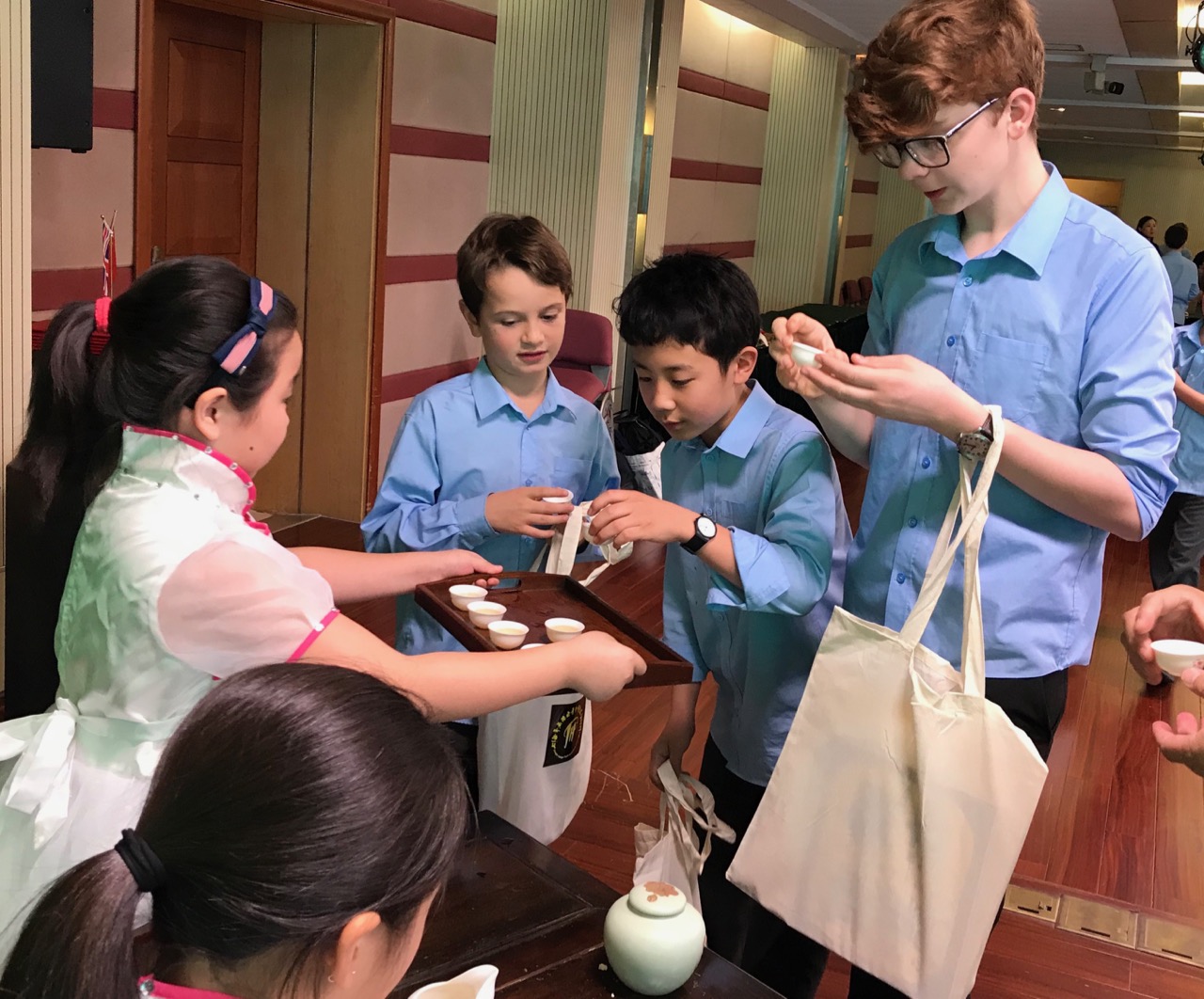 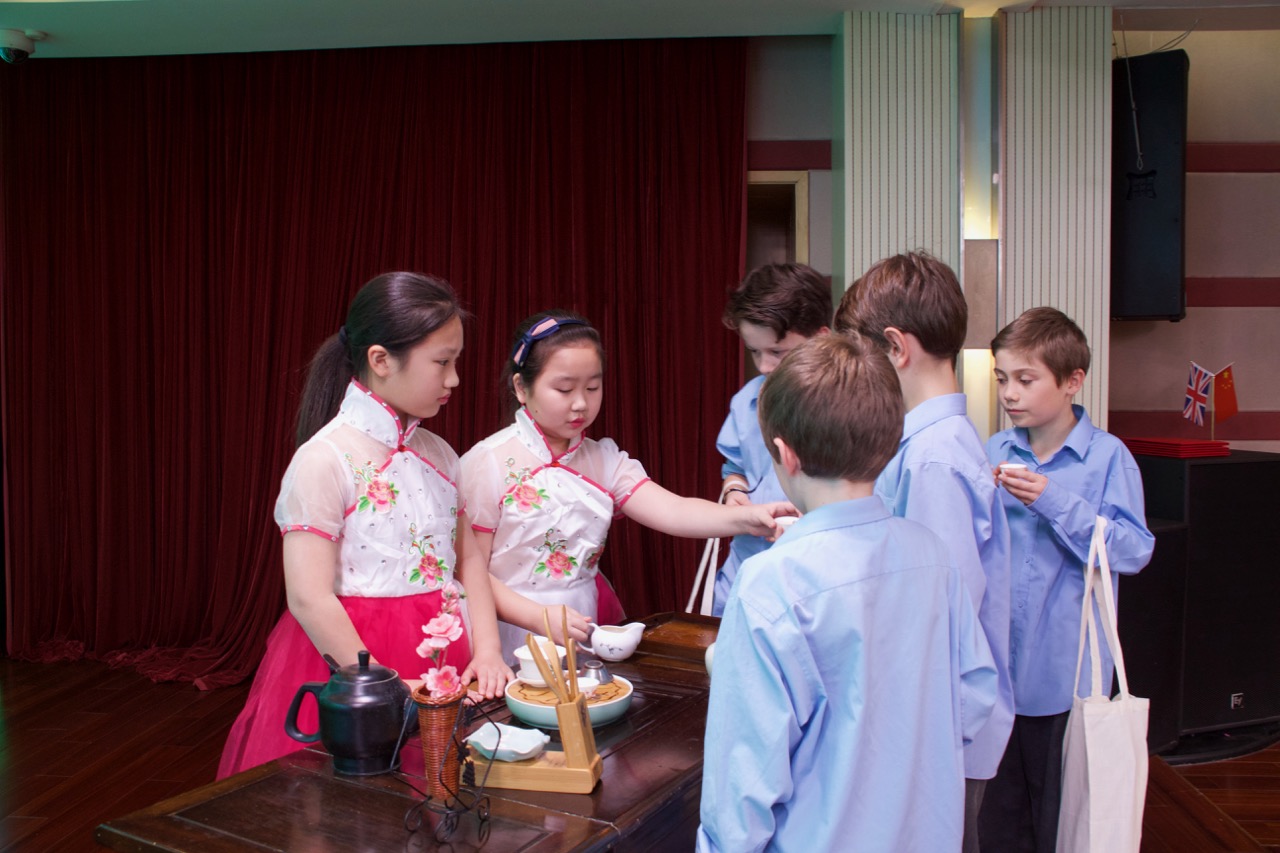 Across the road from the school was a large Chinese restaurant serving traditional Chinese food. We had been typical British tourists up until now. But not today. Large bowls of soup, packed with meat and steaming noodles and various unfamiliar ingredients – except not for a certain senior staff member who wimped out and went down the road to Costa for a latte and an egg sandwich. 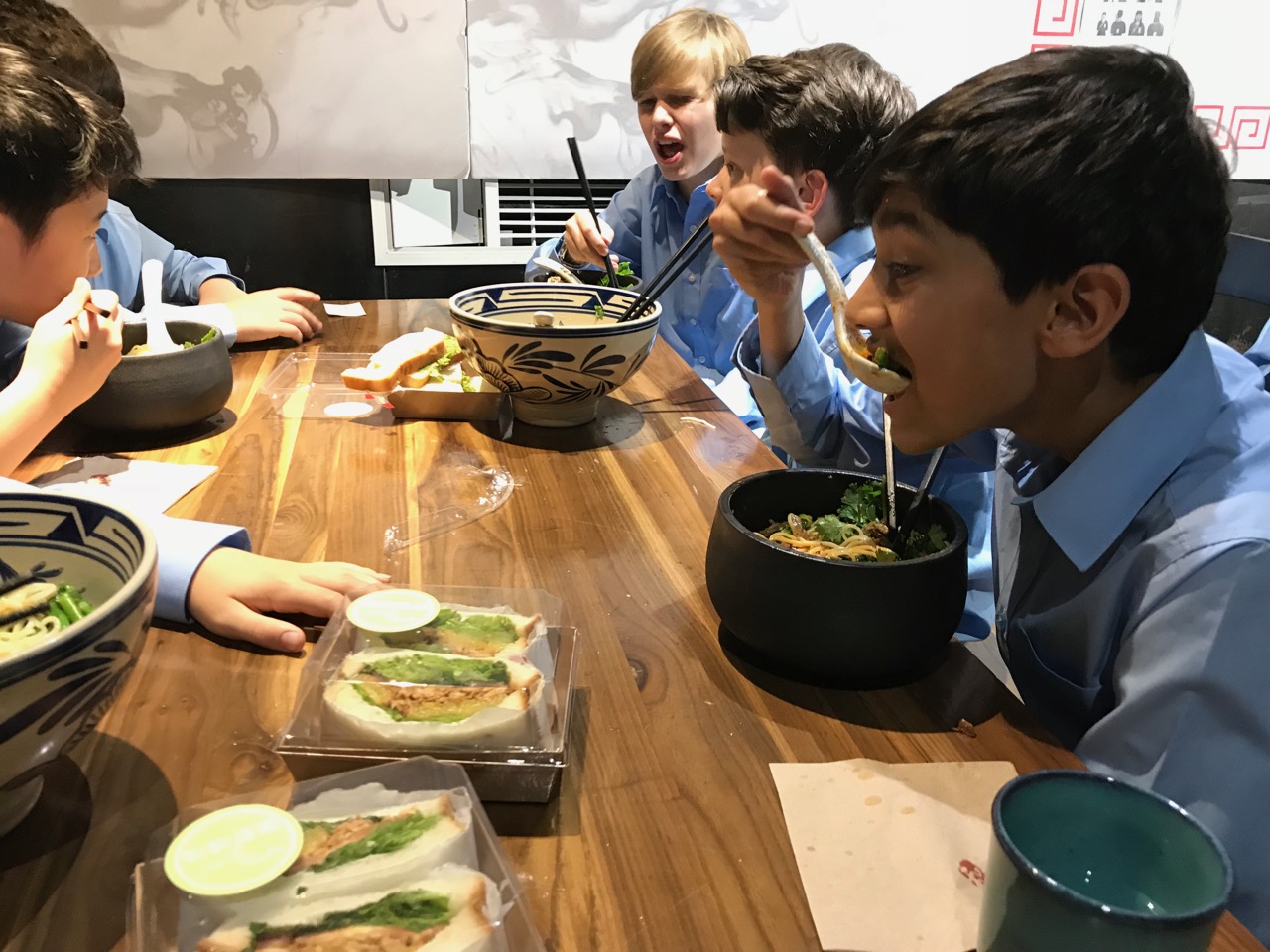 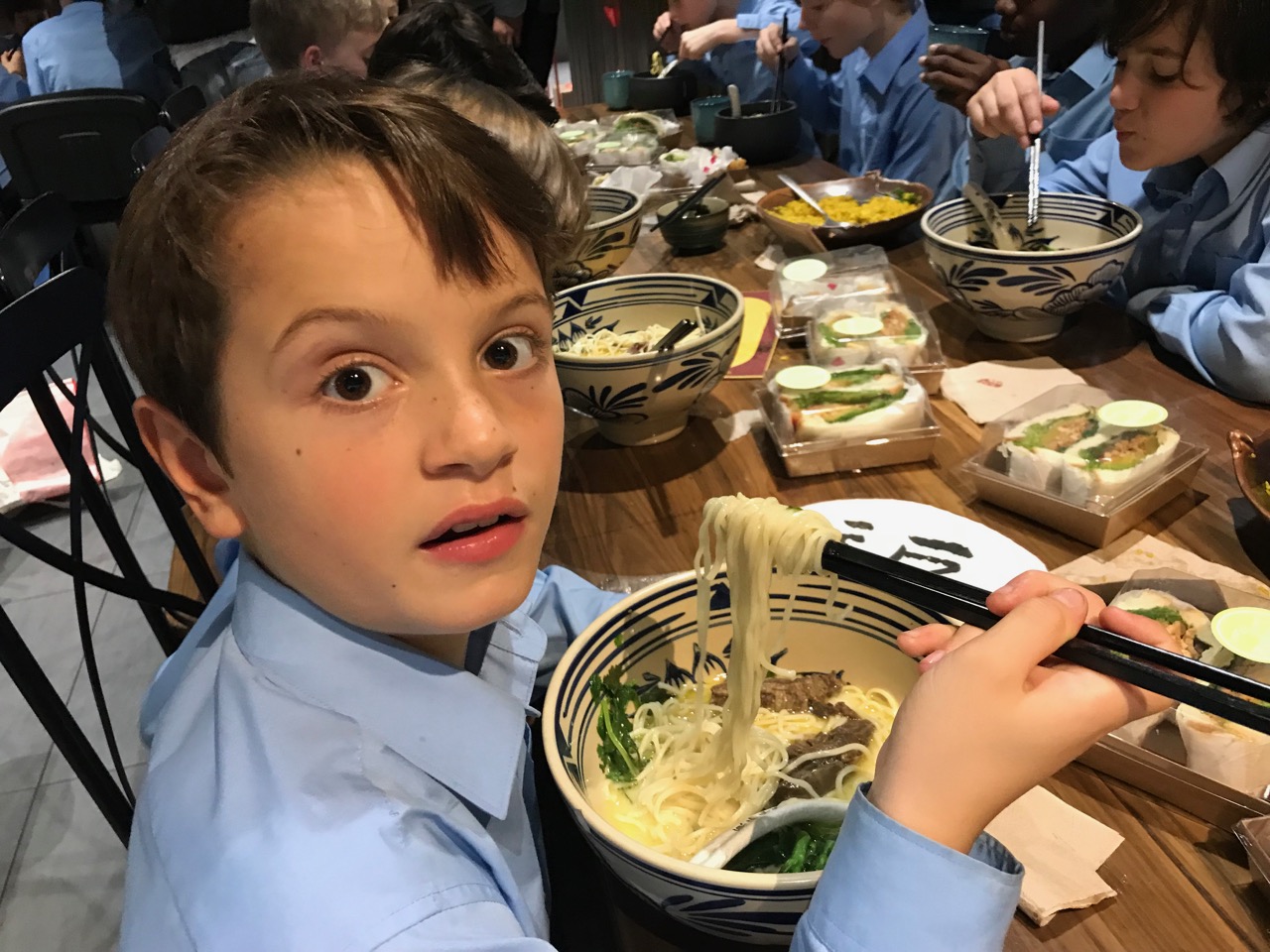 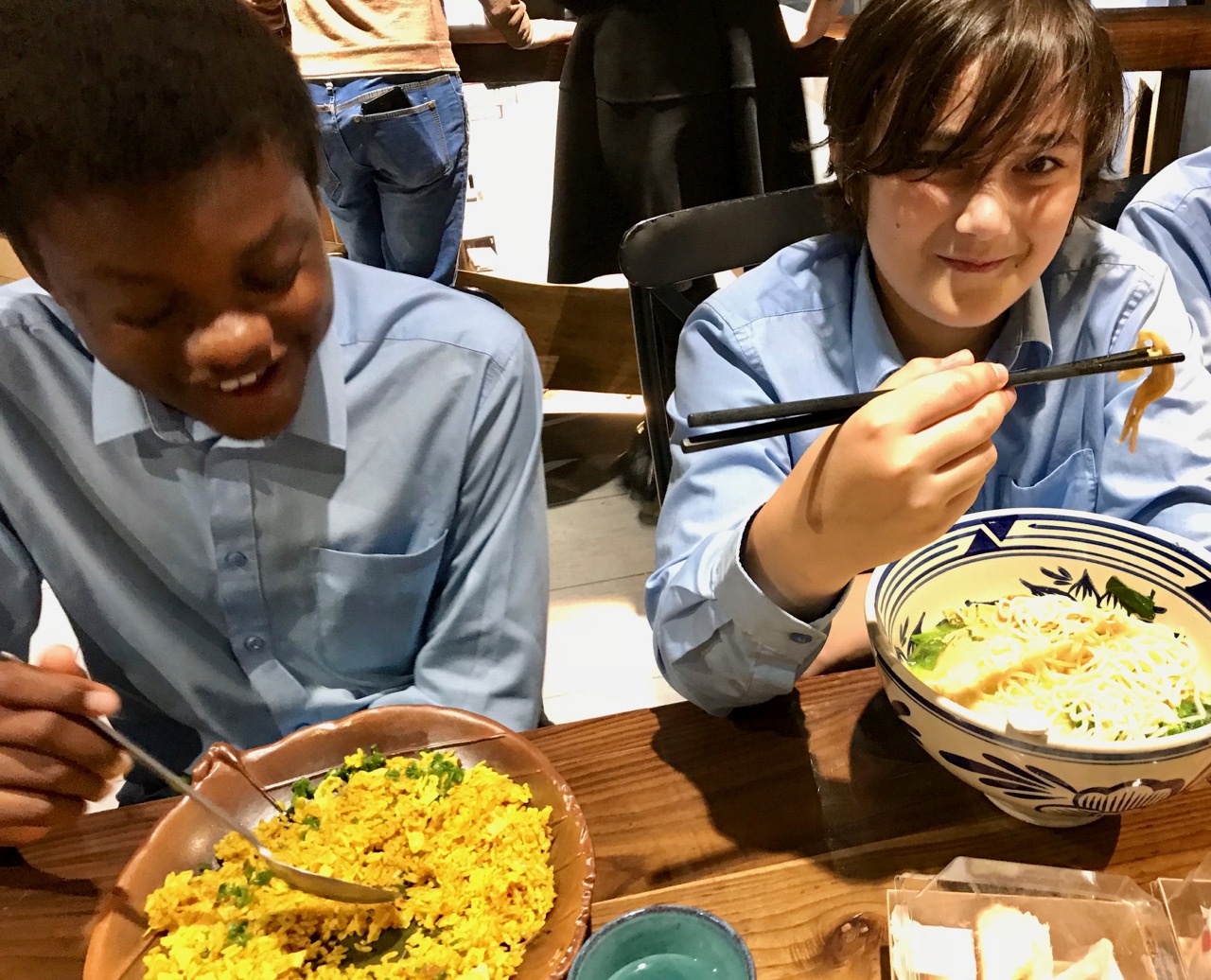 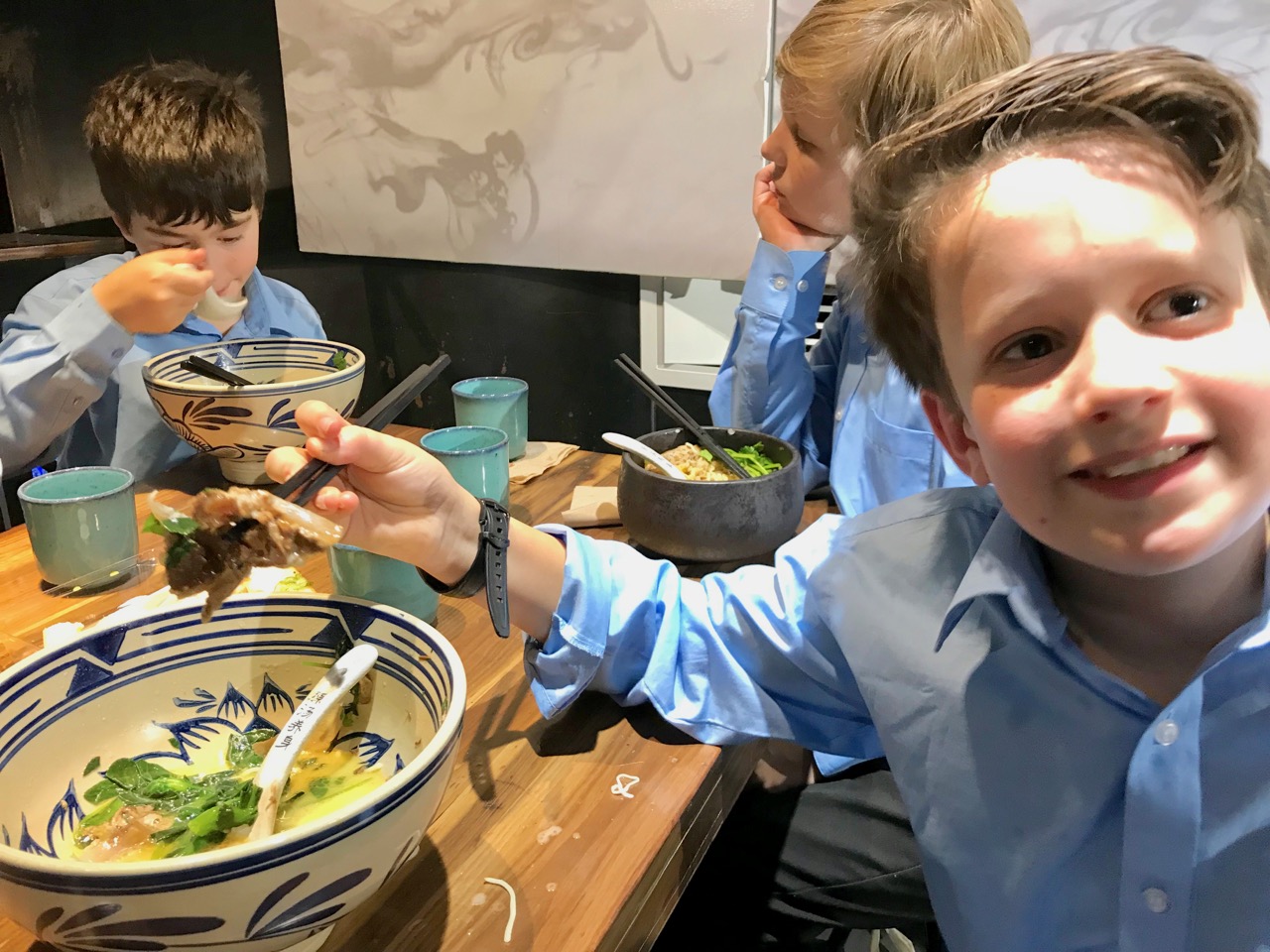 The evening venue was quite a distance away from the hotel so involved another coach journey. We had mixed feelings sitting on the coach clutching our performance bags. It seemed unbelievable that this was to be our final concert in China.

The venue was big with traditional wooden cladding and a large stage. What was different for us was that the stage could be raised or lowered in sections and that some of the audience would be sitting behind us on the balcony – no room for any blunders when it came to the choreography. We don’t do any ‘dancing’ in our concerts – not even slightly – most of us would be total rubbish. But we do have different positions for most songs to give some variety, and for the lighting to do interesting things – our robes are good for sort of painting with the lights. Anyhow, we had time for a walk-through rehearsal and we practiced a couple of our songs. We were more or less back to full strength and were sounding good we thought.

What wasn’t sounding so good were our talks to the audience. One of the people working at the hall during the rehearsal asked if we thought we were speaking Chinese, and he thought it was quite funny – cute, but funny. I don’t think we quite mastered the intonations that make all the difference in the meaning! Our pre-concert routine kicked in. We usually have a light tea of sandwiches and fruit. Obviously no chocolate as it clogs up our vocal chords. After tea, calm reigns just before concerts, so we are in the ‘zone’ for the show. Some boys disappear into the hoods of their back-to-front coats (bibs at tea time), or their robes, and have a moment of meditation or maybe they go to sleep – which looks pretty mad – plus, at this concert, for some reason our warm up exercises were accompanied from an ironing board – where our friend ‘mini-keyboard’ that travels the world with us had been positioned to give the notes.

The hall was full and the audience extremely appreciative and supportive. We had a grand final encore with the wonderful choir we met in the morning, the Spring Children’s Choir. 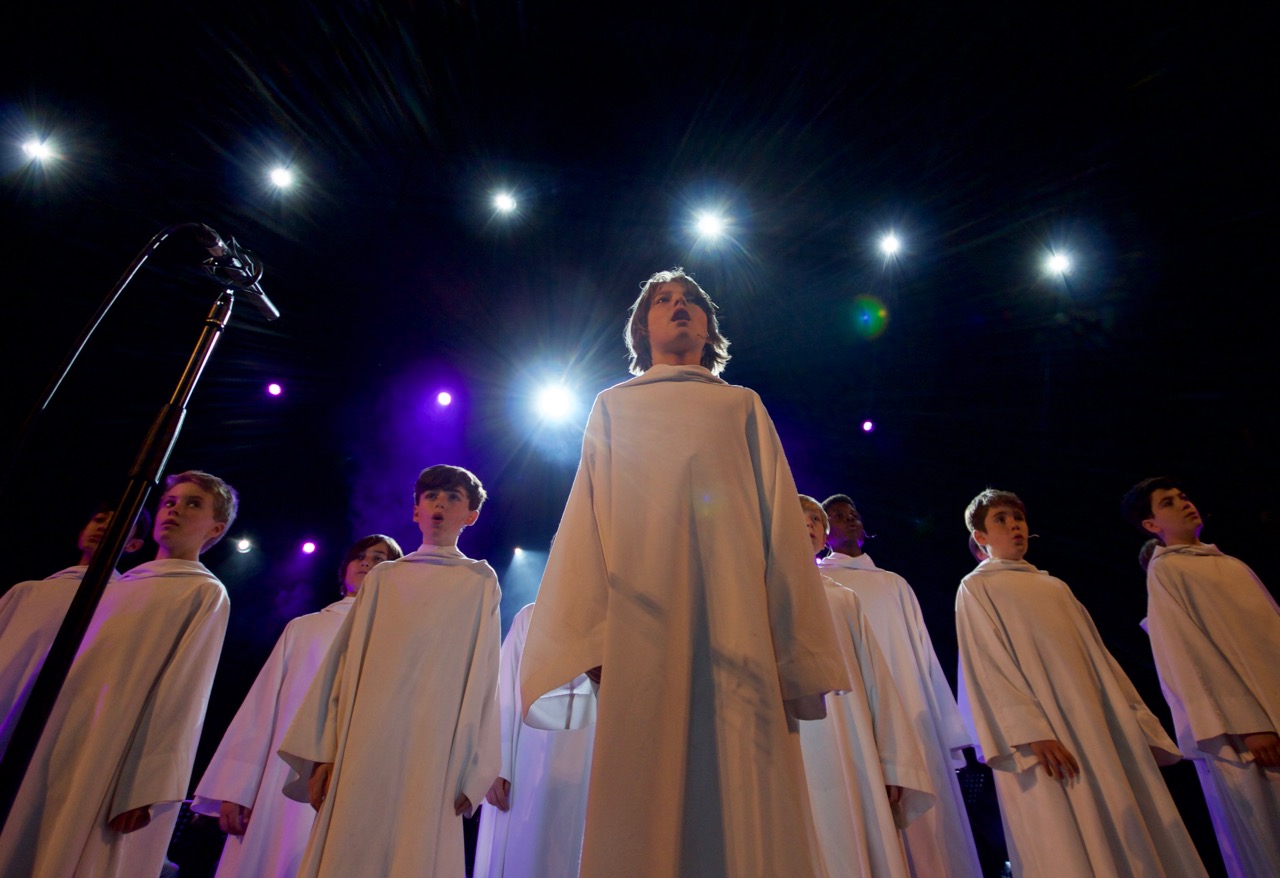 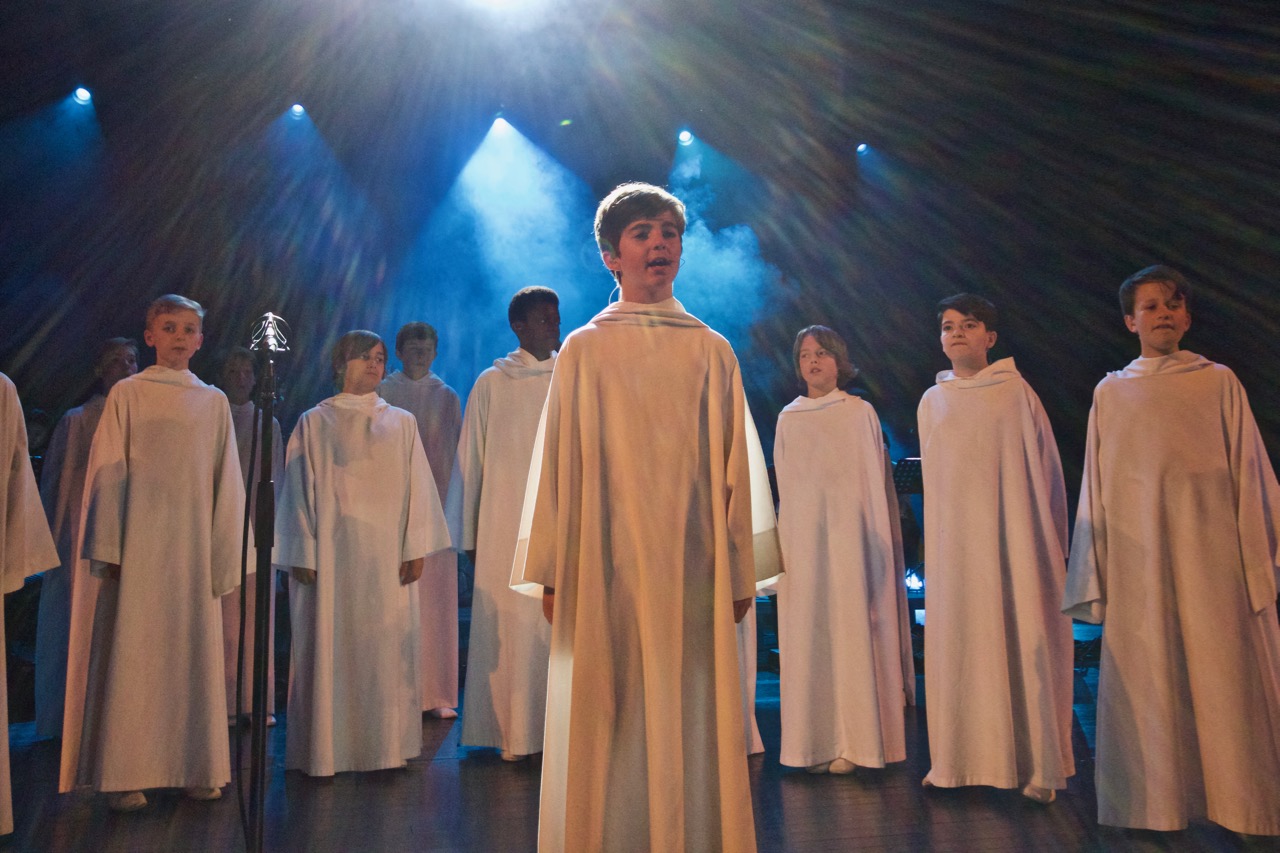 We really enjoyed it and couldn’t quite believe it was our final concert. China had been a wonder and a real experience that none of us would forget. The people we met had been so gracious and welcoming and the sights we had seen would be very difficult to recount to our school friends when we return home. After a good night’s sleep, we packed our cases, or rather for many boys, stuffed our cases and got someone else in the room to sit on them so we could zip them up, then made an early departure. Even though it’s usually a rush when we leave a hotel, we have especially to remember to check – in other words, the chaperones gently remind us to look in the bathroom for swimming stuff drying in the bath, tooth brushes in the shower hat, chargers plugged into shaver sockets and random single socks lurking in corners. Most of all though, if we brought any of our furry ‘teddy’ friends that we have had since we were 2 years old, and let’s be honest here, even some of us bigger ones do, we have to make sure they have not slipped down behind the bed. Imagine the terror of some long loved cuddly creature stranded for ever in a foreign hotel – it pains me to even describe the situation, I have tears in my eyes considering it – but I am not going to reveal the name or species of my own cuddly.

We grabbed a quick final breakfast and played Tetris packing the coach for the last time before heading out to Shanghai airport. Security surprised us – some of the battery packs we use for our handheld games got confiscated. But soon we were on board our Dreamliner for another long but comfortable flight. We arrived back in London that same afternoon. Back to school in the morning!  It had been a true adventure for all involved. Our first tour of China was over. 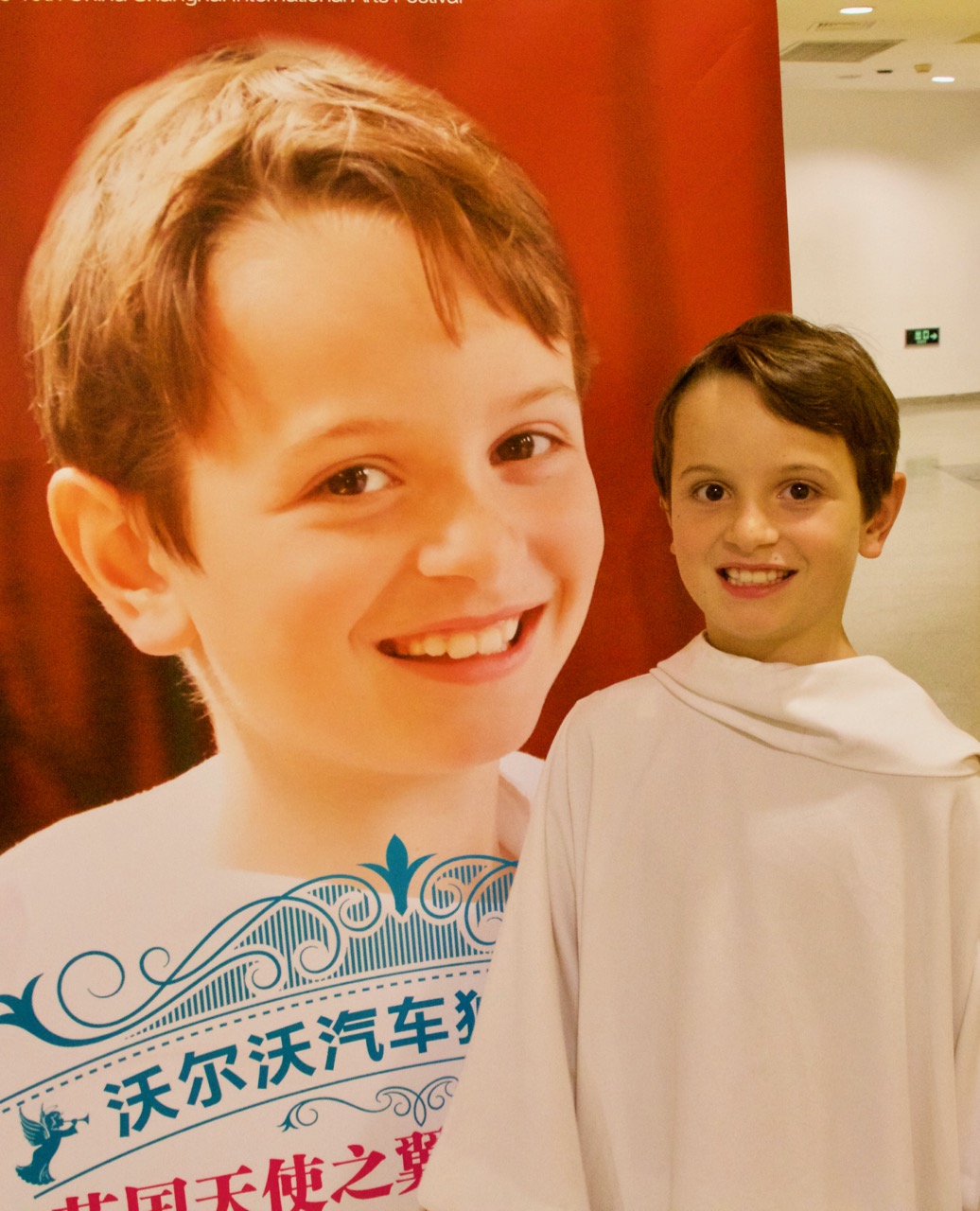 Libera of the US is now equipped to accept donations of stock shares. This allows you to donate shares of stocks (such as those traded on the New York Stock Exchange or NASDAQ) directly to Libera of the US and avoid paying the IRS capital gains tax. Then, Libera of the US as a charitable organization can sell the shares capital-gains-tax-free thus giving the organization the full benefit of your donation. We just donated stock shares to Libera of the US which will benefit their future tours in North America. The $15,000 worth of stock that we donated directly benefits our family in the form of a huge charitable tax deduction on next year’s federal taxes.

For information on the benefits of donating stock versus cashing it in and donating the cash, see this article from CBS News:

Very good to hear this, Libera. You should benefit from it immensely. Delightful move! Also, will Libera ever do that hilarious “Meow” opera song. I know it may seem cliché but Rob is talented at making music not sound cliché!

Oh my, “The Meow Song” by G.A. Rossini would be a perfect addition to the choir’s songs. Though I understand the two (duet) choristers singing have to do it without breaking a smile or laughing, as well as the rest of the choir behind. Can you say difficult for young boys, though not impossible. I would love to hear it sung even if the choir did break down into giggles.

Thank you for the reply kind sir.

Another brilliantly written and funny blog. I really enjoy these snapshots of life behind the scenes of Libera. Thanks.

Very well written, it sounds as though you have had a wonderful time.

Thanks loads for the time to collect and record these thoughts, as humorous (and accurate) as they are! It really gives your devoted fans (and family/friends too) a feel for what it’s like to experience the joys and unexpected adventures of a tour. A big thanks as always to your families for allowing you to be a part this unique group (ministry?), and all the staff/volunteers for the untold hours invested. I’m glad that, on top of your memories, you’ll have video and recordings to one day share with your kids & grandkids. God bless.

My stomach hurts from laughing too hard, great one dear. I wish you guys an exciting life.