Before we began our journey to the top of the world I had watched a film – a normal thing people do to relax before a journey.  This film was called ‘The Muppets Most Wanted’.  It was about this frog called Kermit who was mixed up with this evil frog called Constantine.  He is sent to a freezing cold prison in Russia where we get our first stereotype.  Everyone in Russia is very straight faced and stern and treats Kermit with disrespect and coldness.  (hahaha)  I did not get to finish the film and was left with the lasting impression that everyone in Russia conformed to the stereotype. 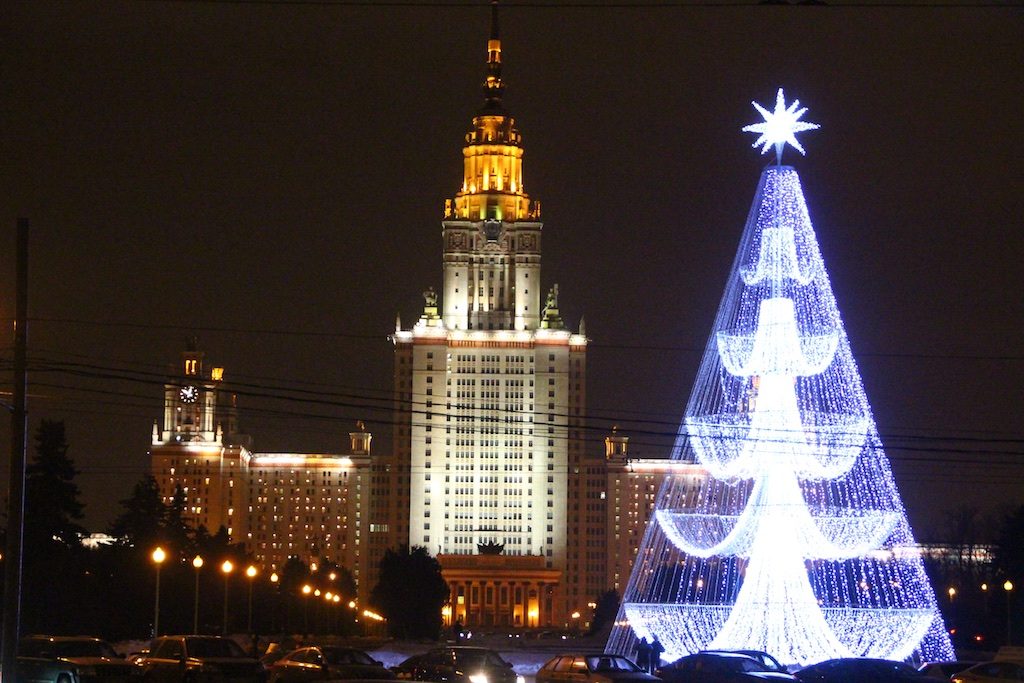 When we arrived in Moscow the first thing we noticed, while on the coach, were the LIGHTS.  The city was lit up with millions of sparkling lights and it was as though we were driving around inside a giant Christmas Tree – a cold Christmas tree at that – but these were so special, even compared to London and New York, that they lured everyone off their handheld games gadgets and gizmos.  They captivated their attention, which left their games with dull faces.  When we eventually reached the hotel it was very late.  And cold.  Which meant that everyone was very glad of a bed. But anyhow, even before we met anyone in Moscow, the city had a smiling face, not like the Muppet movie!

When we woke up, and after we had breakfast, we had a bit of hanging around as the hotel was not near any main tourist places to look at, but it was interesting to see the ordinary things of life in Moscow – the roads and cars and shops and stations and snow everywhere, and particularly the underground metro stations which are like mini cathedrals.

In the evening we had our concert in the most amazing venue you would ever see.  It was a modern building resembling a giant topsy turvy mirror and had a giant treble clef at the top.  We made our way inside and the first thing we noticed was the organ – or was it an organ?  Or was it several giant spiders pinned up against the wall?  We are all still puzzled.

The hall was packed for the concert and buzzing.  Before the concert started the musicians refused to enter the hall until a certain bell struck.  After each song I realised that the Russian audience was equally friendly and welcoming as the Asian and American audiences.  At this point I was ready to sue the Muppets.  By the end of the concert everyone was on their feet clapping and shouting out. We were so encouraged by the astounding response of the audience. Thank you audience in Moscow!

During the interval we were introduced to this funny Russian snack featuring a Polar bear on the wrapper holding a chocolate bar.  However the snack contained NO chocolate.  How disappointing.  But we moved on.

A small group of us were interviewed while another group met a visiting Czech choir all of whom were very friendly including the interviewers, though we had the usual problem of needing someone to translate!  One of our Libera boys who speaks Polish as well as English learnt some Russian – but none of us could manage enough for interviews.

After the concert we were off to see the Moscow lights in full which meant we were getting back in the Illuminate Coach decorated with Illuminates. We went to a high point and saw the whole of the Christmas city. 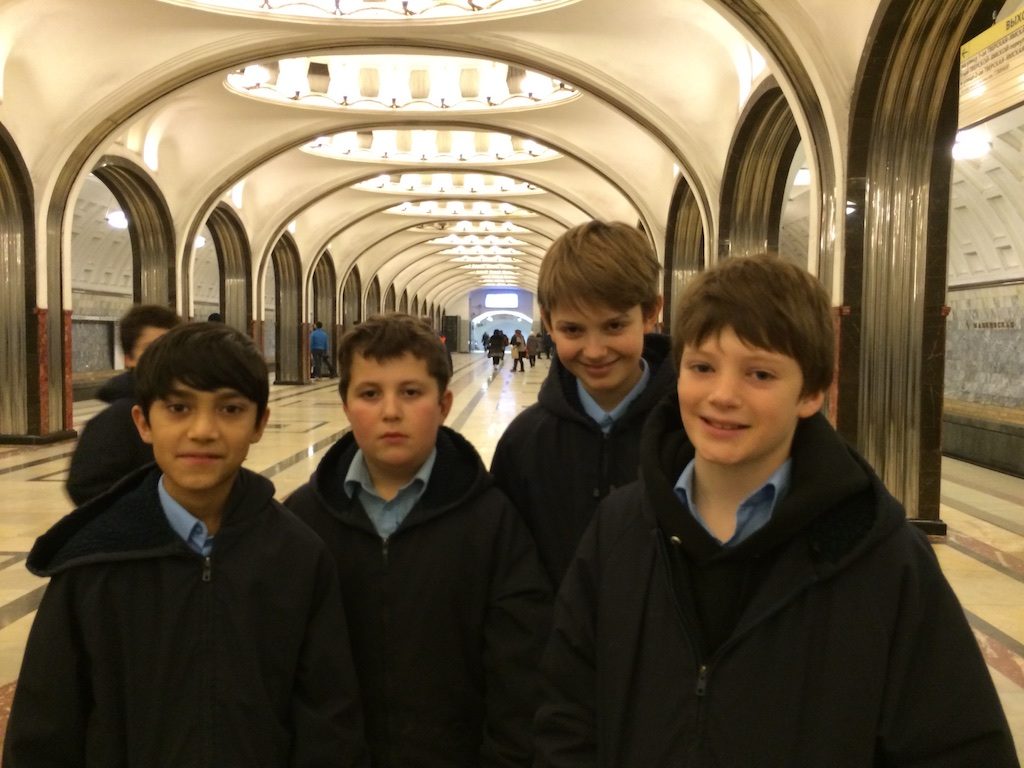 Our last day in Russia was Sunday, the Sabbath Day, a day of rest.  However rest is not a word in the Libera dictionary.  We were going to make the most of our only full free day in the Russian capital.  So off we went sightseeing.  We took the Russian Metro which was great fun and all the trains were decorated differently just like the aforementioned stations which all had amazing designs. 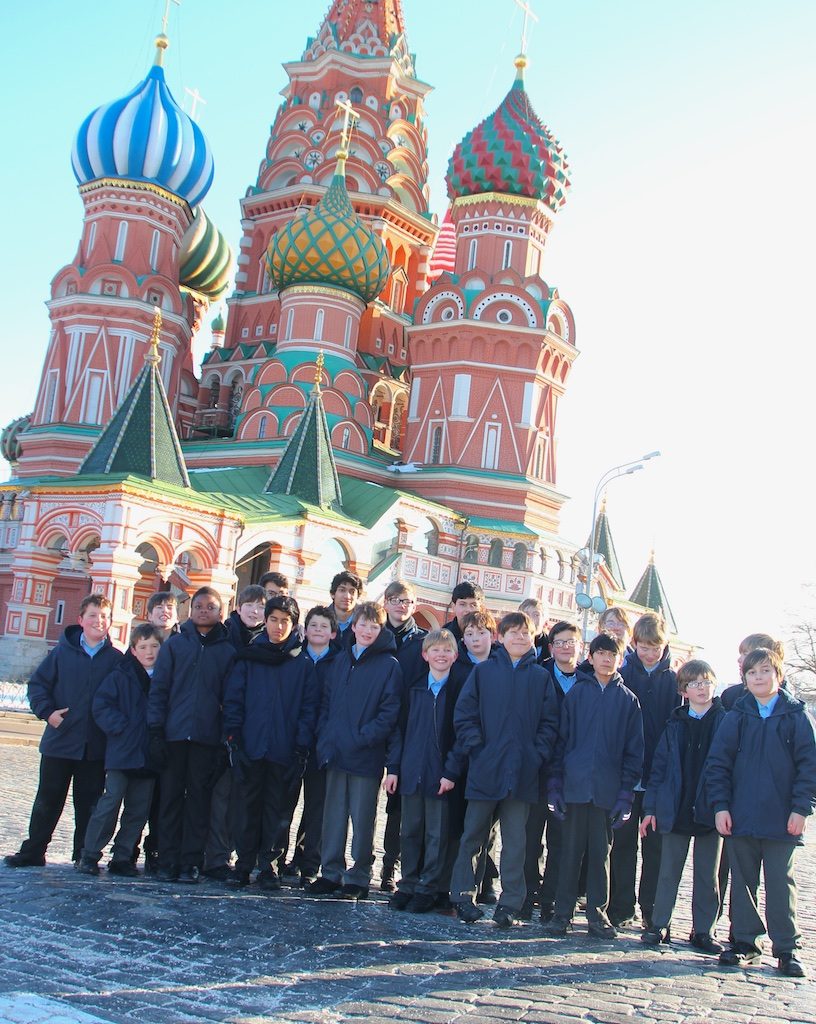 When we arrived at our destination we visited the Kremlin Wall including the building at the end with the various coloured turnips at the top of the towers.  We did not go inside the Turnip Building but we did walk around it making the most of the frozen lakes and the snow. We visited the tomb of the unknown soldier and saw the eternal flame.  On the return journey we stopped at a local market where everyone bought souvenirs such as Russian hats and metal badges.

Arriving home, I finished the Muppets movie.  By the end of the movie the Russian prisoners had become happy clappy ballet dancers.

Next:
Japan in December »
Previous:
« Libera in Japan

7 Comments on “The Moscow Blog”

Was great seeing a new blog. It’s been a while since the last one. The quality of the writing meets or exceeds the standard of the previous bloggers. I hope the next blog is about your tour of the US this Spring. 🙂

Very nice pics! You are very lucky lads; but then you certainly deserve all those places you go to!
Your singing is superb & exquisite!! I would love to meet you…..but that would mean you all coming up to Manchester. Plenty to see in Manchester,!

Dear Libera: Very nice, thanks for sharing your pix and experiences with us :). In case your interested, that “Turnip” topped building is St Basil, a Russian Orthodox Church which is now a church museum but for some reason I think you already know that 😉

Kev, friend and supporter of Libera

Ps: We need to find a way for Libera to do a concert/discussion cruise on England’s RMS Queen Mary 2 ocean liner ship. Guess the law is that such performers need to 21 years of age or older. Perhaps the older lads who work behind the scenes could do so. I wish the Cunard Cruise Line could waiver the age restriction. The boys would have a blast on down time on that grand ship!

It was really nice to se you in Russia, however, it would be nicer to see you in China

What an interesting Blog and my hats off to the scribe, you did an excellent job. I agree with what Lawrence Burtelow said about this “new Blog” which was “It’s been a while since the last one. ” I so enjoy reading all about your tours and the fun you had visiting all the places you do, most of them I will never see myself so remember to enjoy everyday for all of your fans also. All of you deserve to have as much fun as possible because of the endless hours of practice you put into each and every tour and concert. I’ve enjoyed the 2 concerts I’ve been to and I hope and pray that I will be able to see Libera one more time.
One last word to her Majesty: Please consider a Knighthood for Libera’s creator and leader, Mr. Robert Prizeman as he has done a Brilliant job.

I agree with Ian, you guys should write us a blog from wherever you are touring in the World including non London locations in the UK.
I also think Robert should get a knighthood.
Thanks for your update, you may have a future in journalism, young man.
May God bless you and all your families always and give you journey mercies every time you travel.