When we sing directly into the camera, it feels like there’s someone staring at you while you sing! The only way to get over it is to imagine that it’s a mirror, and you’re singing to yourself. 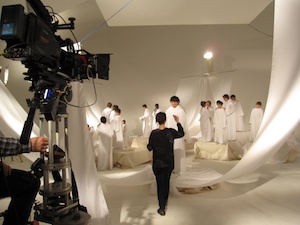 It’s no good being a bit shy – the camera picks up how you feel and makes it more. Actually the camera can take your concentration because it moves. This one was on railway lines and rolled along while we were singing.

Make-up smells really weird not that I need much cough cough…. When they pamper you, the dusty stuff goes up your nose.

We really have to concentrate – obviously on singing – but also because often it takes ages and millions of years to get the lights and camera and technical stuff OK, so that when its our turn, some of us have drifted off daydreaming so we have to think hard about what we are actually doing! 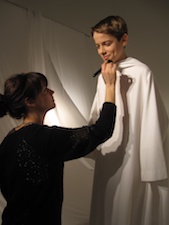 We wear our robes nearly all the time on concert days and video shoots. They may seem heavy and hot, but really they are quite comfortable and cool. We don’t have the frilly ruff and collar things some boy singers have!

We had a lot of fun filming, because while some were being filmed, others were able to watch them in the director’s small screen.

After we finished one of the two songs, we had lunch. This consisted of burgers, pies or omelettes – so there was messy eating with vinegar, ketchup, and salad dressing making our back‑to‑front coats we wear to protect our robes no longer blue, but a pinkish-brown colour.

The hoods are like horse ‘nose-bags’ and collect spilled food in them – but not me of course. 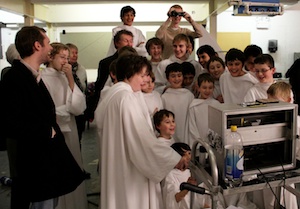 We don’t get much idea of what the video will be like while we are filming it. There are so many different takes. But it’s fantastic when we see it all put together – really amazing.

It’s just completely brilliant doing stuff like videos – even though it takes a long time, there’s so much to watch and do in the gaps –  we might do homework…..or play psp/ds games…or just talk.  We go all over the place in Libera, the world really sometimes, so we are quite used to being together for long times and are good friends and have our special jokes and things to fill in boring time on planes and coaches.

The director, after we had finished shooting, gave us a chance to do a “mess‑around” version, which consisted of some ballerina twirls, sunglasses, scarves made out of ivy, fireman’s lifts and a big cardboard box. Quite mad, really. Don’t know whether the director kept it or not! 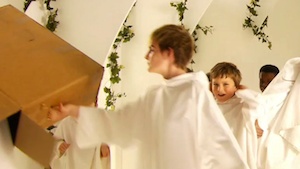 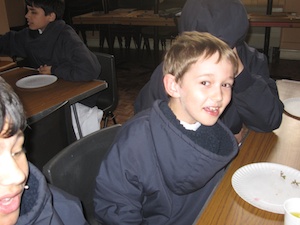 All of you boys in Libera are amazing! Your singing and the emotion you put in to it is superb! The BIG question is – “When are you comong to Australia?”
Soon, please!

I agree, your harmonies and high notes are impeccable, you make it look effortless. When are you going to come to Yorkshire? xx

Why you wear clothes hoods forward? 🙂

Just received my best of Libera, I will get many hours of listing in, I have other cd and play them every day, I go cancer last year and a friend lent me his cd and I got hooked and go my own. The boys have great voices and I hope they go on singing.
When I was young I use to sing, but when my voice broke I never sung again and now I regret not singing.
All The best to all of you at Libera

Amazing!!! I’m glad you had fun filming the 2 music videos!.. Hope you guys will make more videos. I always sing your songs. I talk about Libera all the time to my friends and now they listen to your music. I memorized the song Lullaby, the solo of Josh and Time. It’s very amazing because I sing it all the time and I love it. You are amazing, brilliant, and angelic!! God bless you Libera!!!

I’m so glad you had fun filming the videos!

Your voices truly are angelic, and calming.

so charming…
I see this was the first Libera boys’ blog ever,
and I appreciate the theme…
I have thought about video filming in boy choir performances myself,
but this one here is different, as you are not documenting, but putting something together for a specific film.
Nevertheless, wonderful thoughts of you and nice insights!