And so. The final blog begins.

Taiwan is of course an amazing place. But one of the things we haven’t mentioned is the fact they have some really amazing people too. One free day, we found ourselves visiting the Paiwan school, a coach journey away.

We saw our first sights of the Taiwu Elementary school, and since stepping foot off the coach we were all amazed. Greeted by some of the staff and head teacher of the school itself, we began our tour with a look around the school. From the Library to the murals on the walls, at the same time learning about the school, we found ourselves picking up Paiwan culture. 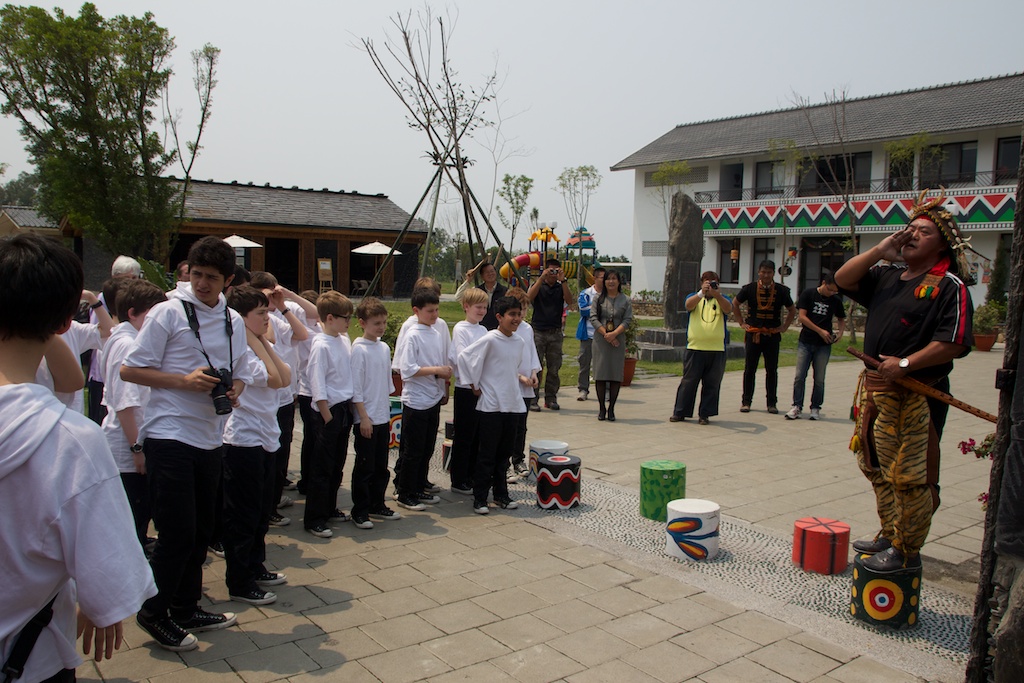 The school was nothing like we’d seen before. Of course, we all go to school and know what it’s like there. But I don’t think any boys have been to a school where they have beautiful child-carved wood carvings hung up on the walls, or a pretty story running around the school walls, or an open aired building. The weather in England is simply too horrible for any of that.

One of the best things is, we got to see what learning was like in a completely different country. Instead of seeing kids recite the English alphabet, we heard a rather different one. Instead of seeing the usual school dinner we have, like pasta, we find ourselves seeing a tasty local chicken meal. And we definitely didn’t have farmland and a barbecue in our school back yard either. 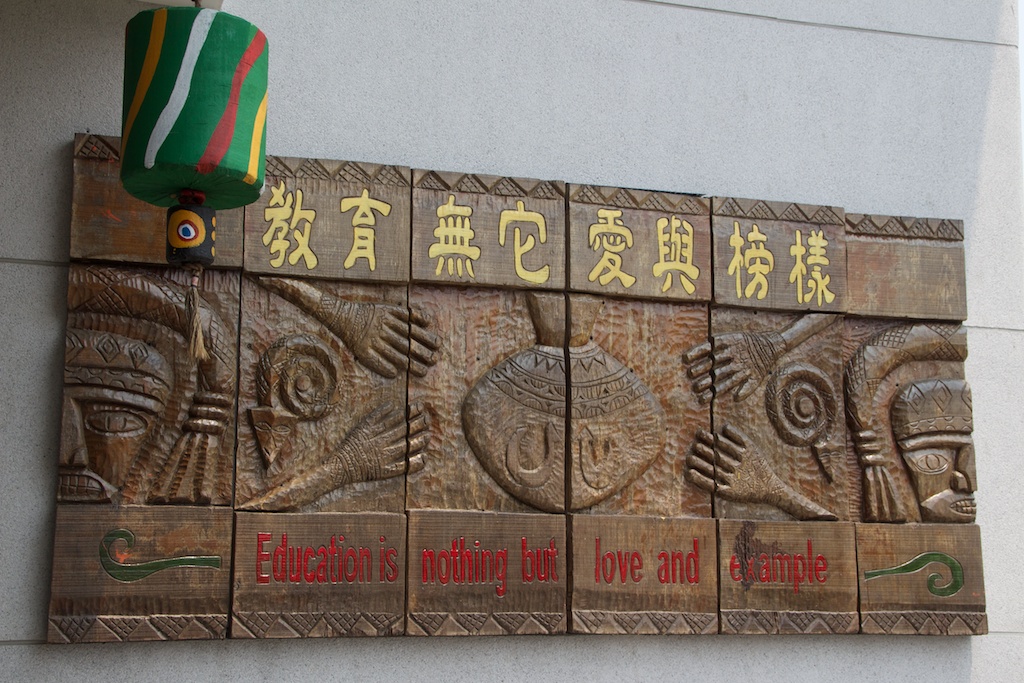 As all schools do, they have their musical groups and after school clubs. We were invited to listen to “Vinqacan ta senay nia vuvu”, a choir taught through the means of oral tradition, to sing folk songs of the Paiwan people. We all sat in a room, and we were greeted with boys and girls dressed in astoundingly shiny, amazing tribes clothes. What’s even better, they’re voices were just as good as their dresses. Being a choir, we know how it’s like to sing; and the sound they made was just absolutely stunning. It was completely different to anything we’d heard before, a completely different language and a completely different style. All of this made it an amazing experience, especially as some of the choir boys had a go at their traditional instrument, the nose flute. 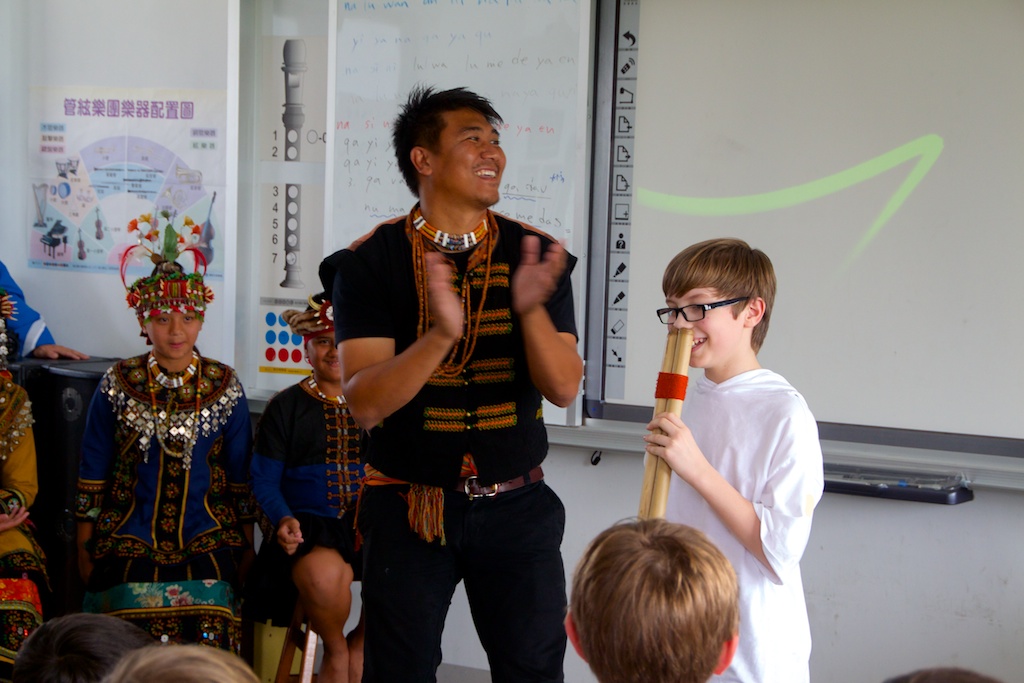 We got to eat dinner with some children, and we got to meet some new kids. Of course, the language barrier was a little problem, but we learnt a little bit about them whilst munching on our sandwiches and specially prepared local delicacies. Afterwards, we all gathered at the front of the school to see all the children, and thank them all for giving us a great time. We also got to meet the singers of the school’s album, and even a few signatures too. We said our goodbyes, and found ourselves off to another place of wonder – the largest Buddhist memorial centre in the world. 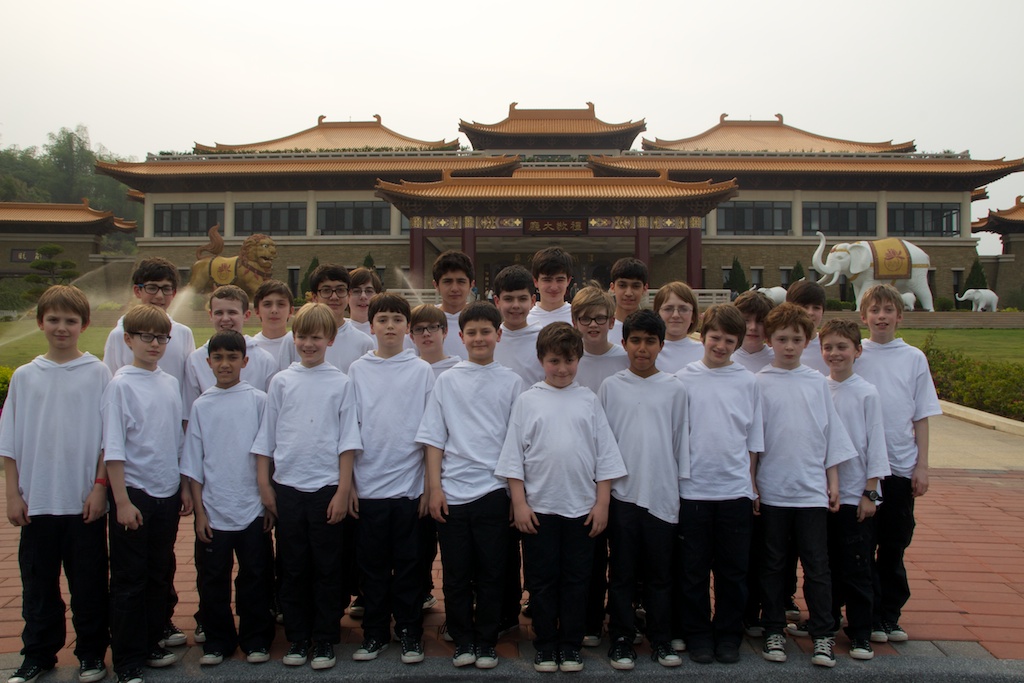 We got to the front gate, and saw the huge white elephants and lions at the front of the centre. We got sprayed by a few stray sprinklers as we tried to take in a huge sight. We were greeted at the entrance by a monk and our tour guides, who were going to be leading us round this ginormous wonder.

We watched a short video to explain to us about the centre; why it’s here, what’s special, and we found ourselves interested to see more of the temple. We moved through to the large open area, in-between the eight tall pagoda-style structures (representing the 8 noble paths).

After the long path to the temple area (see what I did there) we entered the main section up the top of the 16 hectares huge site. We found ourselves entering an almost interactive museum area, which taught us much more about Buddhism and its followers than some of the boys would ever learn in their religious education at school. 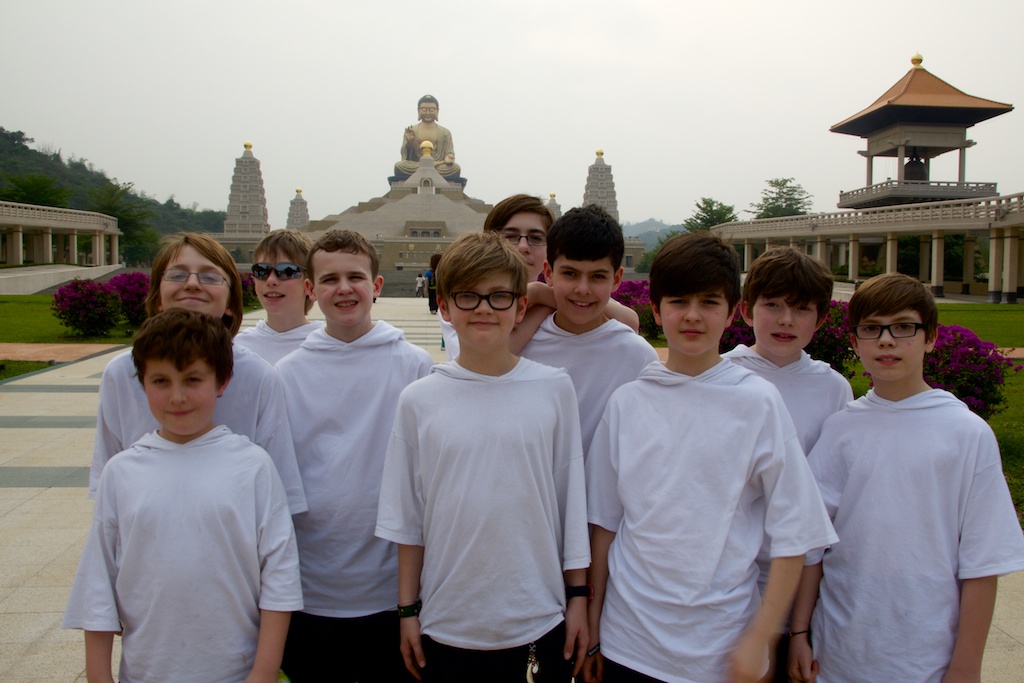 Then, we moved on to one of the prettiest rooms and most sacred in the whole place: the room that housed the Buddha tooth relic. We saw in the video and learnt all about this rare artefact, one of the reasons for building the centre in the first place, and we silently gazed at all the paintings, candles, statues and carvings.

With a final trip to other parts of the centre like the theatre and auditorium, it was time to depart such a beautiful place, and carry on with our tour.

It looks like an absolutely brilliant trip, I so love the fact that music is bridging so many gaps between the cultures of our world. Libera is doing so much to open the many corners of the world to the arts, it is to be commended. I hope to see you in concert someday, perhaps a Gulf Coast tour is on the horizon?

Hey,it’s glad to see your blog! I would never forget the wonderful performance you made.Hope you come back Taiwan again.

Having just had the enormous pleasure of seeing you all at Guildford on May 11th, well done on a superb concert, it is great to see this Blog continued. It is written very well and shows us all something of what is like to be Libera on tour. This year shows Libera as a strong organisation and as a big fan I am very pleased about that. Long may Libera continue. Best wishes for your next venture.

It’s Libera’s first time to come to Taiwan. Nice for you guys to have a great time while visiting Taiwanese aboringinal tribe. I’m envy of that because though I’m a taiwanese, I don’t have chance to visit those beautiful places in Taiwan.
Good for your concert at Guildford, I didn’t went to that concert,though, I heard that there were 41 boys there and with a new song I’m Dreaming of Home. How I wish I were there and hope I can hear the new song soon.

You’re a great choir. Amazng boys. I always read your blog with real pleasure. I really wanted to see you in Guildford but I couldn’t. I’m a big fan of yours and your music, and I hope someday I’ll be able to see your performance live. Greetings from Poland 🙂

Thanks for coming Taiwan Libera:DDim very happy to met you guys first time!!! Your Concert is Wonderful~~~~How’s amazing angel voice!!!
So I go to the concert twice~and I hope you enjoy anything of Taiwan and Taiwanese food!
Wish you can come back to Taiwan soon:)

i love your music and england too.

How can i get an autograph Libera? please:-)

Thanks for your the music – keep it up

sorry for my bad english