Hello again, people of the webworld! This is part the third of the Libera Summer Tour blog! It has been a fair few days since the last blog update, so here we go…

The day after our Chicago sightseeing was a travel day to St. Louis, Missouri. So we spent most of the day in our beloved coach (or car, bus, or whatever is your version of the big elongated car that can hold a lot of people and luggage). As road trips go, this wasn’t so bad. We were all just “chilling” in the coach – literally, as the difference in temperature outside and inside the coach were astronomical! Some of us slept in there, others watched a film, and most of us were playing on DS or PSP consoles. What a cluster of noise we have on coach journeys! Nothing like the sound in our concerts, rest assured! 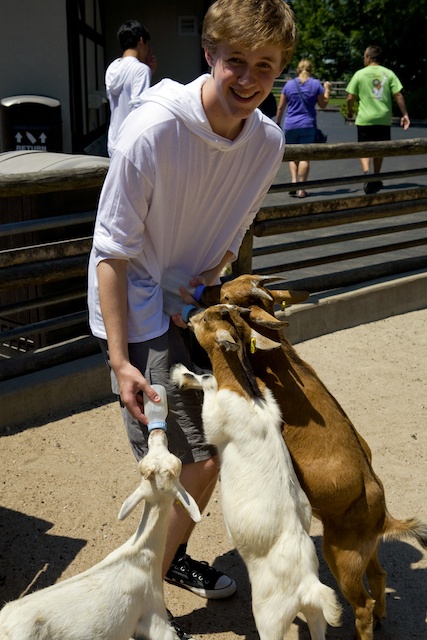 Wednesday was a slightly more eventful day. In the morning we went to Grant’s Farm, a lovely – well, farm – with lots of different animals. We saw deer, elephants, bald eagles (America’s mascot – and they aren’t actually bald!) giant turtles and camels, one of which we managed to feed without being spat on! But probably the most memorable attraction in that place was the baby goat pen. You could buy loads of bottles of milk to feed them with, and once you got into the pen, at least ten goats would crowd around you to get at the bottles! It was all very good fun; Liam had three at once, and we all thought the goats, which went crazy the moment they saw a plentiful supply of milk, were attacking him!

Anyway, after that fun morning, we went to perform in St. Louis’ Basilica. What a beautiful building. There are so many mosaics on the ceiling it’s astonishing! The effort that went into piecing all those little glass shards together to make the huge mosaics is astounding; they used to think they had the biggest quantity of these glass bits in the Western hemisphere – until the Vatican kindly pointed out that they had a few more! Although St. Louis’ Basilica can still boast that it has the largest amount on the ceiling – for that is where all the mosaics are found, nowhere else. The concert itself went really well, and because the basilica is so large there was a huge delay in sound, making the music even more ethereal. One really fun thing was that we surprised the audience at the beginning of the second half by placing the older boys in a gallery way higher up above the stage for ‘Te Lucis’. 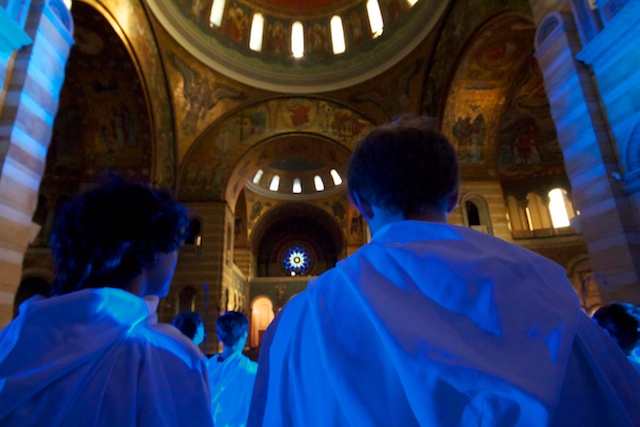 It was really funny to watch all these heads turn to look and see where the sound was coming from. Afterwards we did our first signing of the tour, which was really fun. It even surprises us to see how fast we can write our autographs!

Thursday was another day spent travelling. However, in the morning we went to the pool for about an hour. The water was so refreshing in the heat! Anyhow, after that we started our drive to Frisco. In fact, it was so far away that we had to spread the journey over two days! What a trek! So, we started it, and we had to stop in Arkansas for the night. There are so many locusts in that part of the world it’s unreal.

Everywhere we looked there would be some sort of insect, be it giant butterfly or tiny moth. But even Ben managed to over come his “insectophobia” for the night, for our motel was very cushy. But the next day, straight after breakfast, we continued our voyage to Texas. Although we did stop off once to look at a really cool, Wild West type town. It was really cool – it would have made it even more real had Clint Eastwood appeared out of nowhere in a poncho to have a shoot-out!

Libera, you are angels sent from heaven. You are GOD’s instrument to show his love for all.

Nice picture of Liam 😉
BTW does Ben really have an “insectophobia”???
I hope we can see more photos and videos soon:)
Greets from Germany! 🙂

Well boys you’ve done it again! Another lively account that really puts us in the picture. As I write this you will all be tucked up and sleeping. You only have the Houston concert to go now. I’m sure it will be a magnificent finale to what appears to have been a wonderful tour. Although I can only follow your travels and concerts via “webworld”, it gives me and many others so much pleasure. So thank you. In a world that seems so full of aweful happenings, you and your gift of music, so generously given, are an oasis of all that is beautiful, peaceful and needful at this time. God bless you and keep you.

Boy WHO is this amazing writter <3
Getting kinda worried that what if this group might be turned into “World’s Renowned Boys’ Writter Band”! lol
We really, really lurv to hear from you guys enjoying summer in States 🙂
Thanks for sharing and, looking forward to more to come.. xoxo

Yay, I always wait for your AWESOME blog.

I always enjoy your blog updates. I tend to find myself laughing every time. 🙂 the picture of Liam being attacked by the goats is great!! And yes…Arkansas (and Texas actually) have a LOT of insects. All those locusts and cicadas make a lot of noise, too. Good thing Ben wasn’t under a tree when a locust shedded it’s skin.
God Bless all of you!! Can’t wait to see y’all again next year!!!

Hi guys, What a fantastic time you all have on tour, well deserved after you work so hard.
I have been to most of your concerts in the uk. My Gran would love to see you live but she is nearly 91 and couldn’t do the long wait outside for the perfect seats. I normally stand for three to four hours, but it is well worth it.. I hope you’ll have concerts in the uk once again this year, I wouldn’t miss them. It would be great if you could come to Northampton, All Saints or St Matthews would be perfect! Anyway keep up the good work. Take care on your travels. Thank you for such wounderfull music lads.
Matt

Thanks for this update, it’s always nice to hear of your adventures and experiences.

Wonderful blog. Liam looked like he had food feeding the Kids. Have a safe trip home.
I thought Ben liked Honey and Locus

I LOVE THIS BLOG! good job!!!
hahahahhaa i love the part where u mentioned Liam getting “attacked” by goats! It seems like u all enjoyed the trip so far 🙂
and I didnt know Ben had “insectophobia”
😀
thanks so much for the update ;D

It would be so great to see your videos!!! You are really cool!!

That said how many people can attend the tour you are doing now, but unfortunately for the distance that prevents us do …. Some day we Latin Americans can enjoy live their angelic voices? Some day this will give us joy? I deeply miss ……

Ahhhh! Run away from the goats! Love it, as usual. 🙂 Sounds like the tour’s been a lot of fun!

You mentioned earlier that Cracker Barrel is one of your favorite stops to eat. I too like Cracker Barrel. What foods do you guys like there?

I took a listen to the boys music after you had lunch with us on Monday, they are a very talented group of boys. We enjoyed having you all and hope the people of Texas have shown you a wonderful time. I feel blessed to have had the opportunity to have crossed pathes with such a inspirational group of young people.
Yours truly
Minnie Onza

Careful Liam. I believe those might be man eating goats! All kidding aside I do hope you all enjoy your stay here. You bring much happiness to people worldwide.

You boys were just amazing in St. Louis. Lots of new boys to look forward to following for a few years. Best of luck and a safe trip home.

Saw your final concert last night [Tuesday August 9th] at Tallowood Baptist and so enjoyed all the beautiful music! Great job boys and chaperone staff . . . and to Robert, so much credit and praise. I founded and conduct one of the largest boychoirs in the nation (Fort Bend Boys Choir) and many of my boys were in attendance as well. Reminds me how much hope we have for the future! Congratulations ~

Awesome blog!!. Great pictures! 🙂
I hope your concert last night went extremely well. I’m sure you did a great job!
Have fun and stay cool- a feat in itself right now lol.

Just so glad to hear that you are having such fun whilst performing your beautiful music in the USA. Best wishes for a safe journey.

libera was alsome it was my first time to go i seen them at houston man thoes kids have the most spectacular voices ever they are real blessed to have thoes voices to sing to the world angels thats what i call them lol. later

“Afterwards we did our first signing of the tour, which was really fun.”

Dear Libera, we were delighted to say hello, shake hands and get autographs. In all, I can’t help but feel we had as much fun as you did 🙂

Again, many thanks for a memorable evening.

I was blessed to be able to go to both Frisco and Houston concerts, and loved every second of both. The only part I didn’t like was teling them good-bye. Hope to see Libera back in Texas ASAP!!!

I love LIBERA and have their 3 CDS –
In Concert, The Best, and Peace, but I wanted
to request the words as I can not always
understand what words they are saying to the beautiful music…. Is there anyway to request the WORDS so I can read them as they sing?
I would so enjoy that, thanks so much and PLEASE let me know ok? To beautiful not to know the words they are singing, right, ++

Great blog! Thank you! Make sure you buy a cowboy hat in Texas… If you survive the heat!

I love this blog! And hang in there Ben! I hate bugs too!

I tried but I couldn’t attend any concert 🙁
It looks like you had a great time! I would really love it if you made another dvd in which you included some of this performances 😉

They are famous here in Philippines, not only in our country but around the world. They are lovely boys having a beautiful voice like angel. I feel like heaven when i heard their songs…. So wonderful, magnificent and powerful voice. How could i imagine where their heavenly voice came from?… I always played their music every time during my meditation…. A music of peace, tranquility,calm and inner joy. So God Bless Libera! Mabuhay!

That so interested! What a nice picture of Liam! (Valerie from China)