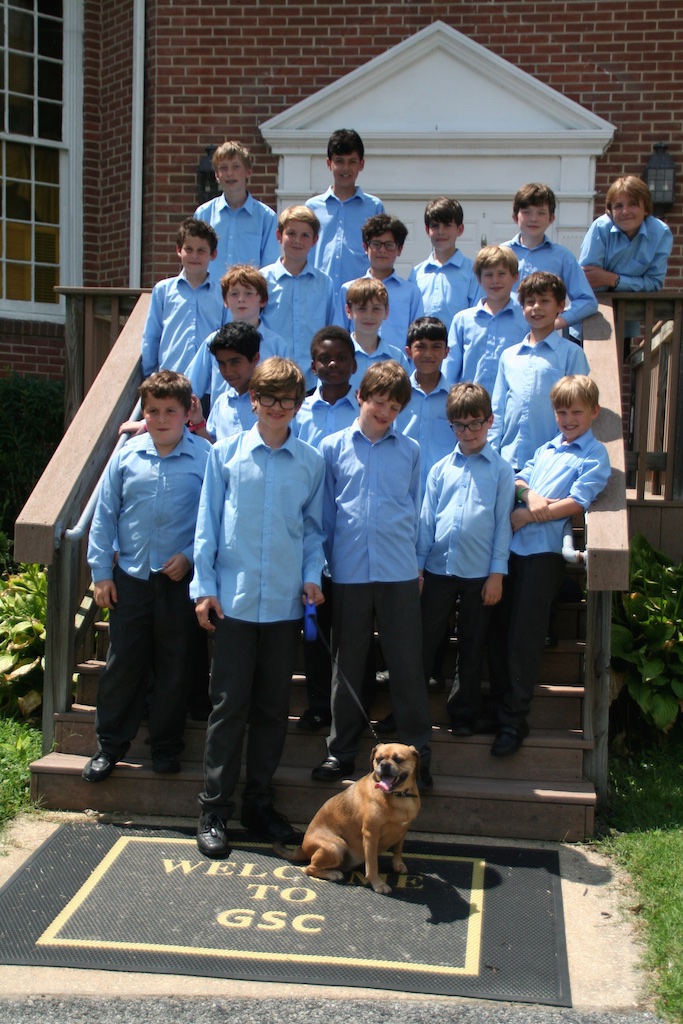 And so it was nearly time for us to move into central Washington. But first we met Brownie who was the dog of our Good Shepherd host, Renee, in Perryville where we rehearsed.  Brownie was very interested in our rehearsals. Then on Sunday we sang mass at Good Shepherd church before we sadly had to leave that area, and our hotel, to go to the Capital – the capital where Libera have only set foot back in 2007, for the Kennedy Centre Honours when the president and famous people were there. Even before we started our journey, we knew that now came the time to put on a good show.

On our first morning we were told that we were going sightseeing. What we didn’t know was that this was going to be quickfire sightseeing, one after the other. As temperatures soared and sunglasses came out, we arrived at our first destination; The Washington Monument. 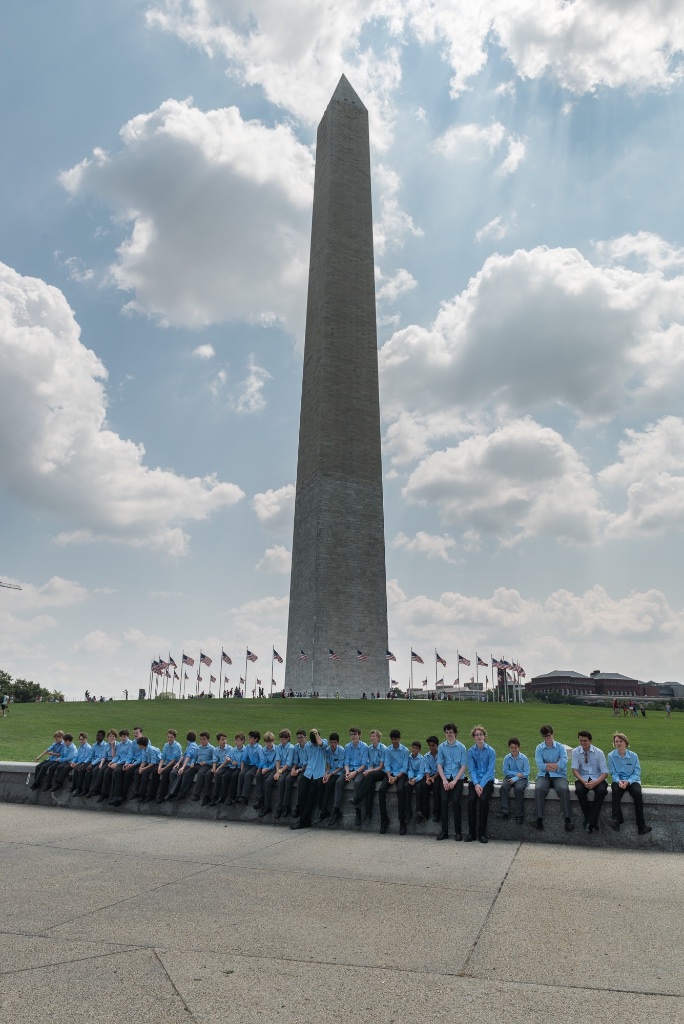 The park in which this historical monument was situated was greeted by 30 blue-shirted, London choirboys. One difficult aspect of Libera tourism is the pictures which include all of us. Having the sun in your eyes, the locals walking in and out of shot, the occasional pigeon: we have to deal with it all. Not to mention looking the right way, and getting the right picture in the first place. We always get our picture in the end…..

After the monument, it was a lovely short walk to the most famous “house” in the world. The White House. For most of us, this was the closest we have ever been to the famous monument, or even the president himself. Some of us wondered what would happen if they were president, but, we’ll leave that to imagination.

It wasn’t that long before it was time to move on to our next destination, the spectacular Lincoln Memorial. Of course, we’d all seen the famous movie scenes – like Forest Gump – but it was nothing compared to the sight of it in real life. We took some stunning pictures by the lake, and inside the memorial was a great sight as well. It was also nice to get into some shade, as the sun was blazing. 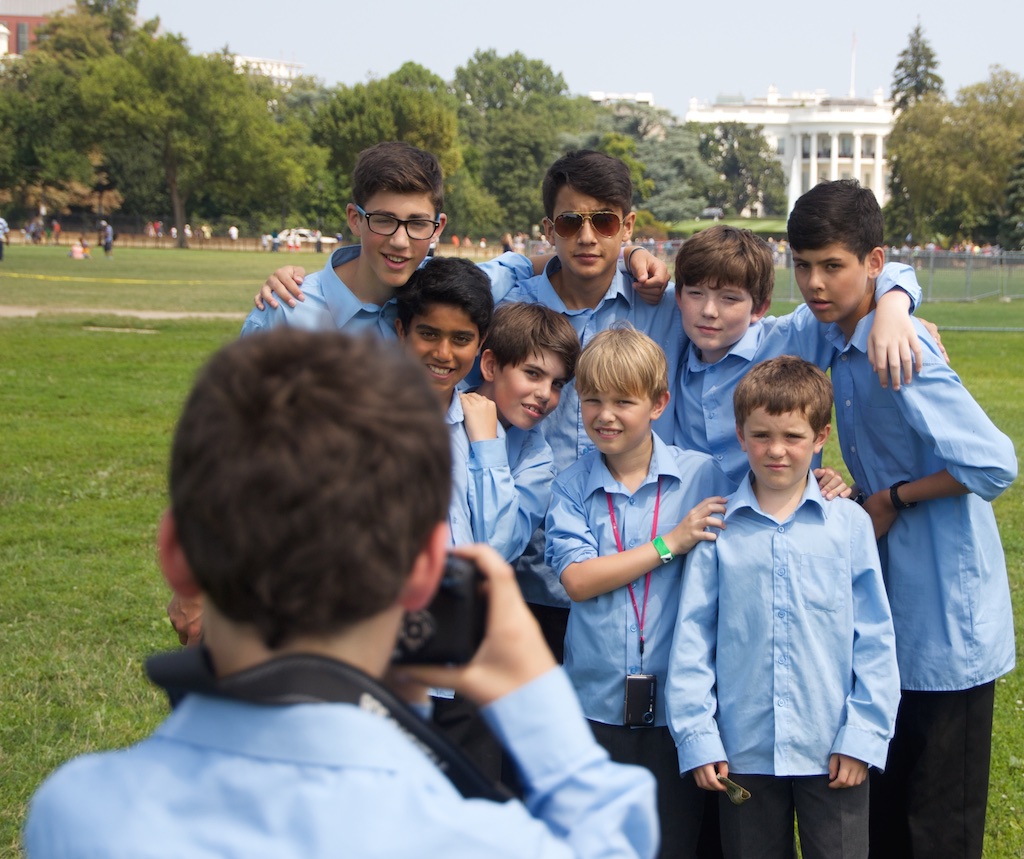 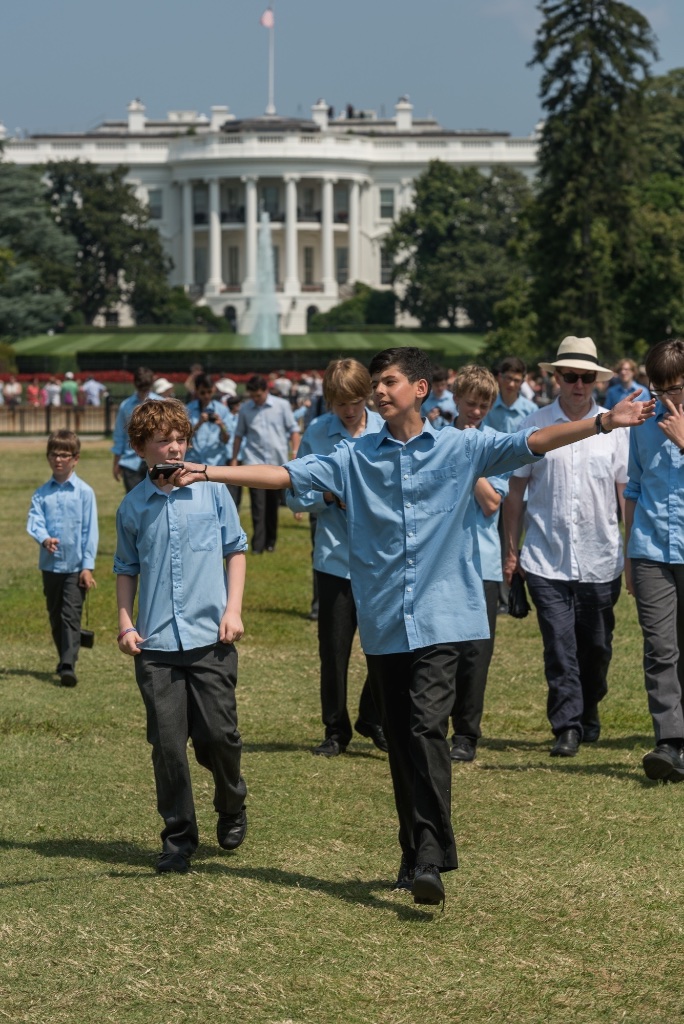 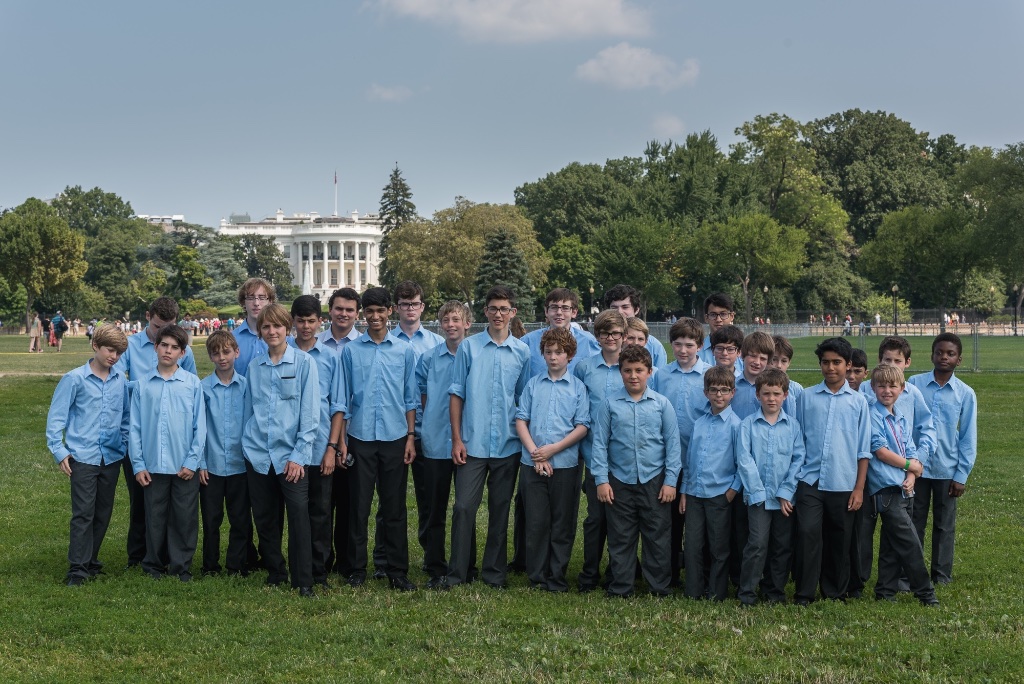 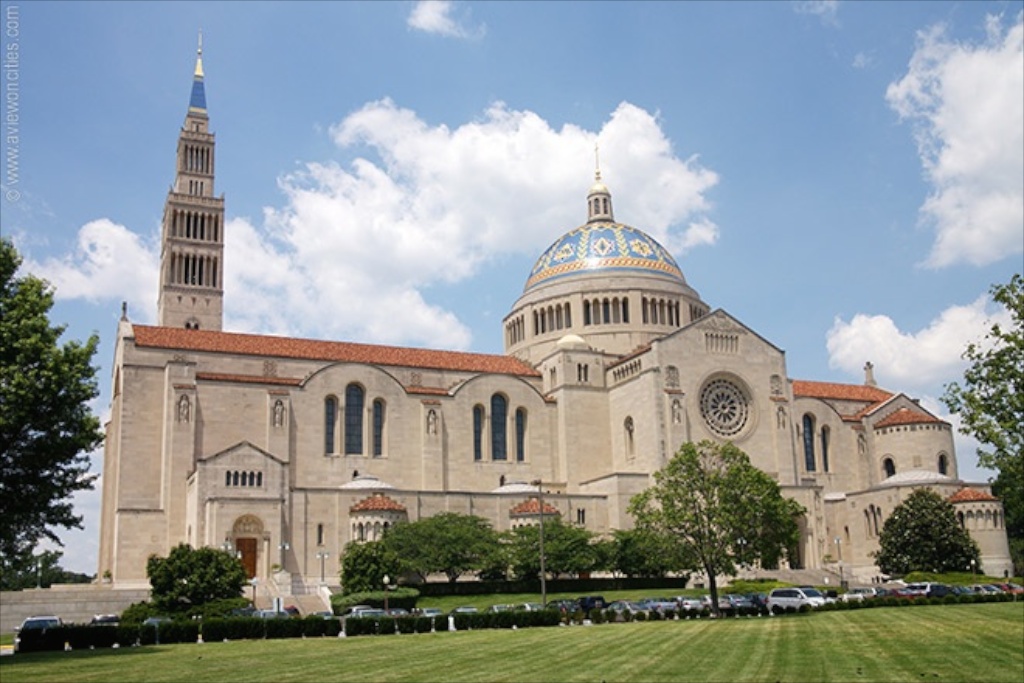 After the tourism, it was time for our first sight and sound of the Basilica of the National Shrine of the Immaculate Conception in Washington D.C. The name of the place was enough information for us to know we were performing in a large and important place – and large became an understatement.

As we drove up in our coach, the sight of the immense venue first blew our minds. We didn’t even step inside before the pictures started. However, it was taking those first steps and running through those first songs in the humungous, beautiful echo-ing acoustic, that we concluded it may have been one the most epic venues ever. The mere presence of the place excited us all very much for the two shows which were soon to happen…….. 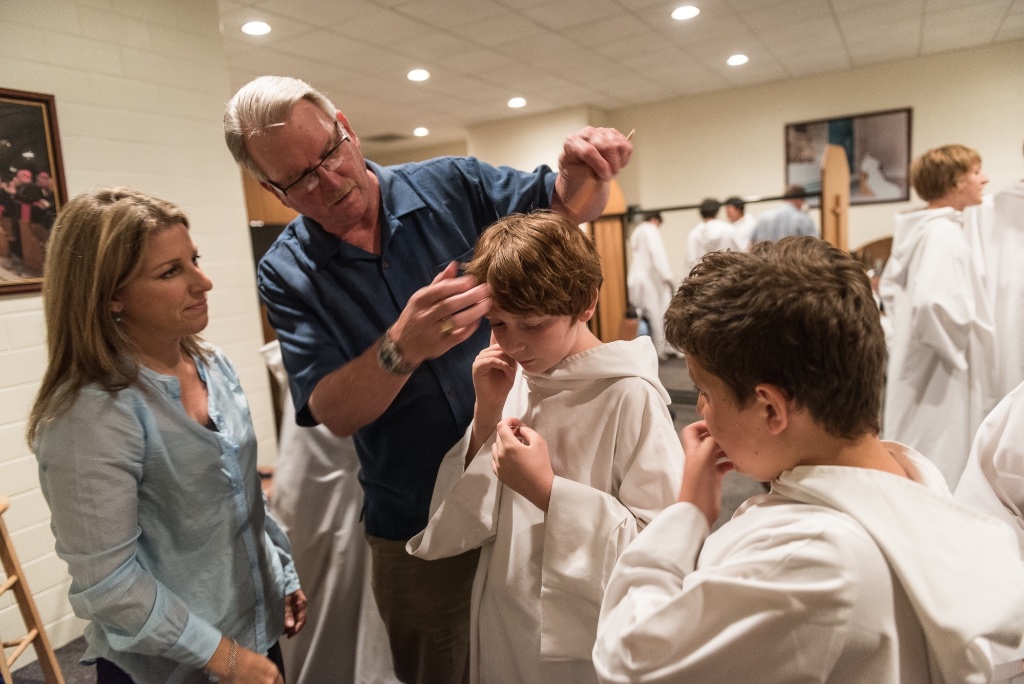 All 31 microphones needed to be hidden in the luscious locks of our hair. That includes preparing the box thing, the wire, the microphone, the hair clip, the headband, the combovers, the picking, the covering, the gelling, the hairspraying  – not that I personally need very much owing to my natural good looks.

We had to keep our robes on all the time with all the microphone stuff in place – even for teatime before the shows. So as usual we used our coats with nose-bag hoods to protect our shining white robes from food mess, with us having such good manners. On the way to the food place we found a life size Pope Francis hanging around in the crypt! 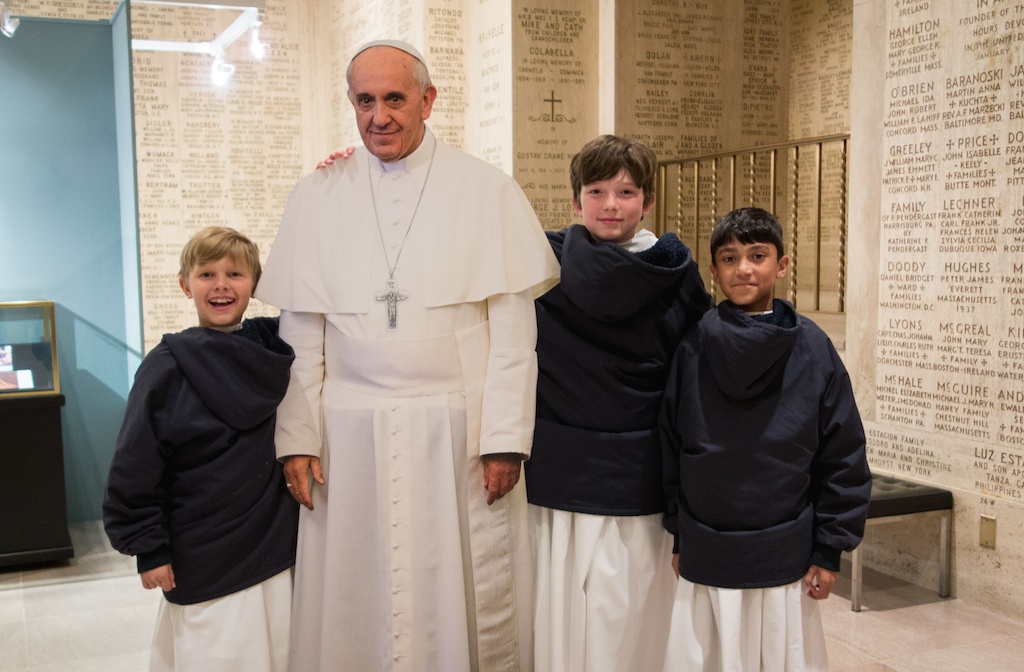 With all this preparation, you’d think we got bored. In fact it merely excited us more. It was like waiting for your favourite TV series to begin, except with more choirboys than your average drama or soap. We also kept ourselves occupied with recapping songs in the show, reading, laughing at the programme photos of ourselves, and of course talking rubbish with each other. 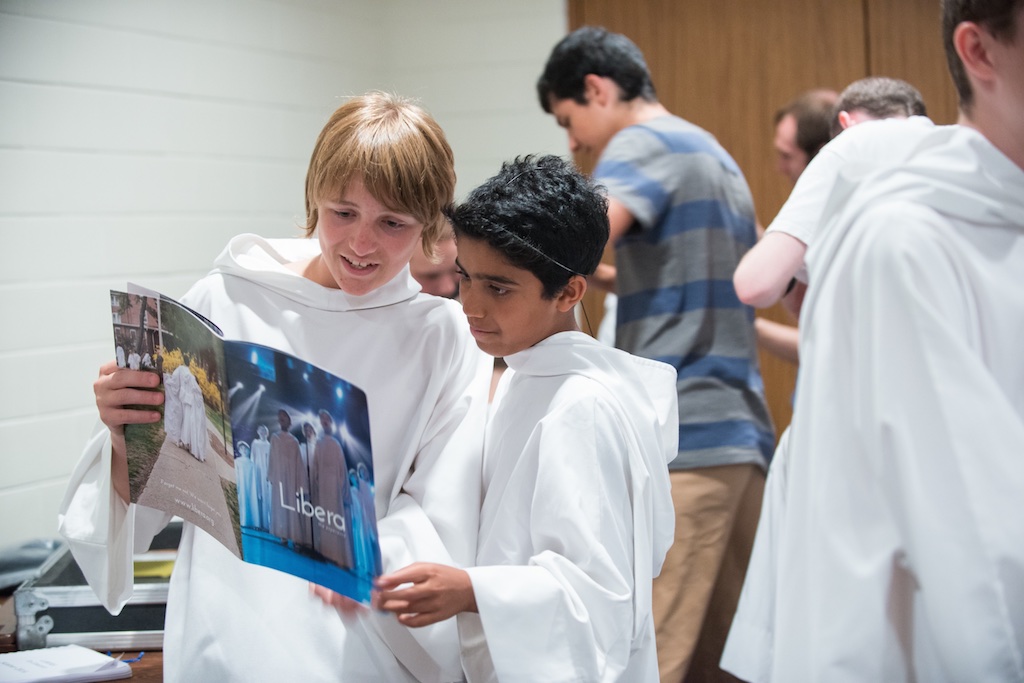 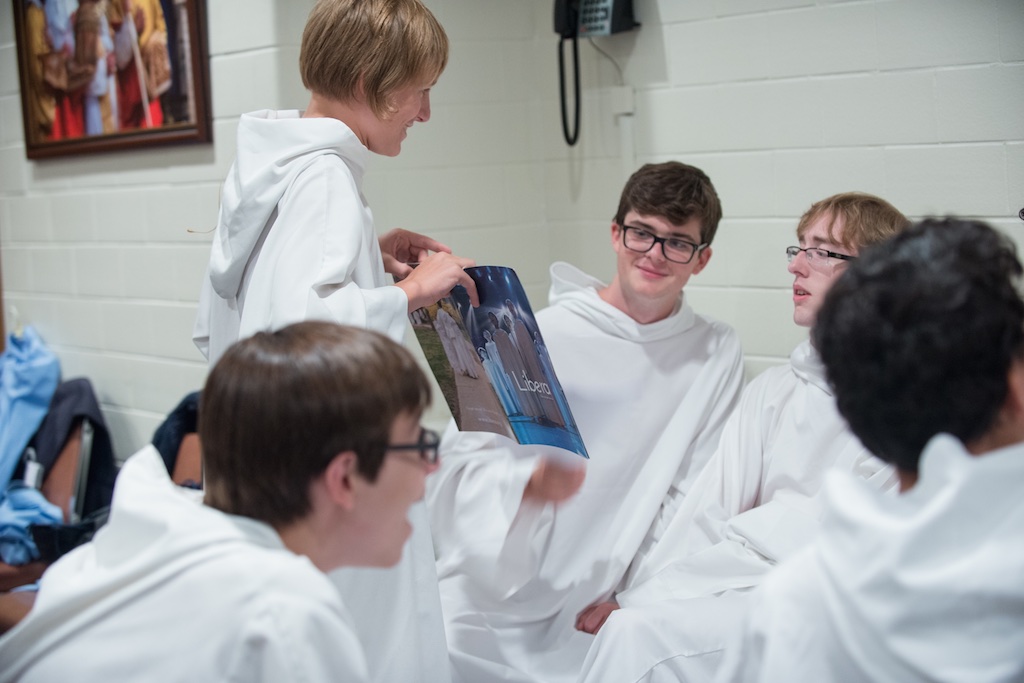 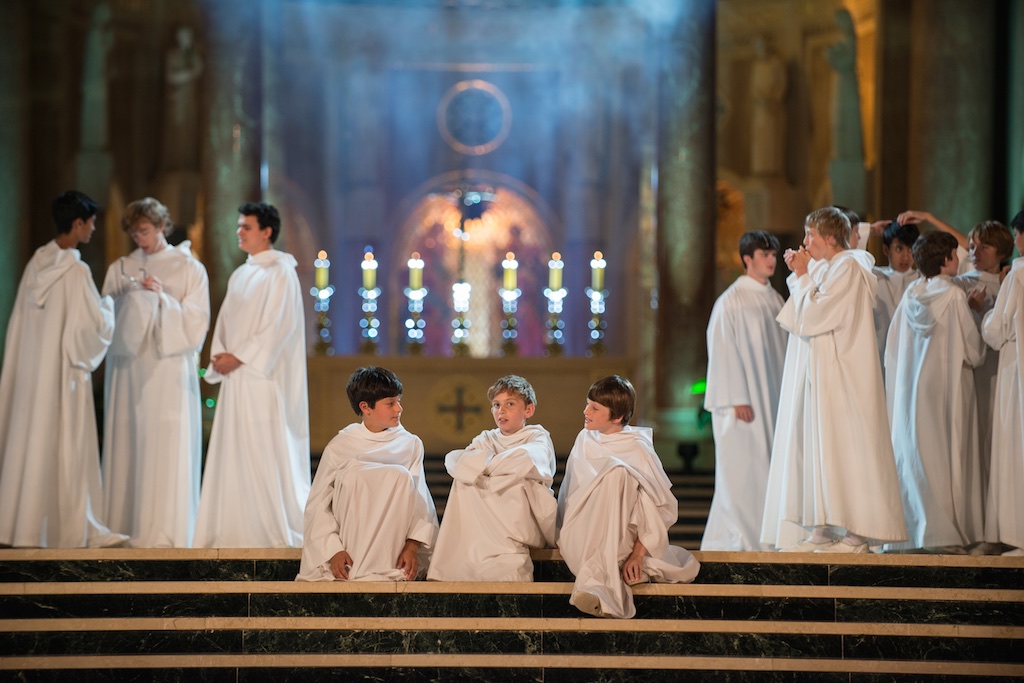 With our soundcheck done, it wasn’t long before the show started. Our first show was with a smaller audience, for the purpose of getting camera shots that wouldn’t be possible with a large audience. Nevertheless, we were ready to put all our practice into action. It was time to perform.

We realised from our first half that the music and acoustics of this place was the perfect match for our voices. The new songs were especially fun to perform, and with the lights and the cameras: we were eager to perform again. 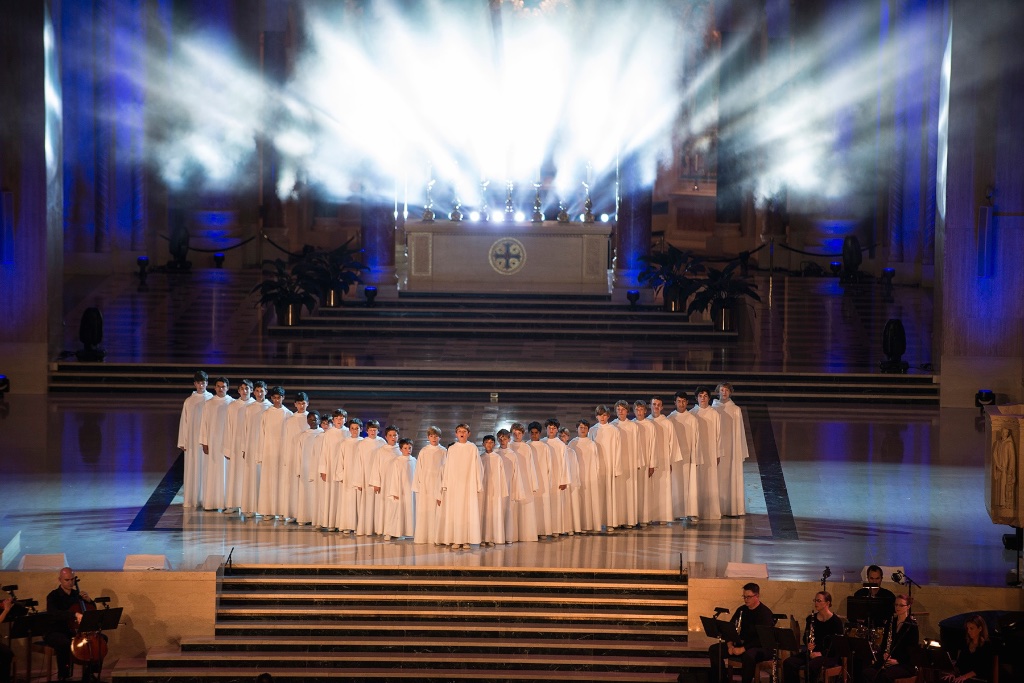 The next day we began recapping last night’s show to make the second night even better. After all the make-up, microphones and madness, the time came for us to be called up again. The difference? The 2,000 strong crowd we were ever so grateful for. 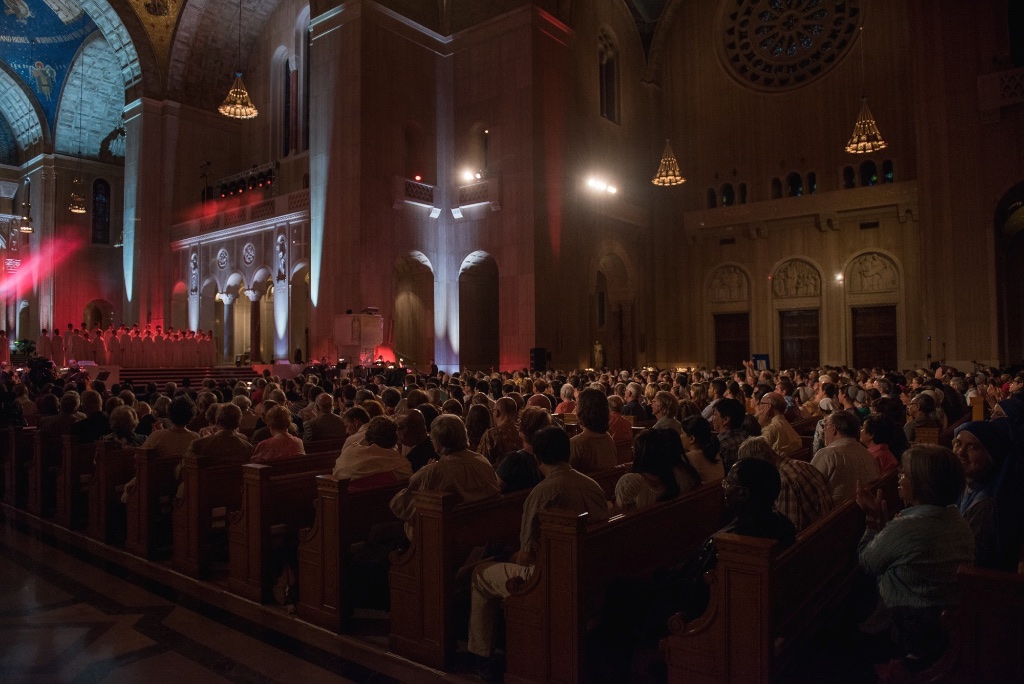 Not many performances were as special as that one. The reception we received was as warming as ever, even if we did have to wait quite a long long time between songs while the cameras moved. However we did have to go to bed eventually, after we said our thank you’s and departed from the truly immaculate and brilliant Basilica of the National Shrine of the Immaculate Conception, of the wonderful Washington D.C. 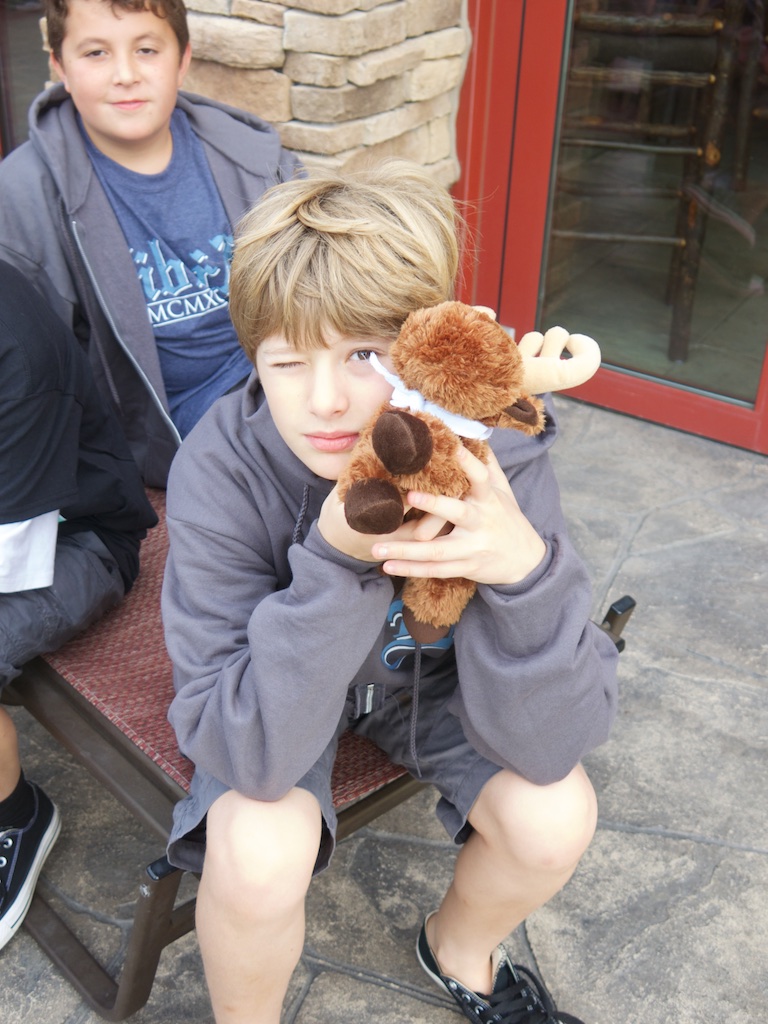 One of the really cool things we forgot to mention was the fantastic new Libera T-shirts and hoodies and wrist bands and books and drink bottles, our choice of which we were grateful to receive the next day. We were also very grateful to receive the kind words and praise for our show that last evening; it made the hard work worthwhile. 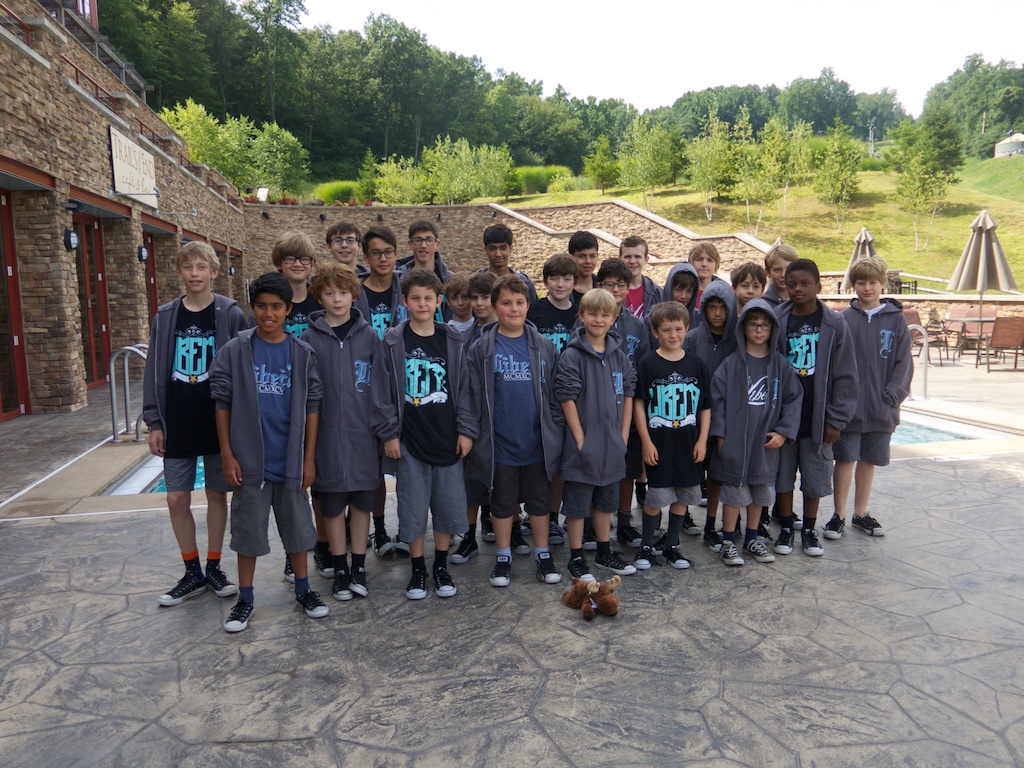 Dear Libera: It is we who should be thanking you for coming to America and giving us that wonderful concert on 7 August 2014.

Indeed, thank you for this blog 🙂

“it made the hard work worthwhile.” How true. That’s why I thanked you for the time and effort that your families allow you to invest into something like this that makes a positive difference in people’s lives. Our teaching pastor reminds us how nothing of value ever comes without hard work. And in our era of conveniences and digital ‘time-savers’, it’s hard to remember that some good ‘elbow grease’ makes for a good marriage, family, career, and of course, finding fulfillment in God’s program and his Word. Great job, guys – keep it up!

What a beautiful concert! Thank you for coming to the U.S. This was our first experience of Libera live. It was such an amazing heart moment for us and one that we will always cherish. Our family is deep into the choral tradition and it was a blessing to be able to take our children to see you perform. There’s nothing like Libera anywhere else! One of the things I love is how Libera not only has a unique visual style and sound, but that you all genuinely seem to love singing together. I love how even older members (like Sam and Josh) stick around. I hope they never leave! Fantastic legacy you are passing on to each other and to the world. God’s blessings over you, and come back, y’all! 🙂

Hope the T-shirts become available for us “FANS”. Ya know? Looking forward to the new show and purchasing the DVD. You dudes are awesome!!

I Did not know the National Shrine of Immaculate Conception of Washington DC. Discovering it throught the eyes of young boys was charming.

Leave a Reply to Gary in Florida Cancel reply